I'll be passing through Takayama Japan in mid-March, arriving by train from Toyama, staying one or two nights, then moving on by train to Nagoya.

I assumed that everything was happening in the town itself, but when I looked for hotels, they all seem to be located in the mountains to the east. What's the story there? Is it worth staying in the mountains rather, given the great rates, and in March? And is there convenient affordable transport from the town up to the mountain accommodations?

For example, I was looking at Nakao Kogen 4* hotel, and Kayeza Group 4* as well, with breakfast and dinner options at amazing rates.

The key to understanding what's happening with your hotel search is that Japanese cities are administrative units that cover a lot more than the actual city core. For example, Tokyo-to (metropolis) extends far west into basically uninhabited mountains and 1000 miles south to cover a bunch of tiny islands too, and Takayama-shi covers most of northern Gifu prefecture: 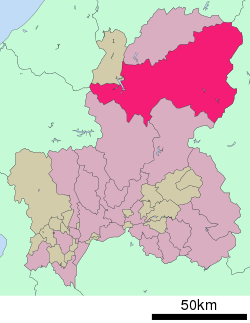 So. The Japan Alps area of Takayama-shi is known for hot springs inns (温泉旅館 onsen ryokan), and most resorts in the mountains focus on this. There's also skiing in the winter (you might still manage this in March) and hiking in the summer (but most trails won't open until June-July).

Takayama the actual city has attractions too, most notably the Hida Minzoku Folk Village, but other than that it's "just" a smallish city and not a major draw.

Personally, I would definitely go with the mountain hot springs: I've stayed at one in nearby Oku-Hida and it was one of the best I've been to in Japan (and I've been to a few!). Public transport in these parts is pretty spotty, so renting a car is a good idea, but most ryokan can come pick you up from the nearest train station if you arrange this in advance.

Not the answer you're looking for? Browse other questions tagged japan or ask your own question.

6
Sacred mountains in Japan?
4
Good mountains to camp on in Japan
5
Why isn't the direct route between Nagoya to Osaka covered by the Takayama-Hokuriku Area Tourist Pass?
1
Is there a local bus from Rinku Town (Osaka) or thereabouts to Yao Station or thereabouts?
5
Where's this lookout over cherry blossoms and town on top of hummock, surrounded by other knolls, in Yoshino, Japan?