Best way to dispose of a carry-on bag in Hong Kong airport?

An odd question, I know.

I'm expecting to arrive with a full-size carry-on, containing some stuff I brought on the flight but don't want to carry any further, some stuff I'll transfer into my main baggage between collecting it from the belt and dropping it off with WFS for onward delivery, and some stuff I'll carry with me in a much smaller bag waiting in my main suitcase. I don't really want to elaborate on why this is the case as it will distract from the main question - nothing nefarious is going on, I just have a slightly complex itinerary and don't want to lug any more than I need to at any point.

I'm then left with an unwanted carry-on bag containing a few innocuous cheap unwanted possessions (nothing unpleasant, not even any dirty clothes). I'll deliberately use an old and slightly broken (torn handle) bag that I've already replaced and is currently just cluttering up my house. If it were a soft bag I'd roll it up and stuff it in a litter-bin, but it's a somewhat rigid two-wheel trolley bag that won't fit in any normal bin.

What I obviously don't want to do is leave a bag just lying around in the airport and trigger a security scare. My current best plan is to casually drop it onto a loaded baggage belt, where it can go round and round until eventually the baggage handlers recover it. There will be no obvious means of identification on it, and I will leave a note inside in English and Cantonese saying that I don't want it any more, to save them wasting any effort trying to track down an owner. Then they will presumably just dispose of it by whatever means they have for unidentifiable lost possessions.

Anyone have any better ideas? Maybe this is all needless subterfuge and there's actually a handy bulk rubbish container tucked away somewhere that I could chuck it into? In or near the baggage reclaim, ideally.

Ask at the airport information desk, lost property, or a luggage shop (thanks @Fattie). They most likely know some way of ensuring the contents gets given to a charity or at least recycled properly.

Subterfuge will at the very least create overhead for the airport personnel, who will have to either destroy the contents safely or hold on to it for a long time before disposing of it. And you really don't want to have to explain yourself to airport security if this spiel is noticed.

The fundamental problem is that what you want to do - leave a bag somewhere and depart without having it associated with you - is exactly what a bomber would want to do. Therefore, I do not believe there is any way to do this without risking being mistaken for a bomber.

I think that trying to leave a bag at an airport will inherently cause a security scare. If you are stopped at the scene, it will be unpleasant. Hong Kong airport police carry submachine guns.. If not, even if it is found out that your bag was harmless, you may be suspected of intentionally leaving your bag to cause a panic. Given the heavy surveillance normally found at airports, it is quite likely they will be able to identify you, and you may face legal trouble.

I would strongly advise against doing anything of the sort. Suck it up, take the bag away with you, and dispose of it in a less sensitive place, far away from the airport.

Tell a member of airport staff that the bag is broken - perhaps even break off something to do with the handle or a wheel (in a toilet, less visible) as these bags aren't so robust. Tell then you didn't have much in it anyway, and where can you throw it away.

Leave the bag, fully emptied and all pockets opened, next to the largest trash can you can find. A note saying RUBBISH/垃圾 inside would also be nice.

This way it's not going to cause a security scare, and the airport's hassle of disposing it will be minimal. It's still basically littering though, and the right thing to do would be bring the bag to somewhere else where it can be properly disposed of.

How do you dispose of a bag at airport A without creating a hassle for yourself and the airport staff?

You send an email to airport A's customer service and ask them how they would like you to handle the situation.

Just explain to them that you want to get rid of the carry-on bag, and a few things you do not need anymore either, after you have gotten your luggage after the flight and ask them where do you leave your no longer useful bag?

Remember that many countries have restriction on items, food etc., that they do not want into their country, these items have to be thrown away in the appropiate bins for destruction, not left around in an unaccompanied bag.

Take it out of the airport - I know, a bit more lugging than you'd like, and offer it to homeless folks who might actually be able to get good use out of it. Alternatively, if you see someone really struggling with carrying a lot of items at the airport (lots of airport shopping?) you could offer it to them before even leaving the airport (but after passing through customs).

Many of the current answers focus on bomb/terrorist-related security concerns, however the first thing that came to my mind upon reading the situation was one of drug smuggling. Security may be concerned that you are abandoning the bag as it (or you) contain illegal substances. As others have mentioned, leaving the bag open and with a note doesn't mean it isn't a security risk and in fact hiding drugs in the lining of suitcases is a common method used by smugglers. I think l0b0's answer is the best course of action if you absolutely must leave the bag at the airport, but be aware that security may want you to wait while they check the bag for anything illegal. This is a much better solution than risking a misunderstanding by dumping the bag in the airport. Of course, just taking the bag out of the airport and disposing of it properly would cause the least hassle for you and least concern for airport security.

You could use a thin, flexible duffel bag that you can roll up to a compact form.
For example: 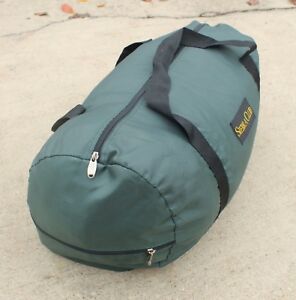 This bag has similar capacity to a carry-on when in use. After the flight, you can transfer any items to a larger checked bag and/or trash bin, and the entire bag folds into a relatively thin, flexible disk with the profile of the circle at the end (the horizontal zipper closes the bag into its own pocket and holds it in that form). You can roll this up further and fit it in a reasonably large pants pocket, or in/attached to the larger suitcase. Then you can use it again in the future, as many times as you want. (Or you can more easily give it away / throw it away.)

I would recommend taking the bag to lost property. You can either tell them the truth or tell them you found it. That way you won't cause a security scare, and the bag may get a new owner.

I'm going to go with a different angle here and just outright recommend you don't go through the hassle of disposing of it at the airport. It's a very unusual request, airport staff are busy enough as it is and lots of people have raised sensible points about perceiving it as a security risk. Plus, disposing of suitcases is a pain, as they're not readily recyclable.

If it is not immediately obvious that there is nothing inside, then it is a potential security risk. If the case is made from fabric and was checked up until the point of disposal, then you could pack scissors and cut the fabric off, roll it up and throw it away, then bend the frame until it's also small enough to fit in a bin.

Anything else is just turning your problem into someone else's problem.

Not the answer you're looking for? Browse other questions tagged luggage airports hong-kong or ask your own question.

30
What is the most efficient way to pack a bag?
8
Best way to sleep at Vancouver International Airport and wake up on time?
5
Emirates International Flight and carry-on baggage. Can I take a laptop backpack in addition to the one carry-on bag?
3
Hong Kong airport transit hotel
2
What happens when you are asked to place item in the hold (checked-in) luggage?
3
Transporting workout supplements in both cabin and checked luggage
6
Can anyone actually parse Aeromexico's excess baggage policy?
10
Can I remove other people's baggage from a conveyor in baggage reclaim?
9
Delta carry-on policy
21
Accidentally left luggage abroad, and it's going to get shipped to me by a friend. Do I need to pay customs on getting my stuff back?