Denied boarding: Received ETA for Australia and have confirmation email, but it did not show up on their computer when checking in with airline!

I received this email from eta.contact@ivisa.com.au saying this:

When I tried to check in, the airline staff said that I was showing up on the computer as having no ETA. they swiped my passport right in front of me and showed me what it said on the computer screen. I was denied boarding and had to buy a new ticket! They said that having the confirmation email which says that the ETA has been issued, is not enough, and that we have to wait for it to also register on the computer system, and that this can take between 5 minutes and 2 days.

I have seen nowhere online where it says this (about 5 minutes to 2 days waiting time between receiving the ETA and being allowed to travel). Is it really true?

Also, should be done about this computer glitch? The airline wouldn't give me a refund because they said it's my responsibility to make sure I have the visa in time (I did have it when I tried to check in though!).

I have checked the status of my ETA on the official website: 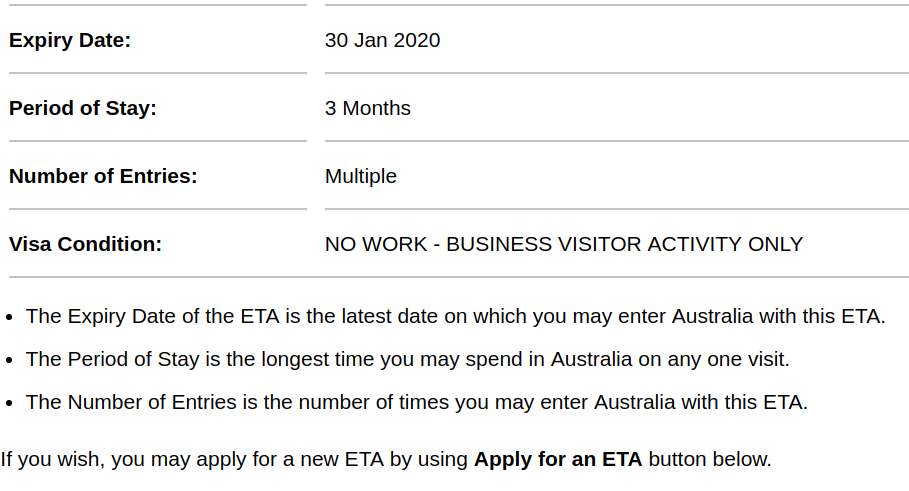 This means that ivisa.com.au was not a scam and the Australian government does have my correct passport number as having an ETA in their system.

The short answer is I suspect that your ETA was not transferred to the appropriate system in time, possibly due to a system issue. The airline could have used an alternative procedure to verify your ETA, but chose to deny boarding instead.

Firstly, there are two systems which passengers interact with when travelling to Australia on an ETA. They are described extensively in this Australian National Audit Office report.

What appears to have happened is that your ETA application was processed correctly by the ETA system, but the visa record was not updated in time to be accessible by the APP system when you check in. As a result, APP returned a do not board message.

What the check-in agent should have done is to follow section 4.5 of the APP manual, which states (emphasis added):

If the check-in agent receives an 8502 <DO NOT BOARD> they should:

Had the check-in agent followed this procedure they probably would have found the ETA. Given the discrepancy, the check-in agent would then call the Australian Government's Border Operations Centre (BOC) to have it sorted out. The BOC can approve a government (G) override of the APP system to allow you to board.

I don't believe anyone other than the airline and/or the visa company are going to be able to give you a definitive answer (and they most likely won't actually do that, even if they can), however if I had to guess here's what I'd say happened...

You obtained your ETA via a third party, and not via the Australian Government directly as is normally recommended. In and of itself doing this isn't a problem, and there are many parties that can obtain ETA's on your behalf, including some that are (in some sense of the word or other) scams, but also many that are not.

The company mentioned in your email, "IVisa Services" from North Sydney was a valid business name, however their business registration was canceled in 2016. This could potentially be a sign of a scam, however in this case I don't necessarily believe it is.

ETA's are normally processed and approved instantly, however around 10% of them will take longer to be approved, generally after they are manually processed by a human. This can take anywhere from minutes to hours (or in the worst case, days). Even then, this presumes that the company you obtained the ETA though submitted it to the Australian Government immediately, which it's possible they did not.

ETA's are generally verified automatically by the airline systems. In the event that the validation fails the airline staff have a number they can contact to verify the reason for the failure and potentially receive approval to board the passenger if there has been an error.

Now, putting all of that together I can see two possible reasons you were refused boarding :

Not the answer you're looking for? Browse other questions tagged air-travel australia eta or ask your own question.

2
What does "APPS System has denied boarding for pax" mean?

14
What if you don't get an ETA for a flight to Australia?
3
Unable to check my Australia ETA status
7
If a dual French-American citizen wants to visit Australia, should he use the eVisitor or ETA visa?
1
How can I retrieve my Canadian eTA?
6
Australia ETA with prior speeding ticket
1
Australian ETA with Reckless Driving (misdemeanor)
16
Why is the Australian ETA application fee cheaper on a 3rd party website?
10
Can an Airline board you at departure but refuse boarding for a connecting flight with the same airline and on the same ticket?