GPS when flying over the ocean

How can I see my location when flying over an ocean? I know that many airlines show you that on your screen, but I'm wondering if there's a way to do that on a phone, and without an internet connection.

Any OS is fine, Android, iOS, or even Windows Mobile.

I assume this won't be dangerous in any way as the phone would be on flight mode, and GPS is passive.

I use OsmAnd for this sort of thing. There's a base world map that's not super detailed at the city level, but is certainly more than adequate for tracking the location of any passenger flight. It's also very helpful for having an accurate, detailed map of your destination before you even figure out how to get cell service after you land.

There are some things you have to be aware of. For example, you might think that it's enough to turn your GPS on, start your app, and see your position, as simply as that. Well, not really!

First of all, the plane shields from radio waves, so you are almost always forced to keep the phone next to (even against) the window to get your first fix. The farther you are from the window, the harder it is. After the first fix you can usually move a little, but it's hard to tell how much. Just try it. This means you'd better book a window seat.

Then, consider that there's a huge difference between a cold, a warm and a hot start. "Cold" means that your GPS has no idea where the satellites are, because you haven't used it in many days, so it must get the position of the satellites from the satellites themselves, and they transmit it slowly. When you have a data connection the phone can normally download the data from the Internet (this would be "Assisted GPS" or A-GPS), but on board a plane it's normally either not available or very expensive. So: when you are still on the ground, start your GPS app and wait until you have a fix. This will make everything faster (it's the so-called "warm" start).

One more disclaimer: for some reason the altitude measured by a GPS is not accurate at all. Once I compared it with the one shown by the plane's infotainment system, and the difference was more than 500 metres (!!!). It probably doesn't matter, but you might want to know it.

Now the bad part: GPS receivers can be very different from each other, and they can have unexpected problems.

And all these phones have always worked perfectly when used in a car or on foot, which is what they are designed for. Apparently, the poor reception due to the plane's shielding, combined with the high speed and altitude, gives GPS receivers a hard time. And I don't think there's a way to know how good your GPS will work on a plane, apart from trying it.

Finally, the apps. On Android I use GPS Test. It's free, and it's great for getting the coordinates, altitude and speed, but it doesn't have maps. To see where I am I normally use TomTom with offline maps, which is also free as long as you don't use it to get directions. But obviously the maps don't cover the oceans, so you need something else.

I use maps.me for offline maps.

To be able to receive a GPS signal, I have to sit next to a window and push my phone against it. This sometimes works.

I've used both Here maps and maps.me on the airplanes. It seems Here has much wider coverage. While you can't download maps of oceans, you can still see the real globe when zooming out and know where you are. That's the most important point compared to maps.me (which only zooms out to a world map instead of a globe that you can rotate around) 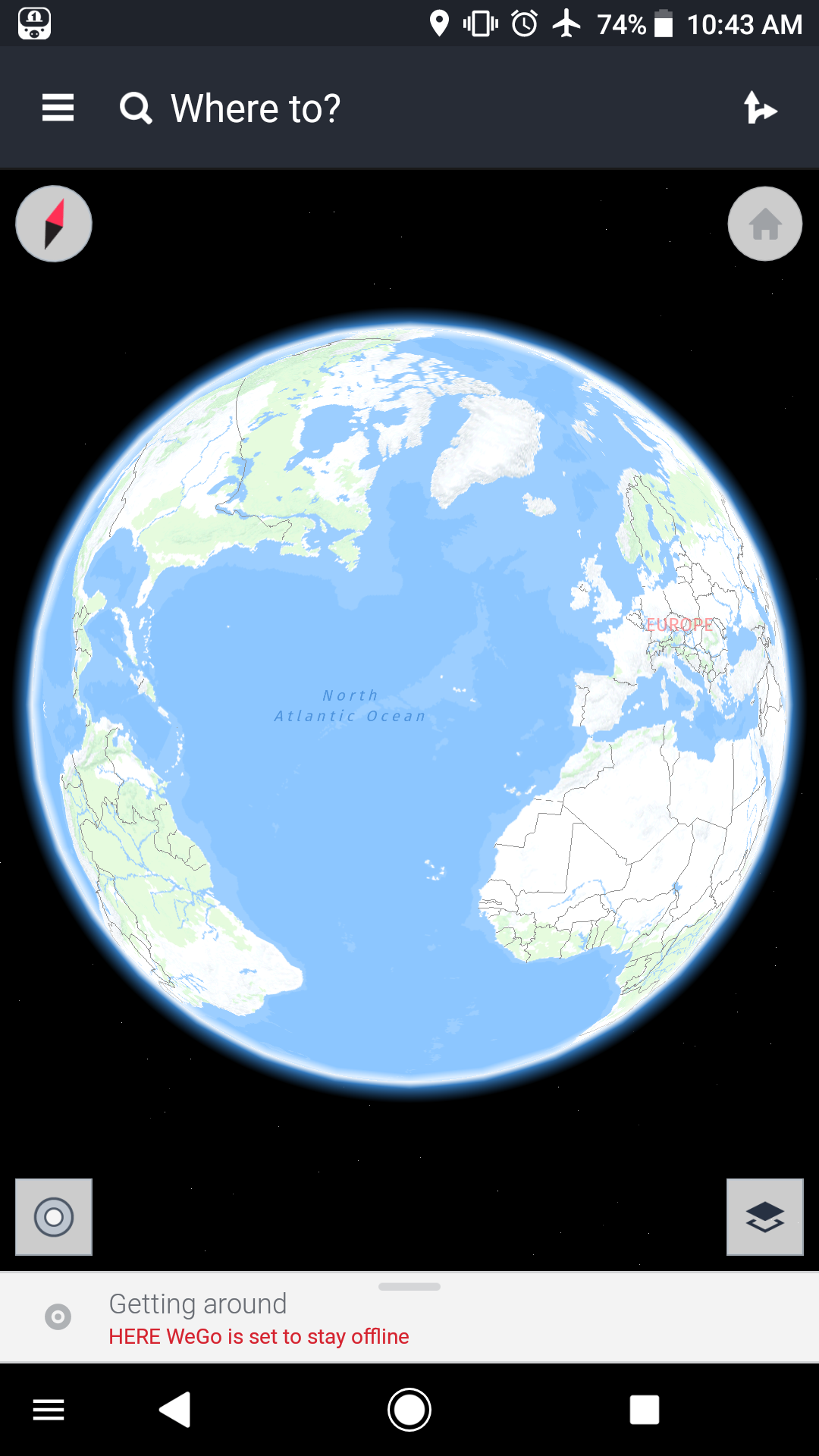 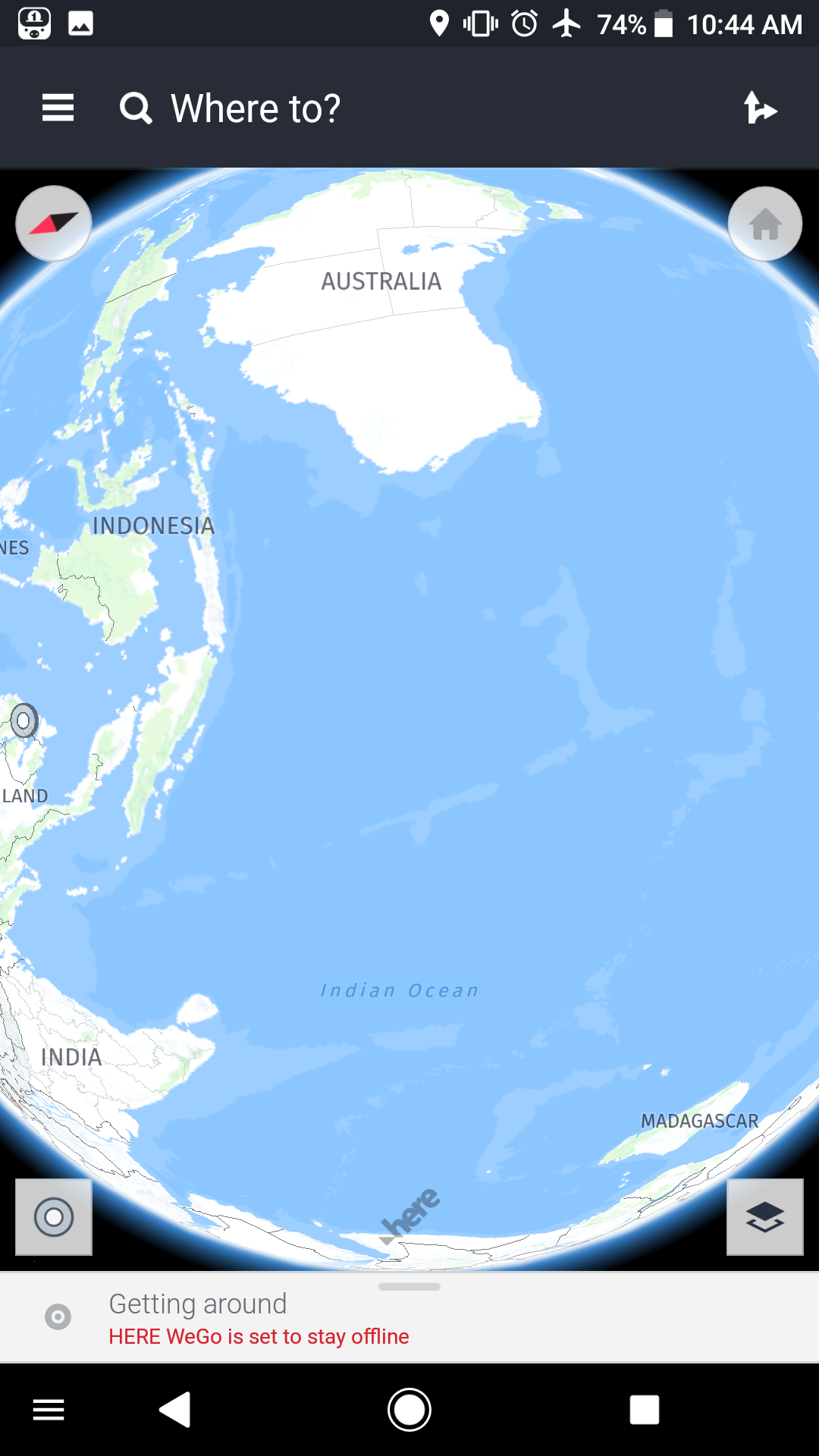 Below are some of it in action

Of course it'll be better if there's an offline Earth map. Unfortunately Google Earch doesn't support offline mode and the best you can do is viewing the area to cache it before the trip

While GPS is prohibited by many airlines, such as United, under a broader electronics ban, many/most travelers have GPS enabled inadvertently.

If you are one who has 'forgotten' to turn it off, any GPS app on the phone will give you a location...provided you can reliably receive the signals within the aircraft.

Also, you can see your location retroactively in many regions by using flight tracking services such as FlightAware.com.

Not the answer you're looking for? Browse other questions tagged air-travel maps gps-navigation or ask your own question.

22
Are there cheap GPS or other navigator devices with downloadable maps for the whole world?
3
GPS coordinate problem
2
How can I show my GPS location on a map from my phone?
3
Good GPS device to tracking my travels?
10
Android app for offline GPS maps
46
Why does my phone's GPS not work in China?
8
Where can I find GPS-device-compatible maps of Georgia?
3
Does economy class on JAL have power points?
5
How can one can convert a Denso mapcode into GPS coordinates or a human-readable address?