Under what situations can a passenger be restrained by flight crew?

I came across a news story recently where a passenger was restrained using tape for unruly behaviour on an Icelandair flight.

Under what situations is a flight crew allowed to take such action, and what methods of restraint are they allowed to use? 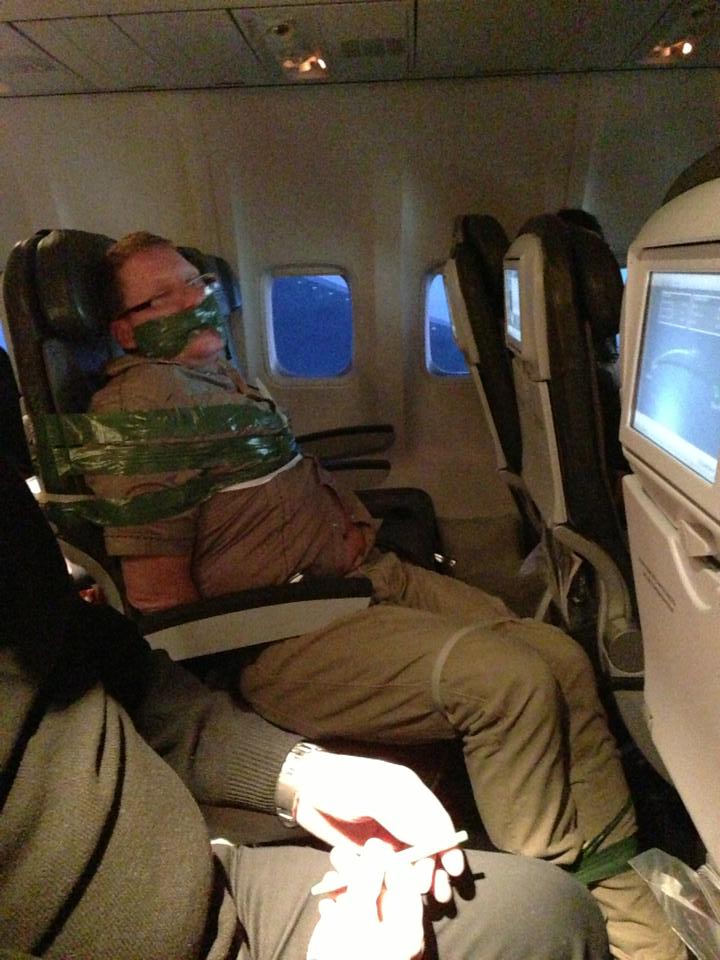 Laws are a regional thing, and while many flights are international, whether or not the crew's actions are legal will depend heavily on which country the court proceedings take place in. My expertise is only in United States law and the FAA regulations, but similar regulations exist abroad as well. Here are some key points:

1: The airline (and in particular, the Pilot in Command) is ultimately responsible for the safety of the flight, whatever that may mean. If something goes wrong, the pilot (and by extension, the crew acting under his authority) has both the responsibility and authority to address the situation to preserve safety, however they see fit.

2: For the duration of the flight, the instructions of the crew are law. Literally -- it is illegal to disobey the instructions of a crew-member. This sounds like a bit of a stretch, but this interpretation has held up so far. The actual FAA regulation says:

14 CFR 125.328
No person may assault, threaten, intimidate, or interfere with a crewmember in the performance of the crewmember's duties aboard an aircraft being operated under this part.

And it turns out that disobeying any instruction from a crewmember constitutes interference with that crewmember's duties, whether or not you intended to interfere with his/her duties by disobeying.

A good example of this in court is United States vs. Meeker -- here's the narrative, trimmed for space:

Meeker ... had several alcoholic drinks prior to the flight and after departing Miami, left his seat, made bizarre remarks to a female passenger and later began hitting another passenger ... In response ... the co-pilot entered the cabin from the cockpit to investigate, observed Meeker arguing with another passenger in the aisle and instructed both men to return to their seats. Meeker refused to be seated and struck the co-pilot who thereafter returned to the cockpit. Meeker was wrestled to the floor where the pilot, who had come from the cockpit, and passengers subdued him and strapped him down. The pilot decided to divert the plane and to land at Las Vegas, Nevada, where Meeker was taken into custody.

Meeker argued that in his refusal to comply with the request to return to his seat, he was not doing so with the intent to interfere with the crew's duties, nor was he interfering with the pilot's ability to control the aircraft. The court said it didn't matter. Meeker got consecutive prison terms and fines for his behavior, which included consecutive sentencing for both his physical assault on the crew as they restrained him and his refusal to follow their instructions.

The moral of the story is this: if you're in a position where crew decide they have to physically restrain you, chances are good that you're going to prison already. Fighting them about it means you'll be going to prison longer.

Looking over cases, it appears that you can expect at least 6 months in prison, no more than 20 years, and typically around 2 years.

The BBC actually has an article related to this entitled "Who, What, Why: Is it legal to restrain air passengers?". It explains:

A number of conventions - including the Tokyo Convention (1963) and the Montreal Convention (1971) - address the issue of ensuring safety and discipline on board a plane.

The Tokyo Convention emphasises that the plane's captain is in charge of the safety of the flight and thus decides whether a passenger needs to be restrained. Before landing, the captain must notify the authorities in that country that a person on board is under restraint and of the reasons for such restraint.

The Montreal Convention governs an airline's responsibility to their passengers during an international flight, says James Healy-Pratt, head of aviation at Stewarts Law.

He says that while aviation is international by nature, there is no single over-riding convention regarding the treatment of unruly passengers.

Passengers' behaviour is subject to the laws of the country in which the plane is registered, says Healy-Pratt. And what the crew can and cannot do is also governed by the national laws of that country.

In addition, the IATA published a "Guidance on Unruly Passenger Prevention and Management"(1.29 MB), which states:

Cabin crew are in a unique position to deal with the unruly passenger problem, as they are not able to escape the situation or to call authorities for assistance on board during flight.

It advises that there should be more training and support for cabin crew.

I do not think there is a rule written somewhere that gives the cabin crew the right to restrain a passenger, and I do not think there is a training for that to cabin crew (how to restrain a passenger). The rules vary from an airlines to another, from one civil aviation authority to another, but the guide lines will always be the three steps way of dealing with unruly passengers:

Now those were the guidelines, but sometimes these aren't enough and unruly passenger might compromise the safety of the passenger/aircraft. If that's the case and the unruly passenger is way out of control and starts to freak other passengers, then no specific rules will apply! Just common sense! The cabin crew have to act according to common sense in any emergency case, the emergency procedures and policies are to be followed literally in many cases but sometimes common sense has to take over especially when the book does not cover that scenario.

What would you do if you make a party in your house, and one of the guests starts to make problems and break things and harm other guests? you will call the police, kick him out or restrain him. In aircrafts you are only left with the latter, I think that's what lead the cabin crew in that flight to restrain the passenger - common sense.

Legally, if the cabin crew followed the guidelines mentioned above, with the existence of many witnesses, then they are clear! Some people might think this is inappropriate and against human rights and blah blah, but they have saved many passengers and the aircraft from a bigger problem!

One more thing to mention, after 9/11 things are much different, authorities are super sensitive to any kind of unruliness in aviation. Airports security, carry-on luggage rules, customs and passport control. So I think it is normal if the cabin crew got some of this sensitivity. just guessing.

Regarding the methods to restrain unruly passengers, I never heard of an airlines that provide restraining tools for the cabin crew. Icelandair said they do and I am skeptical about this, why would they provide duct tape? If they would provide tools to restrain people then they should provide hand cuffs or tie wraps!

Anyway, in my 10 years as cabin crew, I haven't faced a single case of restraining a passenger by cabin crew. Although I have seen many unruly passenger but the three steps above worked in all the cases.

Some airlines, in certain routes, have sky marshals onboard. They are usually government agents who are positioned in aircrafts undercover, either as passengers or as cabin crew. They are allowed to restrain people and even put hand cuffs on them. As I said they are government officers and they have their rules.

20
Germanwings: Bumped off flight and rebooked for flight on next day. How to make claim?
11
Avoiding crew fatigue on empty leg flights
17
what is the most advanced flight search engine besides Azuon and Matrix?
2
Does the EU have rules about air ticket refunds in case of visa refusal?
40
Passenger rights during a flight
4
Flight canceled due to shortage of crew caused by bad weather
5
EU Air Travel Passenger rights: Right to care: What to expect during delays
7
General question about visas for connecting flights booked via travel agency