How fast is the Internet on board Iceland Air flights?

Iceland Air offers wireless internet connectivity on all flights. How fast is it in practice?

It will depend a lot on how many other passengers are using the service, not only in your aircraft, but also in other aircrafts within the same region. Icelandair is not throttling the speed artificially, so you get what is currently technically feasible, but how much that is will depend on many factors. The technically available bandwidth is rather mediocre compared to fixed broadband services or ground-based cellular or wireless networks.

Across the Atlantic and above Iceland and North America, Icelandair is serviced by Viasat. Above UK, Ireland and the rest of Europe, they are using services from the Eutelsat KA-SAT satellite. I don't know the technical details of the Viasat service, but KA-SAT is covering almost entire Europe with 82 spot-beams, each having an available data rate of 475 Mbit/s. That may sound a lot, but even if the spot-beams vary by size, they are in the range of plus/minus 100,000km². Almost the entire eastern part of Great Britain (east of a line through London, Manchester, Edinburgh) is for example covered by only one spot-beam and all users in this area must share the available 475 Mbit/s. Each connection (between the aircraft and satellite) is limited to 20 Mbit/s. Viasat/Eutelsat is not only serving Icelandair, but also other airlines and at least in Europe, Eutelsat also use the same satellite to provide ground-based internet access in remote locations.

So at least over Europe: If you are the single user in your aircraft and there is not much traffic in the area, you can in theory get up to 20 Mbit/s.

If there are more users of the service, all users in the same aircraft must share 20 MBit/s. E.g. if ten passengers are currently downloading or streaming something, each passenger will only have 2 Mbit/s available.

All users within the same spot-beam must share the available 475 Mbit/s. If you still need e.g. 2 Mbit/s for a specific service, there may also not be more than about 240 users in the same region simultaneously using the service.

Since the size of the spot-beams is defined by geometry and not by traffic or population density (the beams get larger and more elongated the further north you are), you must expect the available bandwith to fluctuate significantly depending on where the aircraft is located.

I must admit that I've never flown Icelandair, but have used or tried to use internet access quite a lot on other airlines in Europe, which use technical solutions with similar parameters. On a good day, it is neither impossible nor unlikely to reach bandwidths as measured by Jonathan Reez (7.5 Mbit/s). More often than not, the network can however also be clogged and annoyingly slow, making it difficult enough to browse simple web pages.

Below is a screenshot from the flight, flying above Europe: 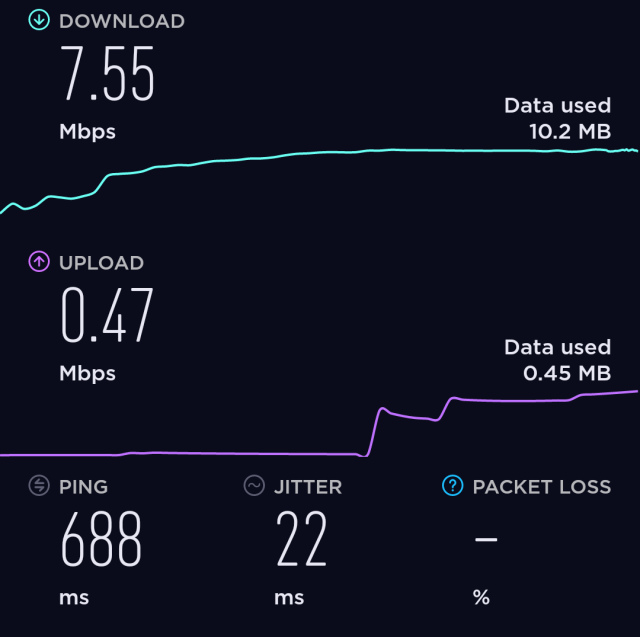 I was even able to make a Telegram call onboard without issues. However... once we've reached the Atlantic the following speeds were observed: 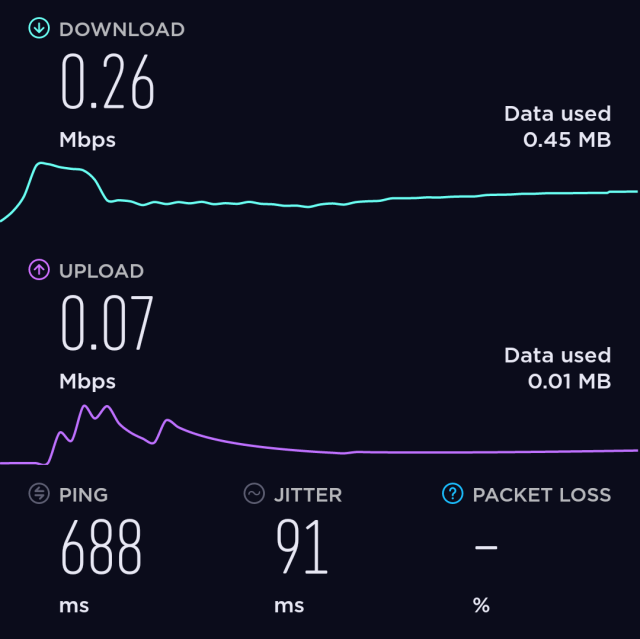 Therefore I wouldn't rely on the Internet to be usable beyond simple messaging when connecting onboard a plane.

Not the answer you're looking for? Browse other questions tagged air-travel internet icelandair or ask your own question.

15
Are there companies that offer worldwide Wi-Fi roaming for a fixed fee?
22
What equipment should I travel with to increase the odds of good internet and phone connectivity?
8
Which trains in the Netherlands have Wifi?
4
Where do I find really fast internet access in Auckland, New Zealand?
3
How fast is mobile internet in Malaysia?
23
Can you use a camera during take off and landing?
5
I have a stopover in Iceland with Iceland Air, do I have to collect and check back in my luggage?
9
How fast is the mobile network (3G) in Myanmar (in February 2016)?
6
Check in for Iceland Air from Aberdeen
17
How fast do the typical domestic travel jets (737, A320 family) actually go?