How much should I tip in restaurants in Germany?

There is already a question about whether tips are mandatory in Germany, but how much should I tip?

In general, tipping is optional in Germany. While not tipping is not the typical case, there are people who don't tip at all. Thus it does not necessarily imply that something bad happened. It is different from the US, where you can expect the manager to ask you what kind of catastrophy the server has caused.

It is hard to give a universal percentage that is always applicable because you usually round up to the next 50 ct for low amounts and to the next euro for higher amounts. You would also probably avoid paying 89€ and round it to 90€.

I "crunched some numbers" and found that 5%-10% is a good approximation of a common tip percentage. Marked in green are values in columns that felt right. There are four important columns based on a 5%, 10%, 15% or "other" tip. 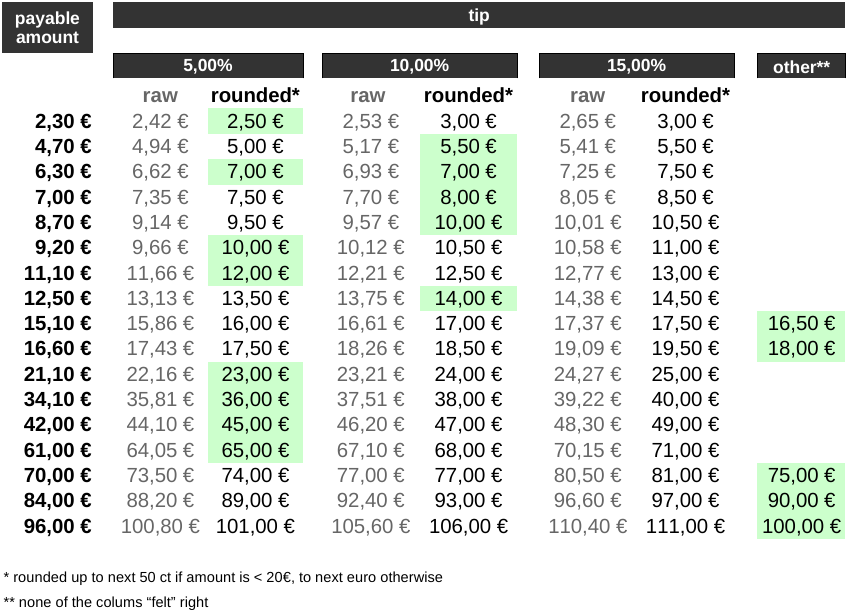 As you can see, sometimes a neat number will be prioritized. Or for 15,10€ you would take 10% and round down a little because it is rounded to 50 ct but is closer to 10%.

Obviously this is a subjective assessment but may be useful to foreigners to get a feel for what is the right amount. I found that e.g. people from the US tip too much. While no server will complain of course, you are "wasting" money and might come across as a show-off.

I have been living in Germany for 27+ years.

Not the answer you're looking for? Browse other questions tagged germany tipping or ask your own question.

58
Is tipping mandatory at Restaurants and Bars in Germany?

9
How much is it appropriate to tip in Palm Beach?
59
How much to tip in the United States?
7
How to tip housekeeping in hotels if leaving tips daily?
9
Should I tip in-room dining in US? How and how much?
16
Do I tip differently in US states where tipped employees receive full minimum wage ($7.25/hr), rather than tipped minimum wage ($2.13/hr)?
2
How to tip a concierge or a hotel porter?
58
Is tipping mandatory at Restaurants and Bars in Germany?
3
How much is customary to tip drivers in Georgia?