UK visitor visa refused: can I still go to university in the UK? [duplicate]

I was refused a UK visitor visa in April. Before that, I had been in and out of the UK twice, and I also schooled in the UK (MSC) and graduated without any dirt to my name. I never had any immigration problems either. I was scheduled to resume a PhD course in September 2017, but had to move it foward to March 2018 due to civil unrest where I live.

Since I was doing nothing at home, my parents decided to sponsor a one week trip back to the UK as I had made plans with my friends already. I went to the UK in October 2017. My parents and I decided I should stay a while longer, as I had a 6-month visa, to look for a house, do some shopping for school and prepare for my PhD program. I left my country with cash, £2000, and had additional money in my bank account. I returned home in January 2018, to discover my dad had a terminal illness, and he asked that I shift my resumption to September 2018, so I could start work in his company and learn the ropes, in case anything happens.

I called my supervisor, and shifted my admission to September 2018, even though I had paid tuition. Three months after I started work, I was to take on my first leave from work. Again my parents agreed to sponsor my trip to the UK, as there were couple of concerts I wanted to attend, and I also wanted to see my friends and to pick some of my stuff that I left in storage.

I was refused a visa, citing the fact that I stayed more than 7 days over my last visit, even though it is not a crime and I was well within my visa. As always, my parents sponsor my trip, this time, he had his accountant transfer money to my account, but they complained that the money did not come directly from my sponsor's account. When it was time to resume in October 2018, my university asked me if I had ever been refused a visa and I said yes. They did some immigration checks and withdrew my PhD offer, without giving a reason.

The university apologised for the withdrawal and promised it does not affect my chances with another university. They are prepared to issue me a refund, but is it pointless applying to school in the UK because of a refusal? Should just apply to another country? I already applied to a couple of schools, but I am scared they won't admit me if they find out I have been refused a visa. I don't know how to defend myself as I have my bank statement showing all of my withdrawals and account credit while I was in the UK. 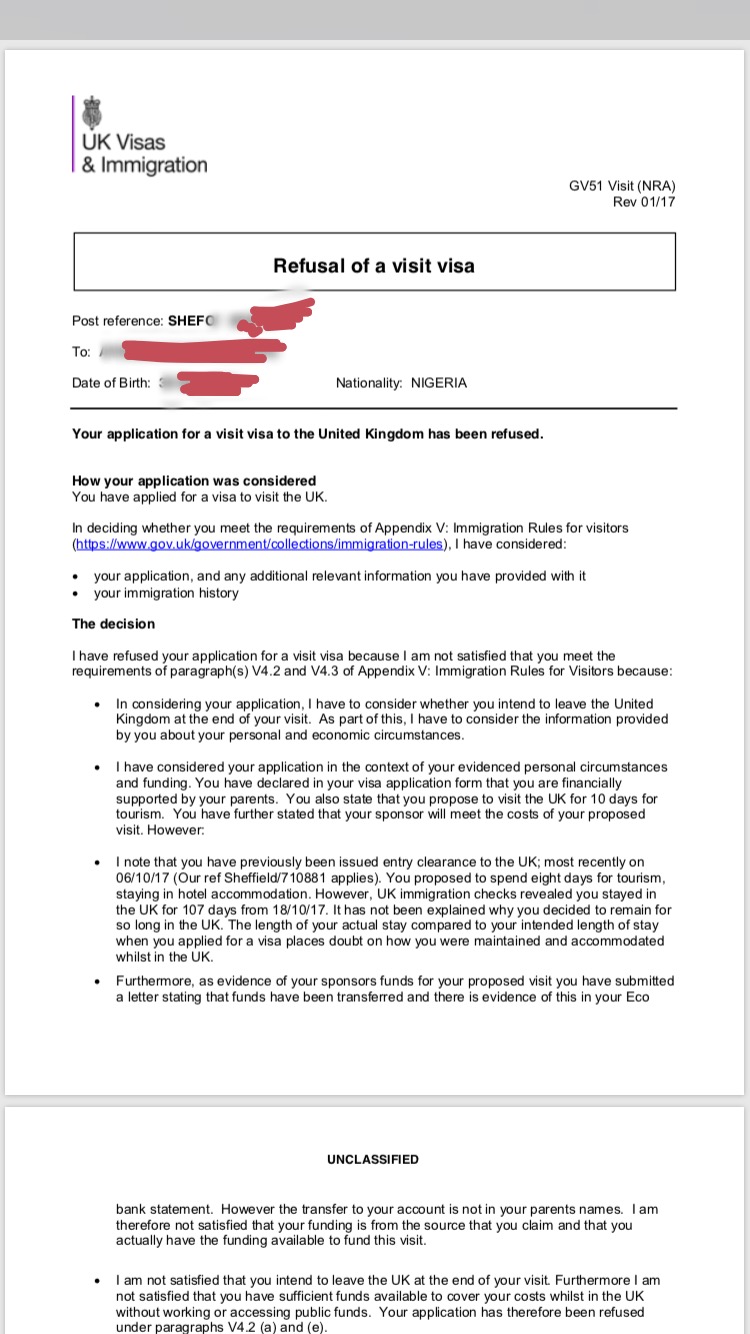 From your refusal letter it seems you entered Britain saying you intended to stay for seven days, but actually stayed over three months. This isn't a crime, but it raises questions about how you supported yourself. The immigration officer hasn't said as much, but he believes that you were probably working illegally.

Further, the source of the additional funds provided by your family wasn't properly documented, so the officer has doubts about the funds you have available to support yourself. Again, he believes you'll probably work illegally.

Your chances of getting another UK visa in the near future are slim to none.

If you are to get another visa at all you will need to prepare a rock-solid application that addresses these points, and for this you'll need the services of a good solicitor who has experience in UK immigration.

If you have options other than the UK for your PhD you might be well advised to take them.