Applying to US Visa-Waiver program with two passports, one of which is expired

I am going to travel to USA in December and as Italian citizen I qualify for the Visa-Waiver program (I also meet the other requirements). The thing is that I am also an Argentinian citizen, but my Argentinian passport expired more than 10 years ago. Note that Argentina does not belong to the list of countries in the Visa-Waiver program. I have a couple of questions:

To enter the US under the VWP, you will need an ESTA.

Have you ever been issued a passport or national identity card for travel by any other country?

So, yes, you should indicate that you have had an Argentinian passport, even though it expired.

If you still have the passport, you can fill in all the relevant fields. If you don't have it, as explained in the relevant help section (accessible by hovering on the circled question mark): 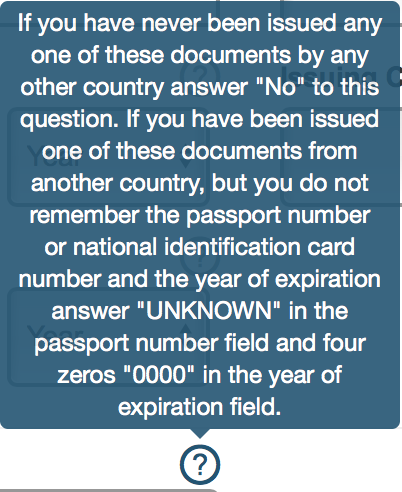 And no, there's no reason they would not allow you in because your other passport has expired or you no longer have it.

Not the answer you're looking for? Browse other questions tagged usa passports esta us-visa-waiver-program dual-nationality or ask your own question.

5
Reentering the US years later with a passport of a different citizenship?