What are the borders of the Ti Tree Fruit Fly Exclusion zone in Australia's Northern Territory?

In Australia, State and territory governments restrict the movement of fruit within the country to control pests. A government website says:

The Ti Tree Fruit Fly Exclusion Zone extends from Tennant Creek to Alice Springs. Do not take fruit (including capsicum, chilli, tomato, eggplant, cucumber, zucchini and squash) into this zone.

Repeated web searches for more information keep returning this exact sentence. A handful of sites point out that all fruit (eg bananas and oranges) are included as well as the "botanical fruit" listed above. What nobody points out is the border of this zone.

If I buy bananas or oranges at an ordinary Alice Springs supermarket (where I assure you, they are for sale), can I take them to Tennant Creek? Will I pass a disposal bin and sign between the two, or is Alice Springs inside the zone, making it ok to continue on with my fruit?

The actual exclusion zone consists of a series of "accredited production places". These places are listed in a Northern Territory Government Gazette notice dated 16 January 2008.

The places are described as individual land holdings and so are not very helpful to travellers. They appear to describe individual farms and vineyards. For example, one of the places, called Limestone Bore, is described as follows:

All that parcel of land in the Deep Well locality in the Northern Territory of Australia containing an area of 100 hectares more or less being Northern Territory Portion 3909 and being more particularly delineated on Survey Plan S90/74A lodged with the Surveyor-General, Darwin.

You can get a map of Survey Plan S90/74A by going to http://www.ntlis.nt.gov.au/hpa-services/surveyplans?planname=S90/74A

Will I pass a disposal bin?

The Northern Territory Plant Quarantine Manual suggests that there are bins available to dispose of plant material:

It is advised that travellers plan their travel arrangements to reach state borders with minimal quarantine risk material. If in doubt about conditions, travellers may also surrender fruit and other plant material into quarantine bins provided at the Darwin, Katherine and Alice Springs Railway Terminals, at Darwin International and Domestic Airport, Katherine Airport, Gove Airport, Alice Springs Airport, and at Kulgera, Aileron and Ti Tree Roadhouses, or dispose of the materials prior to entry into the Northern Territory.

If I buy bananas or oranges at an ordinary Alice Springs supermarket, can I take them to Tennant Creek?

The Plant Health Regulations provide some exemptions for properly packaged fruit passing through (and not being unloaded at) accredited production places. However, you should ask supermarket staff at Alice Springs to make sure.

There's a map of the various quarantine zones on the Australian Interstate Quarantine site. Zoom in to Alice Springs and you'll find that Route 87 north to Tennent's Creek is highlighted, with Ti Tree about halfway along. The highlighted section appears to start just north of Alice Springs, so I imagine that your bananas will be frowned upon going north.

About 90 minutes north of Alice Springs (but after stopping at the height of land, the tropic of Capricorn, and a giant swathe of termite mounds, so perhaps only an hour if you drove at the 130 km/hr limit) we saw this sign (there had been some warnings before that, reminding us to Eat Fruit Now): 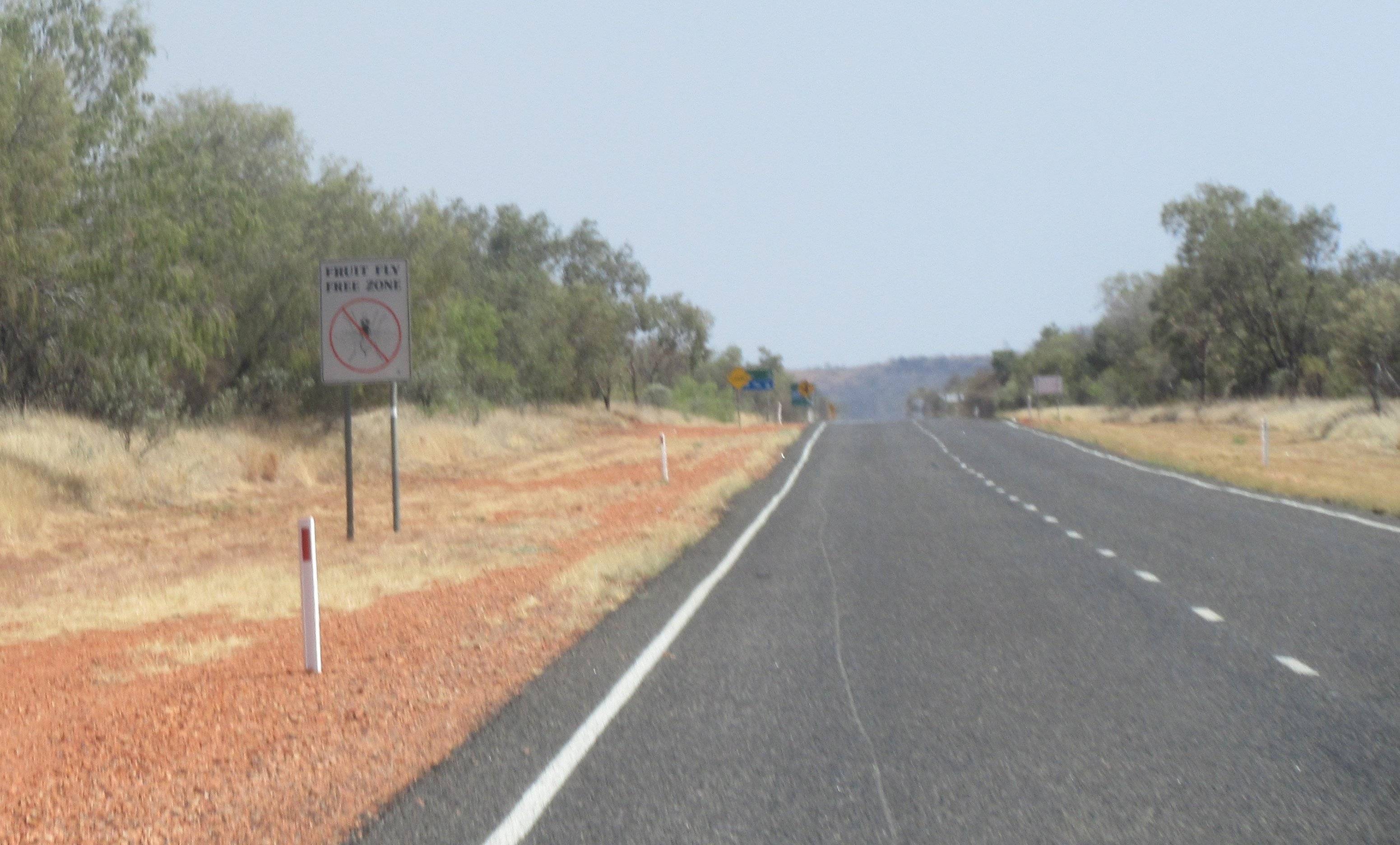 There were no bins, no place even to pull off.

I did not notice where the zone ended.

Not the answer you're looking for? Browse other questions tagged australia food-and-drink northern-territory or ask your own question.

8
What are the cheapest ways to get from East Asia to Australia?
7
What are the prices of coffee in Poland compared to USA
13
What are the typical meals in Japan?
6
What are the limiting times at an Amtrak train to get respective meals?
5
What are the options for a prepaid SIM card in Australia?
9
What are the food specialties of Charleston, South Carolina?
5
Is it safe and practical to visit the Northern Territory?
1
What are my food supply options sailing the Cyclades?
5
What are the places that sell coffee beans called in Turkey?