Is it possible to take a photo of Elizabeth Tower (Big Ben) from an airplane window?

I see sometimes photos of the Elizabeth Tower allegedly taken from an airplane window. Here are just two of them taken from Instagram account loves_bigben. 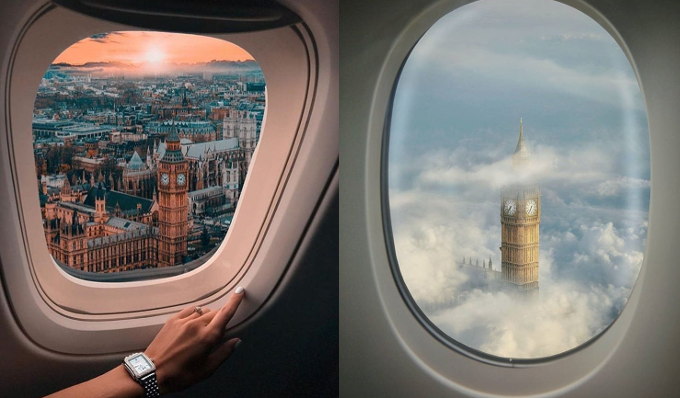 Do passenger airplanes really fly such low heights above the center of London that it is possible to take such photos?

No, airliners do not fly low enough that those can be photos.

On the left-hand one the distance between the top of the tower and the horizon is much less than the height of the tower, meaning that if this is a photograph, it would be taken from a height of about 500 feet.

The right-hand one apparently shows the top of the tower above the horizon, meaning that the vantage point would be even lower.

Flights landing at London City Airport's runway 09 pass quite close to the Palace of Westminster at low altitudes -- see for example AZ216 on Flightradar24 today -- but not that low. That would put them lower than several of the skyscrapers in the City which they need to pass over to get to the runway.

More generally, the Palace of Westminster is in Restricted Area R157 where flights below 1400 feet without special advance permission are forbidden.

Both images look like digital artwork rather than photos to me.

Here is a real photo taken on 21st September from a plane coming in to land at Heathrow airport. Planes on final approach to Heathrow often fly down the south side of the Thames so if you have a window seat on the right of the plane you often get a very good view. However, not as close as in your images at the top! I doubt it is easy to get any closer. 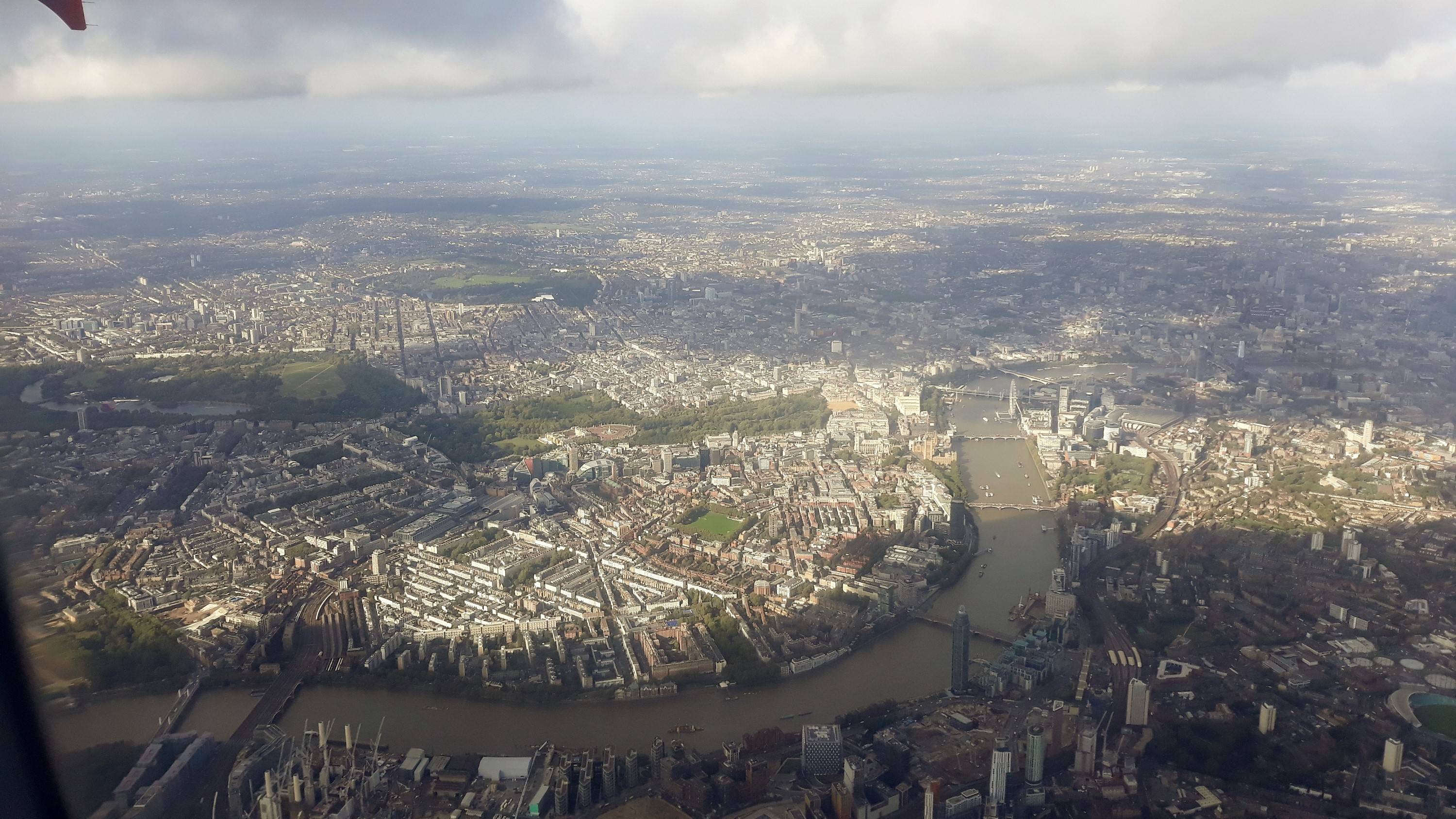 As Henning's answer makes clear, the images in the question are composites and passenger planes don't fly that low over central London. Also, the clouds in the second image are obviously fake: they're clearly large clouds but being below the roof-line of the Palace of Westminster means they'd have to be between ground level and about 100ft (30m) altitude.

However, passenger planes do fly quite low over London. Typically, the wind in the UK is from the west, and planes land into the wind where possible. Since Heathrow is to the west of London, this means that, in typical weather conditions, commercial flights coming into Heathrow do pass over central London at low enough altitudes to give very good views of the major landmarks. It is possible to get nice photos of London from commercial flights; but not that nice. Also, the weather in London is often cloudy so you may well fly over central London and see nothing.

If I remember, I'll edit this to give an indication of the altitude they fly over London but, as luck would have it, planes are landing from the west at Heathrow today, so they're not coming in over London.

I have in fact seen Big Ben while flying into London Heathrow once or twice, but always from far further away than these photos. Far enough that I had to search a bit to find landmarks.

The photos are certainly manipulated for artistic effect and the originals are likely either from the London Eye (a large enclosed Ferris wheel) or from a helicopter touring the city.

This is from an approach to LCY - afraid it's not Big Ben but Tower Bridge, as we were approaching from the east rather than the the west (depends on the wind direction), but this may give you an idea how low flights come in over central London.

For me, it's lower than I would have thought, but still not low enough to take the photos in question. 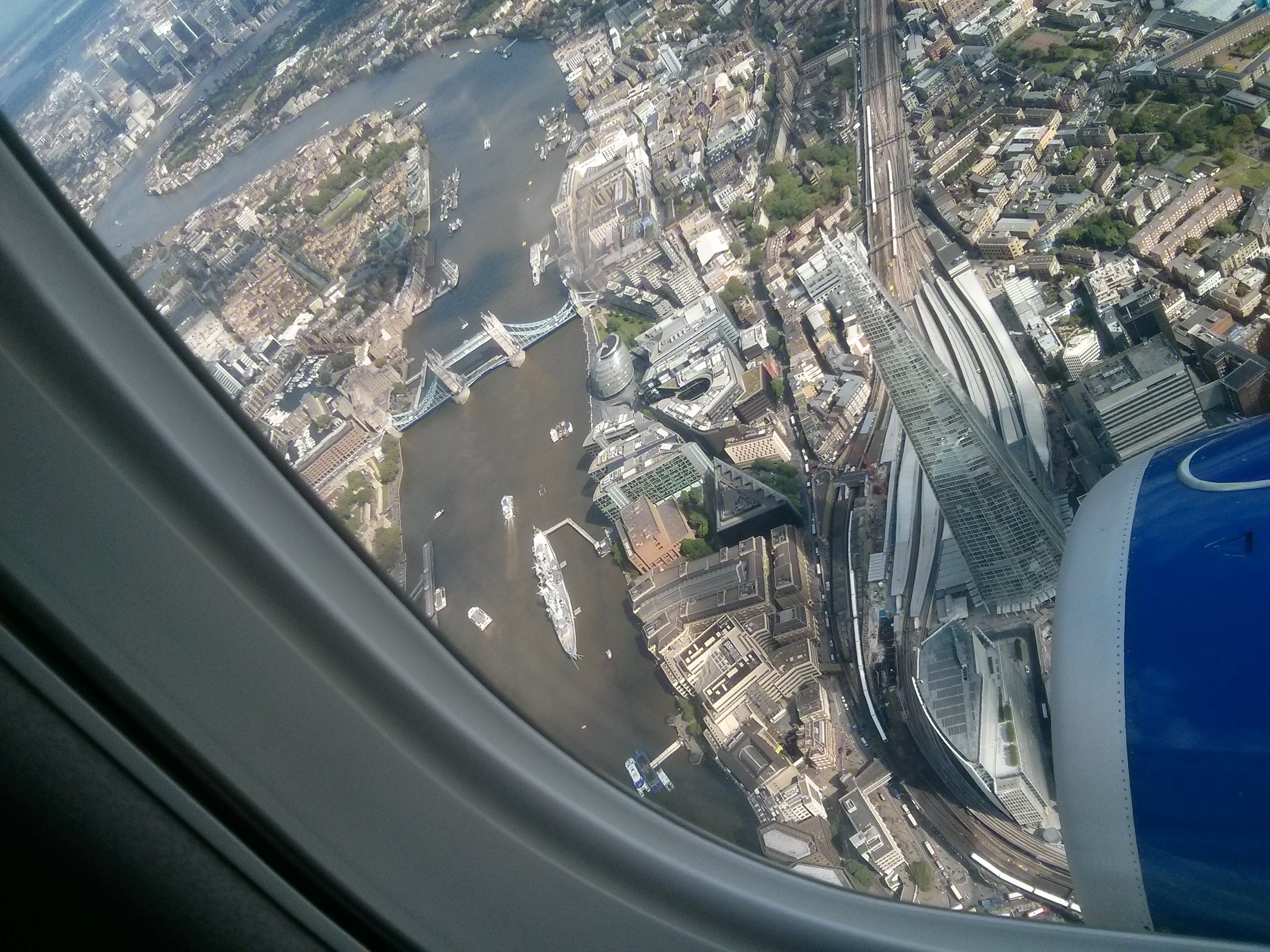 There is something wrong with the lighting in the first picture (well, several somethings):

EDIT: The first picture (at least) is not taken from an airplane window.

It would definitely have been possible to take a clear photo of Big Ben (and a number of other well-known landmarks too) when I returned on a flight from Riyadh a decade or so ago. I remember agreeing with fellow passengers that the overall vista was something like a tea towel (drying cloth) showing the London sights. Also, seeing planes stacked up above North East London, making descents to Heathrow in the South West, was commonplace when I lived in North London. Planes do fly over central London and you can see the landmarks below if the aircraft banks towards your side of the cabin.

Not the answer you're looking for? Browse other questions tagged london photography or ask your own question.

4
How can I meet people while traveling in the UK
13
Is there a resource about panoramic views at take-off/landing?
7
Is it possible to see Sydney Tower from Norah Head?
1
How accurate are the route annotations for alternative fares in TfL's Single Fare Finder?
8
Is Big Ben visible from the British museum?