The RailTeam alliance of European rail operators offers a HOTNAT ("hop on the next available train") guarantee, stated as follows:

Hop on the next available train » (HOTNAT) allows travelers to take the next high-speed service leaving from the same station as originally planned when a delay on or cancellation of a preceding Railteam member’s high-speed service prevents them from making their originally-planned connection. This service is free of charge and is subject to the following conditions : the connection that was missed must be between two high-speed trains of the Railteam Alliance. HOTNAT only applies at the station at which the passenger originally planned to change trains and in cases of train delays and train cancellations. The approval of HOTNAT is subject to the available capacity on board each train. Seats are not guaranteed.

I'm particularly interested in the applicability of this guarantee to the Brussels <-> Cologne route, where the next train is generally a Thalys if you miss your Deutsche Bahn connection. Since both DB and Thalys are RailTeam members, it seems that I should in such a case be able to take the Thalys with my DB ticket, provided that they're not completely full. (Apparently even when all seats are booked, passengers may be accommodated on fold-out seats or in the bar.) However, I've read occasional claims online that HOTNAT may not be honoured in practice -- most recently here: 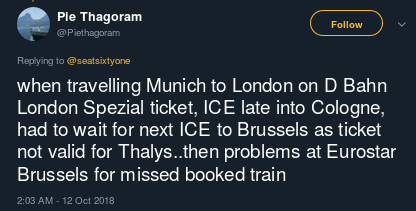 Things may be complicated by the rules changing over time, and by some rail staff being unaware of current rules. So, if this does happen to me and I simply walk onto a Thalys train with my original DB ticket and a stamp proving the delay, do I risk being forced to buy a walk-on fare? Are the Thalys staff sometimes unaware of the HOTNAT provisions (in which case it might help to carry a print-out of the web page), or am I misreading the HOTNAT rule?

There is a special stamp to prove you're entitled to hop on the next available train: 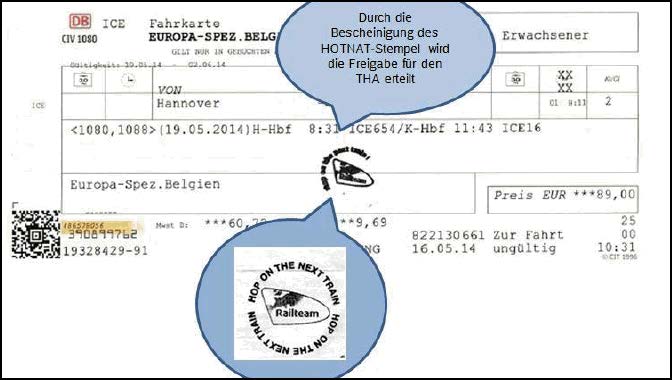 The text in the upper bubble roughly means, 'The HOTNAT stamp indicates approval for using THA'. The image is taken from page 9 of this document:

Ideally, if there is enough time, you'd go to a DB ticket counter in Köln Hbf and get this stamp, which validates your ticket for Thalys.

I can only guess that a regular DB stamp might not be generally recognized by other train operators, hence this special Railteam stamp.

Are the Thalys staff sometimes unaware of the HOTNAT provisions (...) ?

Considering the negative examples you found, it's probably fair to say that we're likely to make bad experiences public in the hope of some improvement, while we see little reason to talk about the ordinary, that is, when things went smoothly.

I discovered the wonderful HOTNAT in July when my Eurostar train to Paris was delayed just outside St Pancras, and it was clear I would not then get across Paris in time to catch my booked TGV to Libourne. I found the train manager on the Eurostar to ask his advice, and he immediately wrote out the HOTNAT document for me and stamped both my Eurostar ticket and the one from Paris to Libourne. In Paris I could take a relaxed metro without worry, and at the right mainline station, I was waved through the ticket barrier and given a free upgrade to the first class disabled seat (I am not disabled but am so-called elderly) which gave me space and a big table. The train went very fast to Bordeaux, where I changed to Libourne without discussion. I arrived only a short time after the original direct one to Libourne that I was booked on, and as it was over 40 degrees outside and the air conditioning all worked well, I was very happy indeed with the service. I suggest however that the key part was getting it sorted out while on the delayed train - hunting down the manager took a bit of time - so I had no concerns about anything that might happen after I got to Paris, and did not have to queue and try and prove a story while in Paris.

Not the answer you're looking for? Browse other questions tagged trains europe delays deutsche-bahn thalys or ask your own question.

4
Can I credit travel on one RailTeam member to the frequent traveller program of another?
10
Are intercity trains in Sri Lanka generally on time?
3
Guarantee connecting flights in custom itinerary?
7
Buying a rail pass from a non EU country and reserving seats in advance
11
Should I book my train connections in advance in China?
3
During Thameslink disruptions, are there any pre-prepared maps for alternate routes?
16
Missed night ferry on Rail & Sail connection due to delayed trains, what are our rights w.r.t. delay repay and accommodation costs?
5
Compensation by negligent rebooking of an airline (Europe)
22
What does the "Kiwi.com Guarantee" cover?
6
Is it possible to book adjacent seats on a NightJet train?