Crossing the road in London - Did I have 'right of way'?

I was crossing this road in London, going from the left pedestrian path to the island just like the person in the picture. There were 'look left' 'look right' signs written on the road. There were no pedestrian lights at this crossing so I assumed I had right of way and I crossed the road just as two cars were coming towards me. Both stopped but one honked loudly which startled me because I thought I had right of way. Was I in the wrong and in the future how should I cross this type of crossing?

Edit: the one that honked may have seen me much later than the other car because it was closer to the island

Rule 195 of the highway code states:

However, you were not at a zebra crossing. These are marked by stripes on the road and beacons on the pavement. 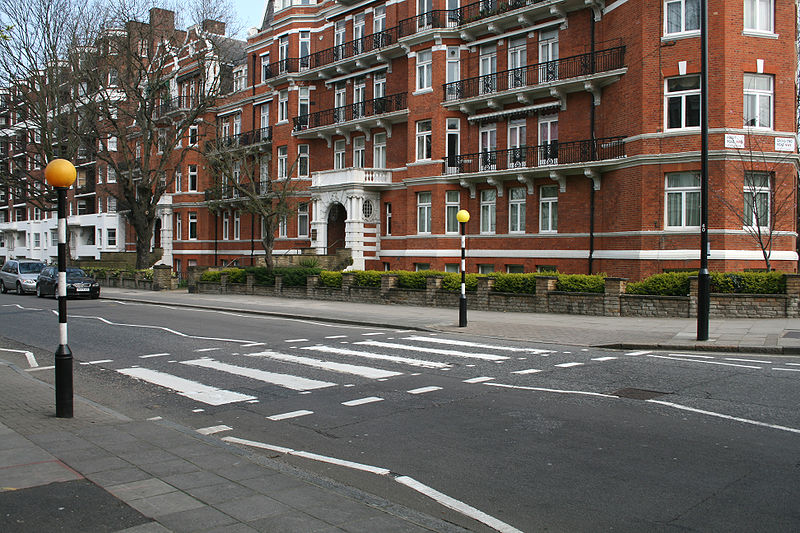 You would also have right of way at a pelican crossing if you had a green light, but it sounds like this wasn't the case. Also, the lights in your image don't seem to show a pedestrian button, so at no point in this intersection would pedestrians have had the right of way. The look left/right markings on the road where likely a reminder when looking for traffic and not a right of way indicator.

That said, many social norms in Britain are often far more nuanced in reality then the law often makes it seem. It's hard to explain but there are plenty more unwritten rules as well. For example, I would expect any car to wave you across even if they have the right of way if they cannot clear the junction due to traffic opposite, but to the best of my knowledge there is no hard rule.

Incidentally, when being run over, the self-satisfied knowledge of being 'in the right' is rarely much comfort.

No, because of Rule 30 in the highway code for un-signalled crossings. This then refers you to Rule 7, The Green Cross Code. The part of this that applies here is part D,

D If traffic is coming, let it pass. Look all around again and listen. Do not cross until there is a safe gap in the traffic and you are certain that there is plenty of time. Remember, even if traffic is a long way off, it may be approaching very quickly.

A car would have to give way, if said car was already stopped, and a their light changed to green as you were in the action of crossing.

Edit: Whilst OP seems to be in the wrong here, as soon as they, a pedestrian, take a step onto the road, the driver of a vehicle is obliged to avoid a collision. In this sense, they "Give way" to the pedestrian/cyclist/sheep herds?

As per rule 152 of the highway code, you should be driving at a reasonable speed in built up areas, specifically for these kinds of occurrences.

On a pedestrian crossing, pedestrians have the right of way when the light is green or there is no light at all.

In the absence of a pedestrian crossing, pedestrians usually do not have the right of way.

It seems unusual to me that there are no pedestrian lights here (perhaps it's because there's so little space on between roads on the side not shown in your image). Nevertheless, this is a major road (you can see on the google maps screenshot that it's labelled as an A-road, although this classification isn't often clearly visible in real life) and you absolutely do not have right of way there as a pedestrian.

The best way to cross here would be to use the pedestrian crossing visible just past the junction, but if you insist on crossing at that location you should do so in the same way you would cross a road anywhere else that doesn't have a pedestrian crossing. Wait at the side of the road until either:

As a UK pedestrian and driver, I would add the driver's perspective and norms, to the excellent description of the Highway Code in other answers.

In general, drivers would not be required to stop for a pedestrian other than

Also in general, all road users should act in ways that reduce the chances of accidents. So both drivers and pedestrians should be watchful, and they should not act in ways that force other road-users to take abrupt or emergency avoidance actions to prevent an accident (such as abruptly running into oncoming traffic, or crossing a junction/overtaking where other traffic will have to brake sharply).

Beyond that minimum standard, the social expectation is that pedestrians are expected to be responsible too - they can cross as they like, but should do so in a way that other road users don't have to take emergency avoiding action, and avoid creating a significant risk of an accident. So they should cross where it's more visible, check for traffic, make sure they act in a way that traffic can see and anticipate their intention and actions, and so on.

Within those expectations, a pedestrian can pretty much cross any road anywhere (except a motorway which should be pedestrian-free).

The only other social expectation is that some drivers, and some pedestrians, will be courteous and indicate that the other should go ahead.

But "waving someone on" is a social courtesy only, and the other person (driver or pedestrian) should still check it's safe before doing so, in case there are other pedestrians or oncoming drivers who have not seen them, and an accident would be caused. Therefore as a rule, drivers often do not indicate to pedestrians to cross, in situations where another car driving in a different lane might not see the pedestrian walking out in front of the first car, and hit them. That risk is lower if there is only one lane, however, so in that situation it's more common.

Other answers have covered the legalities & social niceties of crossing in London, so I shan't go back over that ground, but for anyone crossing at lights with no pedestrian signals [green man/red man] then this one is your life-saving clue... the circled light below.
It may seem counter-intuitive to rely on looking away from the oncoming traffic, but that light way over there is a mirror of the ones you can't see [because they are hooded so only the oncoming traffic can see their own light], right where you want to cross.

That one tells you the traffic in the lane where the person is crossing must stop anyway - which whilst it doesn't give the pedestrian 'right of way' does mean that no-one is going to drive through on that lane at that time.

But - check the van opposite... Within seconds of your 'safe light' he will get his green & be away, so you have no "cross in one go" strategy at this type of junction. You have to wait until that t-junction stops releasing traffic; which may happen before the lights change again, but may not.
If you set off across the 2nd segment once that is clear, keep your eye on the circled light, because that will go green & let both lanes loose, behind you & in front.
..but that's your gap. Use it wisely.

It's a subtle point, but most laws in most countries do not explicitly grant the right-of-way in any absolute sense to anyone. Instead, the laws are written such that under specific conditions, one party must yield the right-of-way to another party. If they fail to do so, the first party is breaking the law.

So you can't walk around a city as a pedestrian assuming that everything you do is automatically OK. There are laws that apply to pedestrians, too, such as crossing traffic only at marked crossings. But marked crossing or not, if you step out into traffic without allowing sufficient space ahead of oncoming traffic, you can expect to get honked at (or hit, if they can't avoid you). In that case, you're the one at fault, not them.

As a London resident, although unfamiliar with this particular crossing, I see crossings like this all the time.

There are some very good and informative answers here already so I just want to add my short answer.

When crossing the street anywhere in the UK (especially big cities), unless you see horizontal stripes on the road (zebra crossings) it is best practice to wait for the traffic lights to turn red.

Not all crossings will have a button for pedestrians so, unless there is no traffic, just play it safe and wait.

As already pointed out though, in this particular case, it would have been best to just walk a little further down the street to use the pedestrian crossing there.

In addition to all other rules: 1. You are not allowed to cause damage to anyone if you can avoid it, even if you have the right of way. 2. Metal is harder than flesh and bone.

But absence of a traffic light most definitely doesn’t give you the right of way in the U.K. A good method in towns is to follow other pedestrians (but not tourists), and a good method everywhere is to cross only when you can see the traffic, and if there is no traffic, or if they look like they are stopping for you. Including zebra crossings, you have the right of way but that doesn’t help if a driver doesn’t stop.

In the UK, the roads (in general) are for use by anyone. 'Anyone', in a way includes animals. The primary concept for our roads is 'first come first served' although this is varied by various features. So, in the O.P.'s case, he was on the road first so yes he had 'right of way' or more accurately, all others cannot intimidate him if he is in their way. It makes not a scrap of difference if 'he' is the driver in front, the pedestrian in front or the animal in front. It also does not matter if the person delayed has a green light in their favour. Green lights do nothing but clarify the lights at that point do not require you to stop your vehicle.

16
Which buses from London to Continental Europe take the ferry?
27
How did the Dublin airport immigration agent know that I was refused entry to the UK after visually inspecting my passport?
29
How should a pedestrian walk across a busy road in the USA?
5
A little problem in European traffic rules: Priority of a car sitting on a "stepstone" island