While driving in Europe, can I move into and share a lane next to a motorcycle? [closed]

I know most places in Europe allow (and sometimes even encourage) motorcycles to lane split and travel between cars. How do other drivers tell whether a motorcycle is currently occupying a lane as a car would, or is between lanes?

A hastily drawn diagram to illustrate. Can the red car in lane C move into lane B on the assumption that the yellow motorcycle in lane B is between lanes A and B? If not, would that change if the red car was a motorcycle instead? 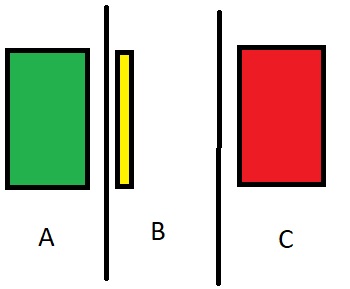 Ideally I'm looking for an actual traffic law citation regarding this from at least one major European country, but anything helps.

No, you are neither legally allowed in most countries to share a lane with a car (some exceptions exist) nor do motorcycles in general tolerate cars well coming into their lane.

I drive myself motorcycle since almost 20 years. Most EU countries do not allow a motorcycle sharing a lane with a car (one exception e.g. Netherlands), what you observe are mostly impatient motorcycle drivers who take the risk weaving between two lanes to get faster forward. In fact this strategy is very common if a green light has only a short time and a queue is building...which gets longer and longer. This can also be observed on autobahns when the traffic is jammed and the cars are motionless or driving extremely slow.

While strictly in many countries illegal, this kind of driving (if careful) is tolerated by most car drivers (and the police often also look the other way) because you allow the car behind to skip your position. Also you are always the vulnerable person on the motorcycle; if something happens, you are likely to be (heavily) injured or killed. For this reason, it is always the motorcycle, not the car who is maneuvering in a lane.

Now motorcycles are often driving in convoy; during this the motorcycles are driving with two in a lane in a zig-zag pattern which gives optimal distance and close into two columns when the convoy comes to a stop.

Don't move close to a motorcycle with a car, this is a surefire way to aggravate the driver. You simply have no crush zone as motorcycle driver and the mass advantage means that even a slow collision can break or squash legs.

Not the answer you're looking for? Browse other questions tagged europe driving or ask your own question.

6
Where in Europe can I find an aircraft turned into a hotel?
3
Can I use my UK Provisional Driving License as ID in Europe?
42
Where is the Asia-Europe divide and where can we cross it?
4
Where can I drive motorcycles in Europe with the Chinese driving license (C1)?
1
Renting a car in europe while living on a working visa in the US and having a European drivers license
18
How to protect one's lungs while driving a motorcycle through heavily polluted cities?
5
Can I apply for a new Schengen visa while in Europe?
1
Issues driving US registered vehicle through Europe into Turkey?