Is flying 60 short flights per year harmful to health due to additional radiation? [duplicate]

For the fifth year in a row I flew approximately 60 times. Most of my flights are within Europe, so an average flight is quite short (~1000 km, ~2 hours). I am concerned about negative health effects caused by cosmic ray radiation.

The calculator on the Federal Aviation Administration website suggests that I receive ~7-9 µSv per 2 hour flight. This means adding additional ~0.5 mSv to my annual radiation dose. Background radiation in my area of 1 mSv/year and a few medical x-rays can easily add up to 3-4 mSv annual dose.

According to BSS/EU, the safe yearly radiation exposure for the general public is 1 mSv.

An example of one of my flights: 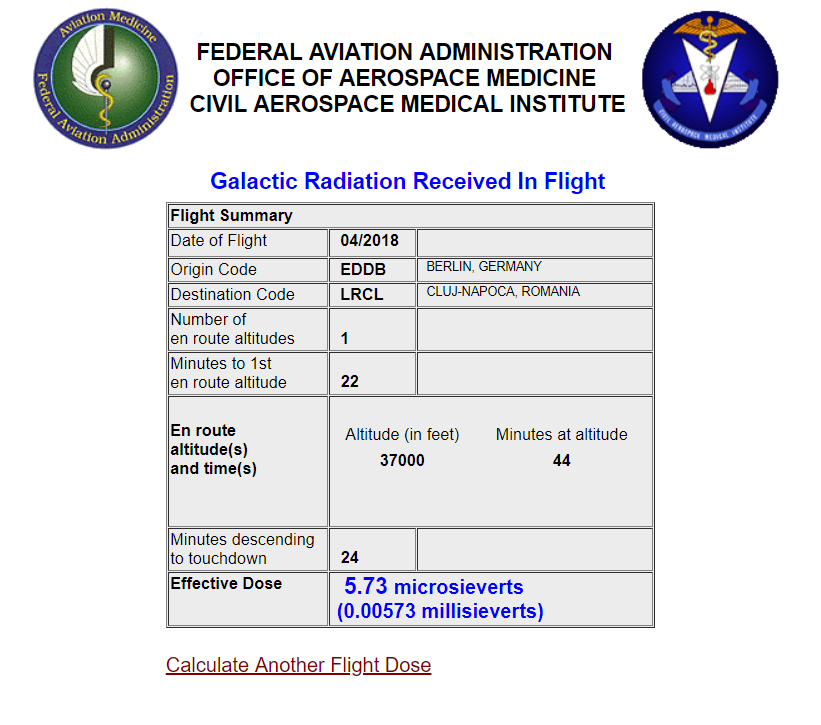 Minimize radiation where you can. Where you can't, then accept the risk and live with it. Ultimately birth leads to death.

Follow-Up: The US Environmental Protection Agency uses the linear no-threshold model. While quoting this isn't scientific proof, I think it is prudent to avoid any unnecessary radiation exposure.

It is also sane to put this risk into perspective -- eating chips and charred burgers increases cancer risks as well, and so does jogging next to a busy street.

Your calculations are reasonable, but I am not sure if you understand or just misquote the EU Basic Safety Standards directive.

I assume that you are referring to article 12 of the directive: "Dose limits for public exposure". This article limits the amount of artificial radiation, which you as a member of the public can additionaly be exposed to by 'authorised practices' in your surroundings to an equivalent effective dose of 1 mSv per year. I can't find any numbers for Europe, but US residents are for example on average in total exposed to an equivalent of 6 mSv per year, most of which actually come from medical examinations.

For special groups, the limits in the BSS directive are set much higher:

As you can see, your additional 0.5 mSv per year from flying is just a fraction of the legal limitation to radiation exposure.

Crewmembers follow a complicated system that regulate rest periods between flights and flying hours per month and many other things. This does not apply to passengers, they are not exposed as much as crewmembers and they don't do 4 or 5 flights a day as some crewmembers do. These regulations are well studied and are based on medical studies and a lot of organizations are involved in it to make sure it's safe for crewmembers. Considering that crewmembers do fly way more than passengers, then it's quite safe to assume that it's safe to fly 60 flights a year.

In my opinion, the only thing you really need to worry about is staying hydrated and moving from time to time to avoid blood clots in your legs.

Even if you always fly business class and only have carry-on luggage, at 60 flights per year you're likely to encounter flight delays and cancellations, flights leaving at inconvenient times, traffic jams on the way to the airport, etc, etc. Not to mention flying every single week leaves you less time for proper exercise and encourages eating unhealthy airport/airline food. All of these factors are likely to factor into your life expectancy a lot more than radiation alone.

In short, no, you shouldn't be concerned.

The radiation dose is very tolerable, and with sufficient pause in between (at 60 flights per year you have on the average 6 days, which is plenty) it's neglegible.

Sure, you may get cancer (nobody can guarantee you won't!), but if you do, you can't blame your travels for it. In all likelihood you would have gotten it anyway, and nobody will be able to tell why. May as well be from the water you drank or cancerogens in your food, or certain virus, or just... bad luck.

Radiation is a naturally occurring phenomenon, and the dose you worry about is way less than what flight crew tolerates easily and without any health issues. The unavoidable constant background radiation, while significantly lower, is probably just as harmful as the intermittent slightly higher exposure. Living in a concrete building is much more harmful (and no one worries about that, me included!), as the higher-than-average radiation is permanently present, not intermittent.

Even at the much higher doses that flight crew is exposed to (dozens of times more, over decades) your body is perfectly able to repair the damage, provided that there are rest periods in between (at least a day). Nature (or evolution, call it what you will) has -- within limits -- adapted to, and can cope with radiation and its damaging effects. DNA repair is a fundamentally important part of life. You couldn't ever go out in the sun, if it didn't work (at least, for the most part) reliably.

In radiotherapy, you get two-digit Grays over a couple of weeks (which, depending on tissue, corresponds to single-digit, double-digit, or triple-digit Sieverts). Not milli, not micro. So basically around ten million times the dose you worry about.
While such a huge dose doesn't truly go down "no effect" on surrounding tissue, even at these massively harmful doses the effects are surprisingly mild provided that there's sufficient rest periods between exposures. This is the entire point of radiotherapy. Healthy tissue will regenerate damage during the rest period whereas tumor won't.

You have to remember that you get radiation even at sea level, and there's no way to escape that. Even from eating bananas. From Wikipedia, you can see that a flight only increases the radiation by 10 times, while you are in the air, so a 1 hour flight once a week (168 hr) increases your radiation by 10/168 = 6%!

Note also that the extremely conservative DOE annual limit is 20 mSv ~ 4000 flights. So no, I would worry more about getting shot out the air or getting lost in the Bermuda triangle.

Not the answer you're looking for? Browse other questions tagged air-travel safety health or ask your own question.