UK visa ban based on an allegedly non-genuine Dutch permit

New Edit/information: I am attaching a picture of the original refusal letter. Personally it makes no sense to me as to why they would think it's a fake permit, especially since she personally went to a police station and got it right then and there. Currently we are trying to find someone in a Dutch embassy or elsewhere to obtain an official letter stating the permit is real. As you can see in the original letter they believe the permit is for a male and of a different nationality... Also, I believe I forgot to mention this but she is Iranian with an Iranian passport.

Side Note: I have blacked out certain parts such as her name, company/employer name, and monthly salary. But just to clarify her salary is equal to over 2,000 British Pounds. Her reason for wanting to travel to the UK was just to travel as she does that a lot and has been to a lot of places. I mean her passports are filled with stamps from all over.

My friend recently applied for a UK visa but she got rejected and banned because they claim there is a non-geniune dutch permit in her old passport. This permit is a piece of paper which she got when she went to Amsterdam in 2011. She went to Amsterdam with a schengen visa and was told she had to check in at a police station, which she did and they put the paper in her passport. She was also told to check in with a dutch embassy outside of the netherlands after she left the country, which she also did and they stamped her passport at the embassy.

They refused the visa again and gave her a 10 year ban based on them claiming it's a non-geniune permit.

I'm curious if anyone else has had a similar issue with the uk visa application and if they have any advice on how to follow up and rectify the issue. I will try and attach copies of the rejection letter and the dutch permit in question.

I should also note that she knows other people who had to do the same process when going to the netherlands. As in she wasn't the only one with that permit in her passport.

Thank you in advance. 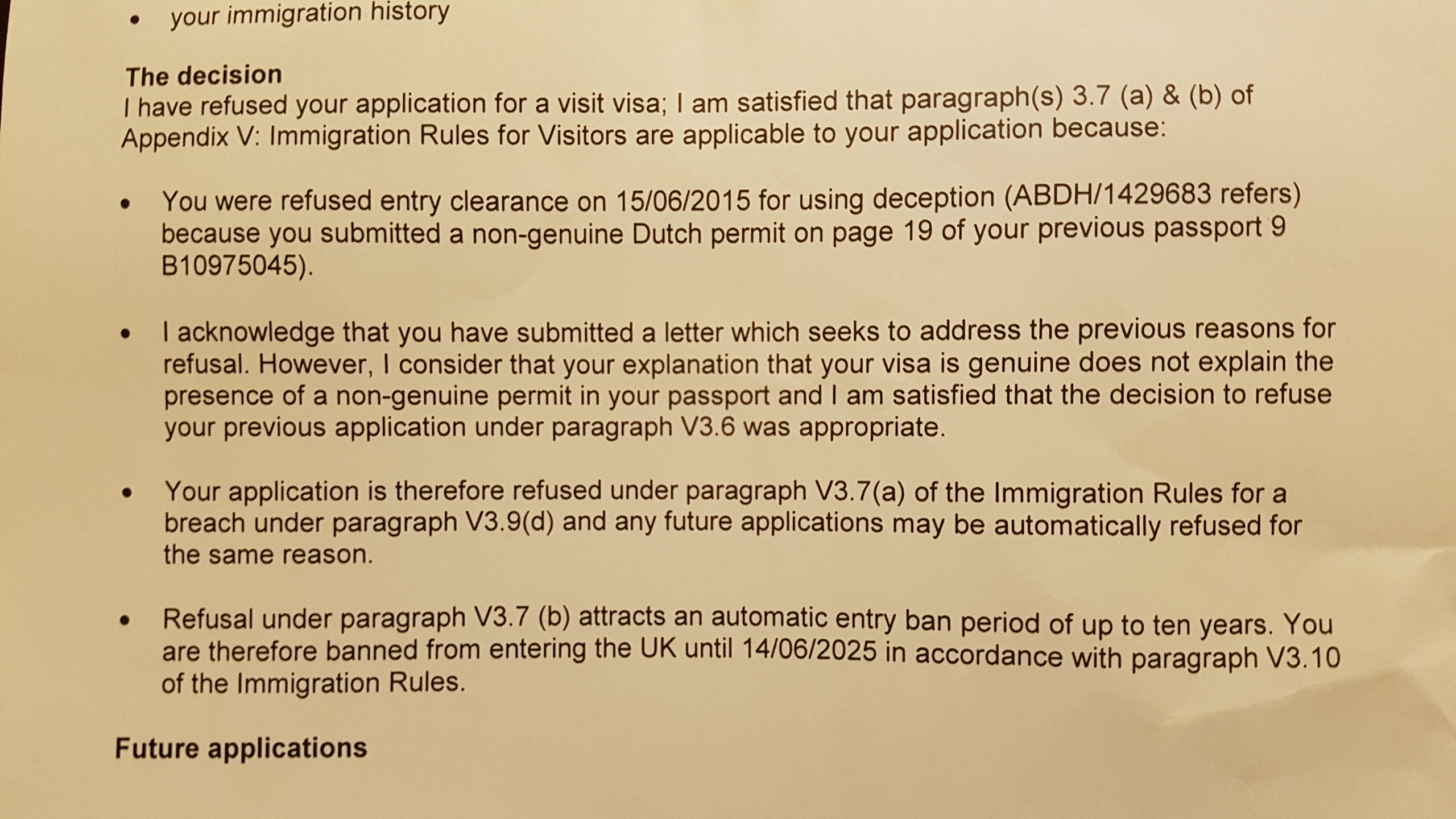 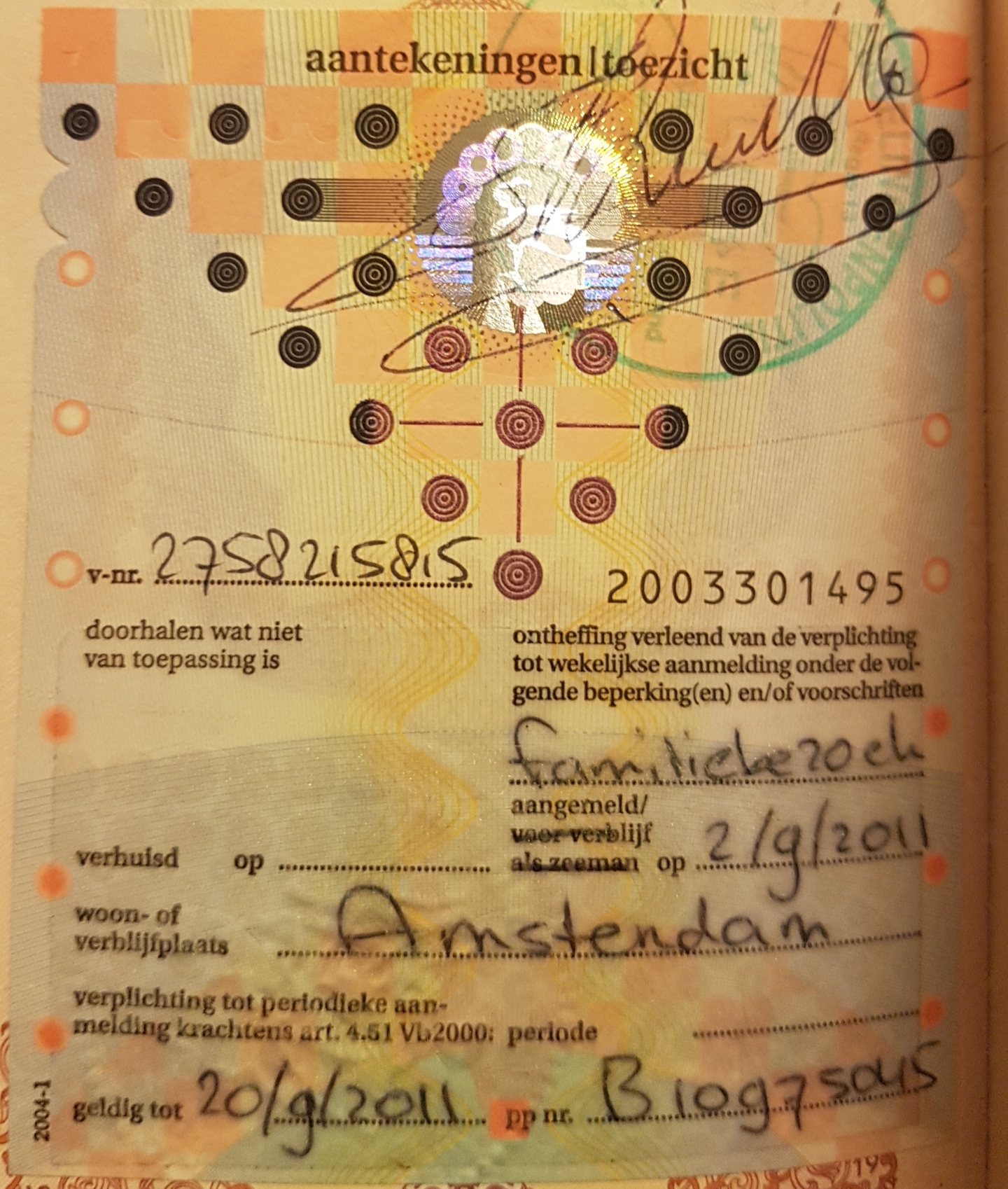 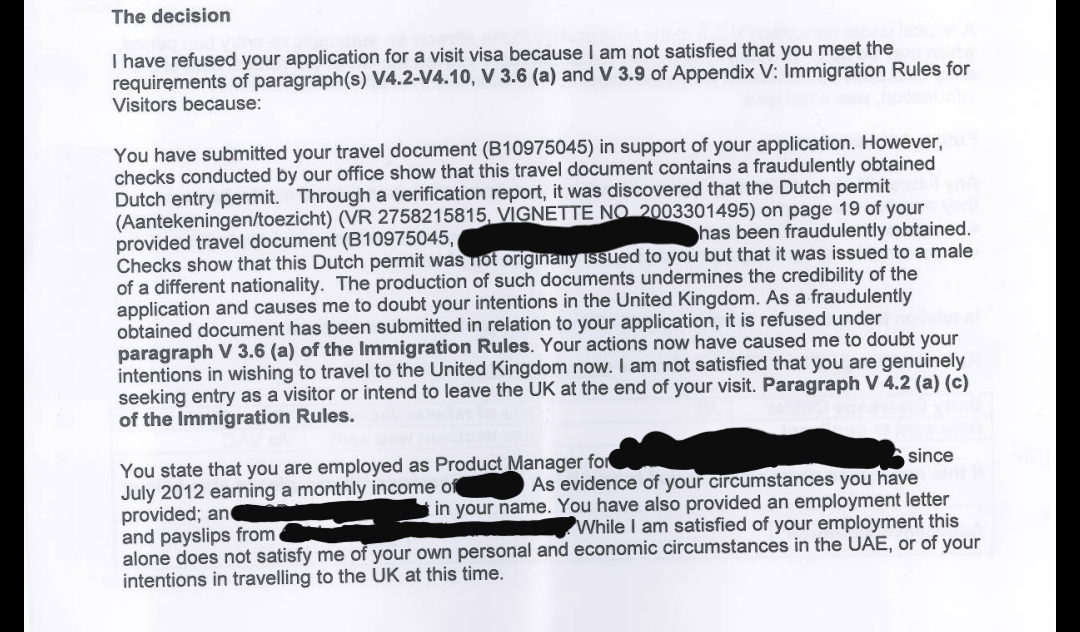 Your passport contained a Dutch permit that the UK authorities believe to have been issued to another person.

Firstly, you should consult with a competent immigration lawyer based in the UK. You should make efforts to obtain a Document Verification Report from the UKVI which would look something like this DVR Sample. This would contain the checks performed by the UKVI which led them to their conclusions. If you think this has been an innocent mistake by the Dutch Alien police, you will need some sort of documentary evidence to shift the burden of proof back on the UKVI.

Second, if the permit is indeed false (that means there was dishonesty involved), according to the Courts, the application would still fall to be refused under 3.6(a) because it is not necessary that the deception has been used by the applicant or that he/she is aware of that deception. In this case, you will need to make a new application (the second one) and show that the applicant was unaware that the permit was non-genuine. Refusals under 3.6(b) require knowledge of the applicant to the dishonesty. Your friend will need have to provide some evidence to show she did not know this was a false document to shift the burden of proof back on the UKVI.

To sum it up, if it there was an honest mix up, there should be no refusal. If there was deception by the Dutch police (or anyone other than the applicant), the first application would be refused under 3.6(a) but not the second under 3.6(b). If your friend was aware of the deception, the ban will not be overturned.

This is a complicated matter and would be better handled by a competent immigration attorney.

Get a competent immigration attorney. There is little point soliciting opinions on such a delicate and complex matter online from nameless faceless people of varying and/or questionable competence.

Alternatively you can try to save yourself a pretty penny by complaining using the email complaints@homeoffice.gsi.gov.uk which can be found on the UK Visas and Immigration Complaints Procedure webpage.

Apparently they take complaints seriously because about one month or so ago I lodged a complaint with UK Border Force and it was handled very professionally and promptly and in my favor. My case however was not as serious as yours hence the recommendation to use an immigration solicitor.

4
UK tourism visa refused twice - if refused again should my friend appeal?
7
US wife visiting me in the UK - what to tell the immigration officer?
9
Re-interviewed for Schengen visa but got rejected for other reasons
2
Applying for UK visitor visa after 3 refusals. Does this case fall under complicated category requiring a lawyer?
12
Bigamy/Deception UK Spouse Visa
0
My cousin's UK VISA for PLAB2 was refused while mine was accepted, with similar circumstances
1
UK transit visa needed when having EEA family permit but travelling without spouse?
0
UK visit visa refusal with 10 year ban: effect on Canadian visa application