Is the “FirstOntario Centre” “in Toronto”? [closed]

There's a real confusion with the fractal dimension of major world urban centers: say you live in Williamstown, Victoria. If you're talking to someone who is also there in that major urban area, of course you would not say "I live in Melbourne". You'd distinguish.

But if talking to someone from Japan, you'd just say "Well I'm from Melbourne!" ("Mate!") It would be absurdist to mention "Williamstown".

So, New Jersey and Brooklyn and Connecticut don't exist to 99.999% of the world, they're just part of "New York".

Is the FirstOntario Centre in Toronto? 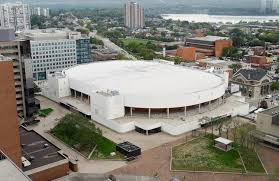 If you live in Toronto, do you "go to concerts at the FirstOntario Centre"?

If I'm going to a concert at the FirstOntario Centre, should I fly "to Toronto"? Should I "stay at a Toronto hotel"?

Is this FirstOntario Centre thing emotionally and urban-center wise a feature of Toronto? Or it really more of a separate thing - like Dallas / Fort Worth, say? Or is it "actually" part of somewhere else? (Buffalo? Chicago?)

The FirstOntario Centre is in Hamilton, Ontario, Canada, not Toronto. I've never lived in Hamilton, so I don't know how people talk about it there. It used to be called the Copps Coliseum, and was originally built to try to attract an NHL team to Hamilton. Hamilton is a city about 70km west of Toronto.

As for your other questions, depending on where you are coming from, you would not necessarily want to fly in to Toronto to go to a concert at the FirstOntarioCentre, (Buffalo might be cheaper, for example) and you would most likely want to stay in Hamilton at least for the day/night of the concert itself.

Wikipedia has more information about it here: FirstOntario Centre.

No, Hamilton is not considered part of "Toronto". It is not even part of the Greater Toronto Area, which I would use as the limit of areas that are not Toronto but that people might refer to as Toronto nonetheless. If I lived in Hamilton and wanted to explain it to someone in Japan, I might say that I lived "near Toronto".

I live in Toronto and did not even know there was a FirstOntario Centre, let alone where it is.

Hamilton has its own airport with several commercial passenger carriers. The main Toronto airport is relatively close, but Niagara Falls Airport, Buffalo, and London, ON airports are close enough that you might consider them. (Which you probably wouldn't from Toronto.)

Assuming you're coming from outside of North America (Australia?), I would recommend flying into Pearson Airport in Toronto (YYZ). It's a global airport with lots of flights. Public transportation to downtown Hamilton is cheap and fairly easy (coach, travel time about 1 hour, about $13 CAD one-way, runs hourly for most of the day [e.g. maybe not between 3 and 6 AM]).

If you were coming for a longer visit and wanted to sightsee etc. in Toronto, it wouldn't be insane to stay in Toronto and travel back and forth to Hamilton (about 1 hour by bus or train, although as others have commented it would probably be more expensive). You could take taxis back and forth from Hamilton to Toronto but it would be very expensive (certainly more than $50 CAD).

Not the answer you're looking for? Browse other questions tagged canada toronto cities or ask your own question.

8
Camping around Toronto, Ontario for the new year weekend
7
How to get from Toronto Downtown to Pearson Airport
7
Where to pick up arriving passengers at Terminal 1, Toronto Pearson Int'll Airport?
2
What are the non-hotel options for a 3-month stay in the Greater Toronto Area?
2
Public transport Toronto to Waterloo