Can you drive from Hong Kong to Mumbai?

For a Western person (say, US or European passport), not a local, is it possible / practicable these days to drive from HK to Bombay?

I guess once you get to Calcutta or Lucknow say, you're home free, but "HK to Mumbai" sounds more dramatic!

Is it actually possible to pass through the mountains in that little bit near Bhutan? Or?

Can you drive through any/all of Burma, Bangladesh, Laos these days?

Would you or can you go all the way around through Pakistan? Are there even any roads from China in to Pakistan physically?

One interesting specific question about one possibility:

Is there actually a physical road connecting these two? 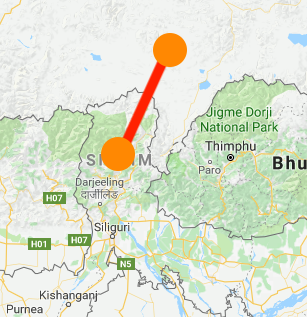 Or is it only mountainous wastes, unpassable?

Another specific question would be, can you drive from Burma to India these days?

Starting in HK, your project is dead in the water. Your car, which can only be a HK-plated car (or a Chinese car with double plates), would need a 粵Z plate to drive in China. Unless you have that, you're not going any further.

The safest passage would be via Laos, and I've seen Chinese plates in northern Laos, rarely below Luang Prabang, and a lot of Thai and Malaysian plates. But again, after that, you're still out of luck. I've seen Lao and Malaysian plates in northern and eastern Thailand, and a few Burmese plates in the Tak province, but that's it. I've never seen a single foreign plate in Myanmar, except a few adventurous trucks in the Kayin state, around Myawaddy. I suspect foreign cars are not allowed in Myanmar. And that's just the first of a few headaches.

Myawaddy-Yangon, a 400 km drive, takes upwards of 8 hours. If nothing breaks. The roads are bad, but considered to be pristine to what awaits you after that. The drive Yangon-Chittagong is about 2,000 km, avoiding the Rakhine state (and even if there wasn't troubles there, it's mostly jungle), and crossing East India. No telling how that would take. I just asked my Myanmar client, he said "The fvck one would want to do that?". 'Nuf said...

No idea again whether foreign plates are allowed in Bangladesh and India (and in which states). But at this point it's purely academic, as your project was dead in the water back in HK...

Chittagong - Mumbai is another 2,500 km, and again, whether any state allows foreign plates...? Unknown.

Theoretically you can, but it is very unpractical.

First off, forget about driving directly into India from China. It is simply not possible. The Sino-Indian border is subject of a lot of military tension, and the armu are guarding the border strictly on both sides. I am very sure that civilian automobiles are not allowed unless they have a very good reason. Moreover, as the Sino-Indian border is basically the Himalayas, I am not even sure that there are a lot of paved roads in the area.

Driving through Pakistan and/or disputed Jammu and Kashmir also sounds quite infeasible, given the relationship between the two countries. You might be able to enter India via Burma (Myanmar), and quite a lot of traffic go through the Sino-Burmese border everyday.

However, there are a lot of practical problems. You need a number plate (likely) for each country you drive in [EDIT: at least for China], and also a driver's license for each country [EDIT: at least for the Chinese driver's license, you must take the written test, which is offered in Chinese only. Meaning that driving through China is not an option unless you have a reasonably good command of the language]. You will pass through a lot of areas with poor road conditions and/or unrest: in the Chinese segment, there is none AFAIK, but around the Sino-Burmese border, and in parts of India, there is the problem of (1) bad infrastructure and (2) unrest. It is not necessarily safe to travel through these areas, and even if you manage to travel safely it would be a huge pain. The entire trip might take very long due to road conditions, etc.

EDIT: I am quite sure there's no direct highway from China to India. It's hard to prove a negative, but the only references I've found about highways connecting China and South Asia are the old Stilwell Road (which actually connects China and India via Burma), and the newer Sino-Nepal "Friendship Road". There are actually three stretches of the Sino-Indian border (excluding the border between China and disputed Kashmir): the Ngari-Himchal Pradesh/Uttarkhand border (where there's least tension, but still a lot), the Sikkim border (where a border standoff happened last year), and the Arunachal Pradesh border (which is subject to a bitter border dispute). The greatest problem here is that foreigners are not even allowed into these border areas in Tibet (due to the high military pressure here), so it completely rules out the possibility of driving directly from China to India. Since, as a foreigner, you'll not be allowed into the frontier zone in Tibet anyway, you can't take the Sino-Nepal Road either. Which leaves you with the only option of going through Burma.

6
Can I drive from Cuenca to Quito?
25
How fast may you drive on the Autobahn?
8
Are there any places in the US where I can drive a tank?
18
How to drive a car from Australia to Europe?
5
Road conditions on Eastern USA/Canada roads in Winter