What is the purpose of the revolving doors before immigration in CDG airport?

When exiting a flight originating from outside of the EU in CDG airport recently, I noted a long queue forming behind a large revolving door, between the exit of the aircraft and the immigration desks. The revolving door did not move in a constant way and had signage indicating for 8 people to enter and then exit, before pausing to allow 8 more passengers through. There was actually a much longer queue behind this door than there was at immigration; the immigration queue was only one minute long. Interestingly, the door also had one 'stop' inside the airside terminal waiting area, and one at an adjacent plane entrance.

This door was the only thing between the airplane exit and the immigration queue. My guess is that such doors are designed to restrict passenger flow, but this seems a bit pointless given that people are queuing for immigration immediately after it anyway, and normally gather in large numbers there.

What is the point of the mystery-door? Did they install a passenger flow restriction door so that the airport employees directing passengers into different immigration queues have an easier job? If so, why is there an inlet coming from airside?

It's a stupid question but I couldn't help but wonder during my long wait to pass through this door.

If this is one of the revolving doors I'm thinking about (in CDG 2A IIRC), it's due to the fact that, contrary to many airports, arriving and departing flows are on the same level, while they need to be kept separate.

There's a corridor along the length of the terminal (on the side where the planes are) that connects all gates to immigration. But this corridor needs to be crossed by departing passengers from the departure lounges to the gates.

I believe there's one such revolving door for each gate or something similar. If the gate is not used, the door is in a position where it lets everybody in the arrivals corridor go through (that's probably the reason you think there was only one such door, while I believe there are many more). As soon as there are departures on a gate, it goes into revolving mode, alternating between arrivals-to-immigration and departure lounge-to-aircraft.

The doors are actually visible on the CDG Terminal 2A map, though the map is not really that precise (it doesn't show the full plane-to-immigration-to-baggage reclaim path). Here's part of the map, with the crossing flows (arriving in red, departing in blue) added: 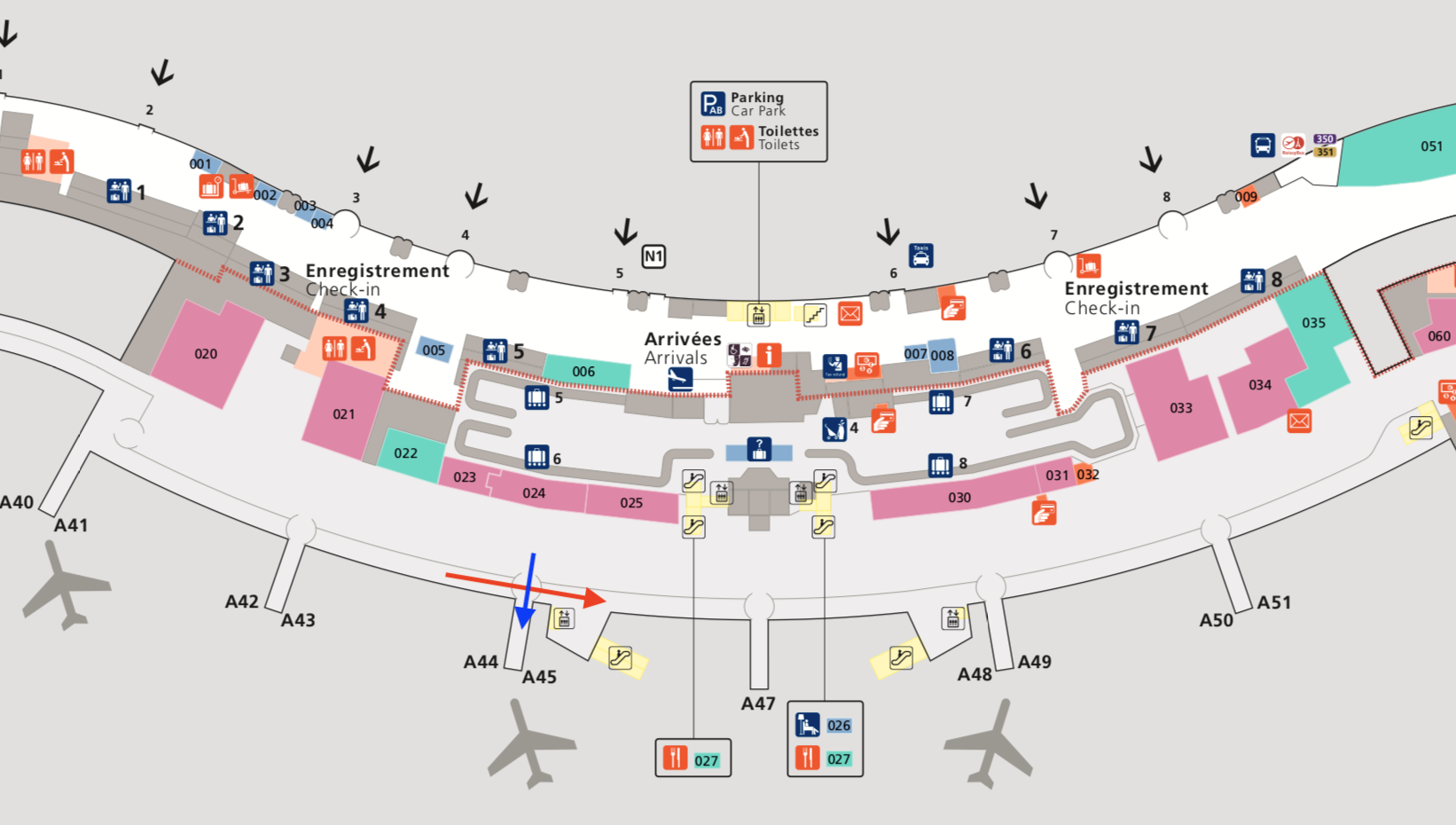 As pointed out by Zach Lipton in the comments to the OP, the door is a Flowside door, and here is an illustration of the flow separation: 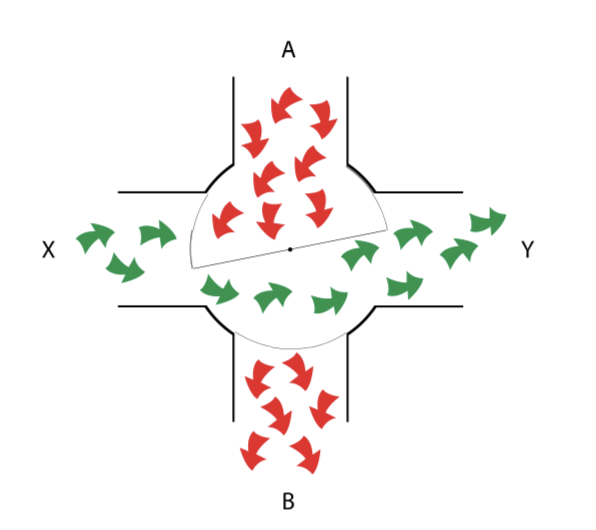 Keeping crossing flows on the same level was obviously not the greatest idea, and it was replaced in more recent CDG terminals by separating the arrivals and departures flows on separate floors.

2C has the jetway bridge "moving" ("swinging", really) between the top (departures) and the bottom (arrivals) floors. 2F has double jetway bridges, one for each level (very visible from the outside). 2E L and M gates have elevators/escalators sending arriving passengers to the top floor. Don't quite remember the setup in 2B, 2D and 2E K gates, though 2E K gates definitely has separate floors, and 2B/2D are planned to be retrofitted with a second floor to separate the flows, so it's possible they have the same setup as 2A.

Not the answer you're looking for? Browse other questions tagged france cdg airport-terminals or ask your own question.

5
In Paris, can one purchase pre-paid sim card upon arrival at CDG airport?
1
Book a flight from CDG Airport
2
Flight missed, can spend night on CDG airport?
3
Traveling through terminals CDG airport
6
Is it possible to meet my travel partner in terminal 2E at CDG prior to clearing immigration?
5
What's the fastest way to transfer from Terminal 2D to terminal 2E (M gates) in CDG airport?
4
Do I need to pass through immigration in CDG?
1
Do the ticket machines at the RER station at Paris CDG airport accept €20 notes?
9
CDG baggage claim before or after immigration?
1
Immigration checks in transit from CDG and MUC (DEL-CDG/MUC-GVA)