There is no need to rush into a DMV field office. Until October 1, 2020, a valid California driver license or ID card can be used for federal purposes, including boarding a domestic flight and entering military bases or secure federal facilities. After that date, only a REAL ID card or other federally approved documents will be accepted, such as a U.S. passport, passport card or military ID.

However, the U.S. Department of Homeland Security says (in combination with here):

California has an extension for REAL ID enforcement, allowing Federal agencies to accept driver's licenses and identification cards from California at Federal facilities, nuclear power plants and federally regulated commercial aircraft until October 10, 2018.
...
When a state's extension expires, the state is subject to the statutory prohibition against Federal acceptance for Federal purposes of the state's driver's licenses and identification cards.

In November, questions emerged about whether the state’s REAL IDs were compliant with federal regulations and whether the agency could meet a Jan. 10 deadline for certification. The Department of Homeland Security on Wednesday granted the state agency a last-minute extension to meet those requirements, despite the government shutdown, extending California’s deadline to April 1.

October 18, 2018 is a deadline for California, as a state, to become "compliant" with the Real ID act.

Some people interpret California's DMV page as a claim that California is already compliant, but this is not confirmed by the Department of Homeland Security.

Thus the overall effect is as follows:

So the two statements are not inconsistent; though California's is making some additional assumptions:

For those who like diagrams, here is a flow chart of the criteria as I understand them. 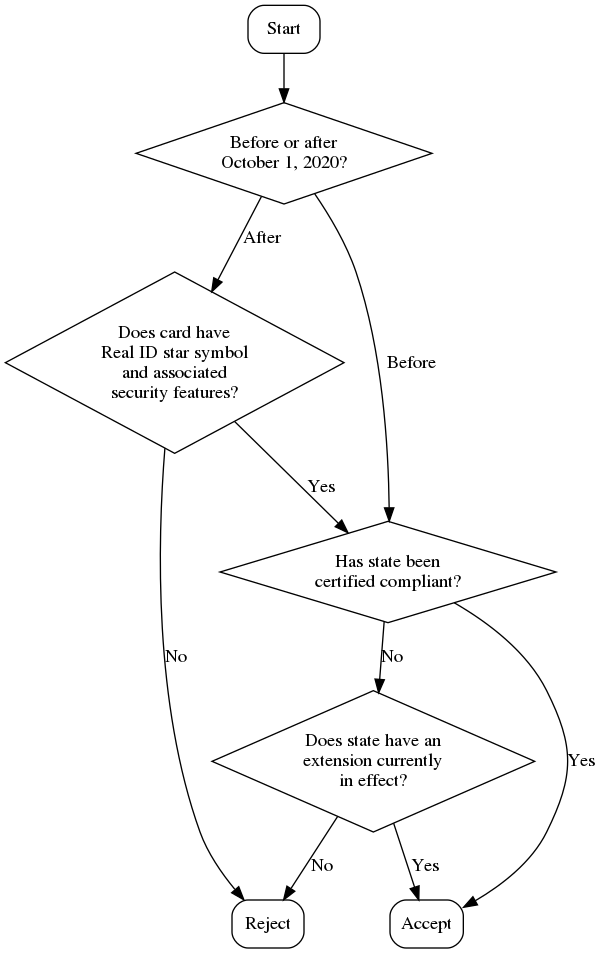 The "short answer" above is generally correct, but with one caveat: Once the current set of extensions expire on October 10, 2018 (October 18 is a typo), all "extension" states will move into an "under review" status which provides a "grace period" before Real ID is enforced. There are three possible outcomes of this review:

So the short answer is October 1, 2020. If the state can't prove to DHS that it's on the road to full compliance by then, that deadline could be moved up to January 2019 (or around January 2020 if it doesn't get the final extension), but that is highly unlikely. I'd say October 1, 2020 is 100% certain in certified compliant states, 99.9% certain in states already issuing them but not yet certified compliant (like California), and 99% certain in the remaining states.

Not the answer you're looking for? Browse other questions tagged usa air-travel california identity-cards real-id or ask your own question.

2
What forms of ID do I need to fly domestically from Arkansas after January, 2018?