Is this path in Krakow, Poland drivable?

I will need to drive along a road in Krakow, Poland and one section is not obviously suitable for driving (but also does not look bad either): 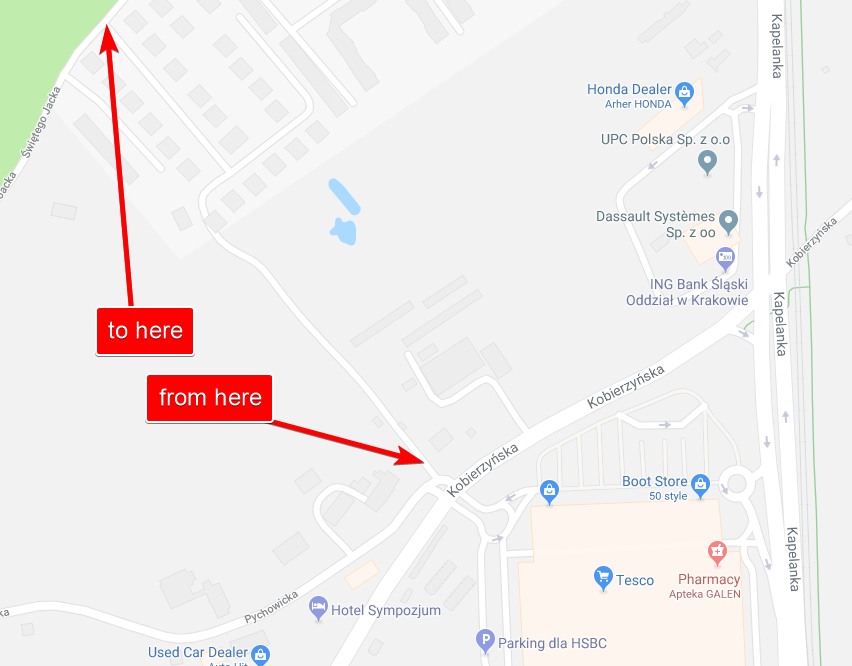 I followed this road and Google Street View for some reason stops short of the inhabited area a bit ahead (maybe because there was a temporary no entry sign for the time of a construction). It seems that there is just a short connection between that point and the buildings.

Is the section pointed above drivable? (with a standard car)

I've seen quite a few such areas when bicycling in Eastern Europe and it looks to me as if it is a private, not publically accessible estate. That is confirmed by the signage on the other side (where your 'to here' arrow is pointing). The estate entry is secured with a gate (although open when the street view images were taken) and there is a dead-end sign with the text 'private area - no throughfare'. I would be surprised if you would not also run into a gate before approaching the estate from the other side, passing beyond where the Google Street-View footage ends.

It is in Eastern Europe not uncommon that upper-class housing is built in fenced-off estates, allowing access only to residents and genuine visitors. Both Google Maps and Open Street Map often fail to identify these estates as such and they are simply shown on the map as regular residential areas with seemingly accessible roads.

I can only advise you to try a different map. Google in general is not well-suited to judge the quality of minor ways. Openstreetmap has this area mapped in great detail: https://www.openstreetmap.org/#map=18/50.03489/19.91963

From this data: There is no road there, just a foot path. And there are several gates along the way.

The high-resolution imagery shows a lane for the entire path. Where the Street View ends, the sign on the right says 'Construction Site' 'No Trespassing'. It looks like the construction is done, so the lane probably does goes through now.

Not the answer you're looking for? Browse other questions tagged driving poland krakow or ask your own question.

7
Where can I find a good, printable map of Kraków (Poland)?
10
How can I get from Krakow to Prague?
3
How to get from the airport to the bus station in Krakow and how long does it take?
27
Krakow to Warsaw by train - is it scenic?
6
Salt mines in Poland -- differences between Wieliczka and Bochnia?
4
Fastest train from Krakow to Katowice
32
In the Netherlands, does the green stripe in the middle of a road always allow to drive 100 km/h?
6
Bus tickets in Krakow