What makes a highway different from other roads? [closed]

The "highway" term seems self-explanatory bug a bit confusing. In the US sense, it seems to define roads that are main arteries for long-distance travel but not necessarily freeways. Example: the famous Pacific Coast Highway.

I found highways in the US that are pretty close to freeways with off-ramps and median, and others that cross cities like streets.

The confusion comes from being used to roads in Europe. For instance, in France, there are "nationales" which are main roads that cross the entire country and often follow a similar-named "autoroute" (freeway with median). Such nationales do have divided sections and slow crossings of towns; it varies. Then there are the "départementales", road maintained by the "département" (administrative subdivision of second level), that may encounter the same characteristics as nationales altough divided sections are less frequent. From all those, I do not know which ones could be named as highways.

Then, is designing a road as highway based on:

There are a lot of factors, and it depends on the context. In fact, in Canada, a "highway" is just a public roadway under the law. A tiny sleepy little suburban dead-end street is a highway by this definition.

In common usage in North America, though, a highway is a high-speed rural route to take traffic to other cities/towns or other highways. They are usually paved, but in some more remote areas they may be all-weather gravel roads. There is nothing implied about whether they are limited-access (as a freeway or motorway would be); some highways are freeways (and all freeways and motorways are highways), but not all highways are freeways. Some highways are divided and have four or more lanes/carriageways, and some are just two-lane roads with a dividing line between them. (In Scotland, it's not uncommon to have single-track highways, with a single lane for both directions, and the odd passing place for someone to get over.)

In the U.S., highways can be federal (e.g. US 2 or Interstate 94), state (e.g. Montana state highway 16), or county (e.g. Montana Sheridan County highway 258). In Canada, highways are almost always provincial or territorial, but some rural municipalities or counties construct roads that approach highway status. It may not be obvious from the construction of the road as to which level of government built it.

Highways often pass through towns and cities, and non-freeways/motorways usually do so through local streets, with lower speed limits. Of course, communities grow as well, and these "highways", while still highways in the sense that we are discussing, may seem like a small town main street in some cases. (In fact, major highways pass as city streets through many big cities, but often, bypasses are built around cities so that a person doesn't need to navigate them. My city's busiest intersection is a part of the Trans-Canada Highway, but rural traffic would never go that way, taking the freeway bypass around the city instead.)

So... think of a highway as a road through rural country to other places. It could be a major 18- or 20-lane freeway like Ontario 401 or Interstate 5 in places, or it could be a narrow, shoulderless but paved (or even gravel) road through very rural terrain.

In the US sense, it seems to define roads that are main arteries for long-distance travel but not necessarily freeways.

Yep, that is exactly it. All freeways are highways, but not all highways are freeways.

According to the Montana Department of Transportation's Road Design Manual and the classification described in the American Association of State Highway and Transportation Officials A policy on Geometric Design of Highways and Streets (Green Book) (2), freeways are characterized by "full control of access, high design speeds, and a high level of driver comfort and safety" (MDT RDM Section 2.2.1.1). Arterials are classified by "a capacity to move relatively large volumes of traffic while also serving adjacent properties" (section 2.2.1.2). There are also collectors and streets. Here is a good map of all of them in Montana.

A probably more defined aspect of the difference in highways is the topic of access control, addressed in section 2.7. All freeways have full access control, meaning that "no at-grade crossings or approaches are allowed."

I think it is interesting to note that this manual makes no explicit differentiation of a highway vs. a road/street. In fact, never does it define the term "highway." However, due to context and the usage, it is reasonable to assume that all freeways, arterials, and collectors are highways, and everything else is a street/road.Here is a good graph from the manual: 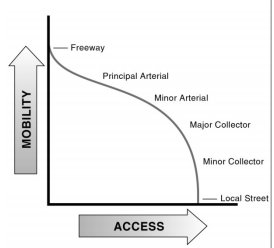 So, roads are either highways, or local streets. However, the term "highway" is very broad.

While the term 'highway' can mean a number of different things, in terms of traffic rules the term is frequently used to designate a road with special rules for high-speed long-distance driving.

For example in Ontario, Canada the roads with numbers in the 400 range (and a couple of others have special rules that attach to them. For example you can't stop (except in an emergency), you can't reverse, you can't drive on them with some types of learner license. The designation of these roads is done by the government - they specifically tell you which roads are highways.

In Britain the M-series roads are the equivalent. You have restrictions on what you can do and who can do it, and the list of roads is defined by the government. (Again a small number of non-M series roads have these rules applied.)

In the US, the terms Highway, Freeway, Expressway, Parkway and Turnpike are used in inconsistent ways and vary greatly by region. I know that in California, for example, the term Freeway is commonly used and (presumably) means something different from Highway.

In the Northeast, on the other hand, Freeway is rarely used and we refer to our high-speed, limited access roads mainly as Highways. Individual roads may be called Parkways (limited truck and bus traffic), Turnpikes (tolls by distance), or Expressways (the same as a highway, to my knowledge).

The upshot is that there is no official designation of a road as a highway. The word you're probably looking for is Interstate, which is a Federal term that comes with certain standards of width, speed, etc. : https://en.wikipedia.org/wiki/Interstate_Highway_standards.

Not the answer you're looking for? Browse other questions tagged driving road-signs or ask your own question.

13
Russia roadmap with information on the surface
8
Does driving 150 km from the Trans-Canada highway to Burgeo really take more than 3 hours?
12
How should you drive on rush-hour lanes (“Spitsstrook”) in the Netherlands if they are open?
43
Is it safer to drive up or down a dangerous mountain road?
15
What's an “un-made up road” in terms of car hire insurance?
17
UK Motorway Slip Roads - Speed Limit
13
On German bicycle direction signs, what does the background colour for bicycle highway pictograms indicate?