Safety and practicalities of eating dolphin meat in Taiji, Japan

At a recent Japan festival, amongst the various tourist brochures I got, one was for Wakayama prefecture, which included a page for Taiji. If I visited there, I'd have to decide whether or not to eat what the town is best known for outside of Japan: dolphin meat.

What health effects, if any, should I be concerned about? Anti dolphin-hunting activists claim that dolphin meat is unsafe because of high levels of mercury, and the Japanese government recommends that children and pregnant women should avoid eating it on a regular basis. Is mercury (or any other toxins) of concern for one-off consumption of dolphin meat, so long as I don't regularly eat food high in mercury?

Is the meat available year round, or only during the hunting season? I am currently anticipating visiting Japan in late May, early June, but Wikipedia states that the hunt occurs from September to April.

Finally, is a foreigner ordering dolphin meat at an izakaya likely to be treated with suspicion of being an anti dolphin-hunting activist?

First up, dolphin meat (イルカ肉) is pretty bizarre even by Japanese standards, and second, Taiji is a hurting fishing town smack dab in the middle of nowhere that's gotten a lot of bad press thanks to The Cove. So yes, if you show up there solo and start asking about eating dolphin, you're unlikely to get a friendly reception. I'm not saying you'll be in physical danger -- this is Japan, after all -- but you will definitely be assumed to have ulterior motives, esp. if you don't have a Japanese buddy along to smooth things about.

Healthwise, mercury poisoning is a long-term concern as it accumulates in fish and people, but a single meal is not going to do any appreciable harm.

So if you'd like to sink your teeth into Flipper, here are three restaurants in and around Taiji that offer or at least have offered it: 東牟婁郡太地町のイルカに関連するお店を探す

(Note that the first of the four listings is a paid commercial for a restaurant in Ise-Katsuura, not Taiji.)

Here's 20 incl. the four above all around Wakayama Prefecture: 和歌山県のイルカに関連するお店を探す

And last but not least, there's even a place called Uomaru in Yurakucho, central Tokyo that has a single dolphin dish (イルカの甘露煮, ¥799) on their regular menu. 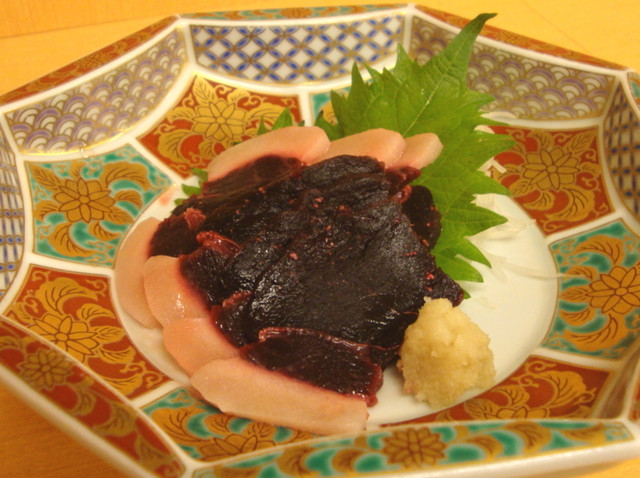 (courtesy of 海つばめ on Tabelog)

Yum yum? The cheaper joints offer dolphin sampler sets from around ¥1000, so it's not particularly expensive. And as far as I can gather, while the hunt is only in the winter, the meat is available frozen all year around and the three prefectures that hunt dolphin (Wakayama, Shizuoka and Iwate) cooperate to ensure supplies -- although the 2011 tsunami can't have done any good for the Iwate fisheries.

Not the answer you're looking for? Browse other questions tagged japan safety food-and-drink wakayama or ask your own question.

37
Is tea and coffee on the street safe to drink in India?
13
Is tourism beneficial to the economies of places affected by natural disasters?

62
What is wrong with eating while walking in Japan? It doesn't seem to be an issue in other Asian countries
14
Safety [petty crimes, mostly] in Japan
13
Eating fish eye in Japan
27
Eating cat meat as a tourist in Switzerland
5
Where can I try konoko and konowata in Japan?
8
Eating pasta with raw minced meat in Italy
15
Ramen eating etiquette
4
Safety in Tokyo and Ueda
8
Eating while out on a public street in Japan