Are there domestic flights that are cheaper if you instead use an international connection?

I wonder if there's pairs of cities in some countries where there's a feasible flights between them with international connection? Has to be at least comparable in price and convenience with domestic connections.

Example of this scenario: There's no direct flights between ROV and UFA, but both airports have flights to IST. Theoretically you could fly from Rostov-on-Don to Ufa with Turkish Airlines with Istanbul connection. In practice you won't, because you will be connecting in Moscow. But I wonder if there are places in the world when people fly to their own country by passing through another one.

So I'm looking for a non-trivial traffic/offerings for such travel between two cities, not just a theoretical possibility. It should probably show up on skyscanner (or similar) and be competitive there.

What you're talking about is "modified sixth freedom rights", which are a form of cabotage:

Cabotage is the transport of goods or passengers between two places in the same country by a transport operator from another country. ... In aviation, it is the right to operate within the domestic borders of another country. Most countries do not permit aviation cabotage, and there are strict sanctions against it, for reasons of economic protectionism, national security, or public safety. ...

The "modified sixth freedom" refers to the right to carry passengers between two points in country A through a hub in country B; for instance, a Boston-Toronto-Seattle itinerary. Such services are currently considered to constitute cabotage and are not permitted.

Since most countries prohibit cabotage, this probably means that such itineraries would not be openly advertised or bookable as a single ticket. For example, in 2002 Asiana was fined for offering flights from Guam & Saipan to the continental US via Seoul. In other words, such itineraries would be less likely to "show up on Skyscanner or similar"; you'd have to explicitly construct a nested itinerary (one round-trip ticket from A to C and a separate ticket from C to B), with all the hassle and risk such itineraries entail.

The main exception to all of this is the EU, where all member states have granted cabotage rights to all others. Most EU member states have well-developed domestic air networks (not to mention rail networks), so I suspect that traveling from (say) Marseille to Bordeaux via Frankfurt would not be cost-competitive with a flight purely within a country. But you never know; if such an itinerary exists, that'd be where I'd look for it.

EDIT: As correctly pointed out in the comments, cabotage laws don't prevent a carrier flagged in Country A to offer an itinerary connecting two cities in Country A via a city in Country B; they merely prevent carriers flagged in Country B from doing so. However, it has also been pointed out in the comments that such itineraries would involve a higher degree of hassle regarding immigration, which would reduce the incentive of a carrier to offer such itineraries. Also, given the hub-and-spoke model that most airlines employ, it would be a rare case in which this was the only option; and if other itineraries existed within Country A, I suspect they would be cheaper.

The triangle inequality means that flying A-C-B is always further than A-B; and minimum connection times will also cause problems. So it depends on how you weigh up the merits of ticket price, time required, and convenience (ease of transit airport etc.). For example, I can find prices for flying from Bristol to Edinburgh which are cheaper via Dublin than going direct: but it would inflate a flight time of around an hour to closer to 4, and risks mis-connection.

Supposing there is no direct domestic flight A-B, then an A-C-B via C in a third country will still struggle to compete with all the indirect flights A-D-B where D is in the same country as A and B. The scenarios I can imagine it working out are:

This last I can give an example of, but clearly without access to O&D flow data it can only be hypothetical rather than confirmed as something that people genuinely do. KLM has an extensive network from its hub at Amsterdam to the UK regions, offering links between cities that cannot be flown between domestically. For instance, Glasgow to Norwich can be flown this summer via Amsterdam for less than £150 return and journey times under 3h30 each way. By contrast, an off peak train journey is £138 (although I can see combinations of advance fares that save around £10, and many people have railcards), and takes at best 6h43 each way, requiring four different trains.

Finally, by way of personal anecdote I have actually flown domestically via an international connection. That was London to Bristol via Amsterdam, but for a special flight rather than for any price/time advantage. I took a train to London from Bristol to position for the flights and that was both faster and cheaper, despite booking into a first class carriage!

I see flights between Jakarta and Medan, Indonesia that are cheaper if they include a stop in Singapore.

Obviously this will change constantly, but currently a Google Flights search for KNO<-->CGK roundtrip 11/13-11/20 shows a $128 itinerary with a stop in SIN, but $178 for the cheapest domestic flight.

Just wanted to update that a colleague was able to observe LED - IST - KUF flight advertised by Turkish Airlines on some ticket search service. So it is in fact offered. Was it worth it price-wise? Guess not.

This hinges on what your definition of a domestic trip is, but New Caledonia is not independent – independence was rejected in a 2018 referendum – and thus while does not have the same status as Corsica or Martinique it still belongs to France.

New Caledonia’s airport in Nouméa is so far away from metropolitan France (and/or its airport is so small) that there are no direct flights. In theory, a domestic connection to Paris would exist via Papeete (Tahiti, French Polynesia), but SkyScanner does not suggest this as a viable option. Having plugged a random pair of dates, the fastest option uses Air France and one transfer in Narita (Tokyo) while the cheapest option stops in Sydney and Singapore outbound and in Amsterdam and Narita inbound (see attached image). 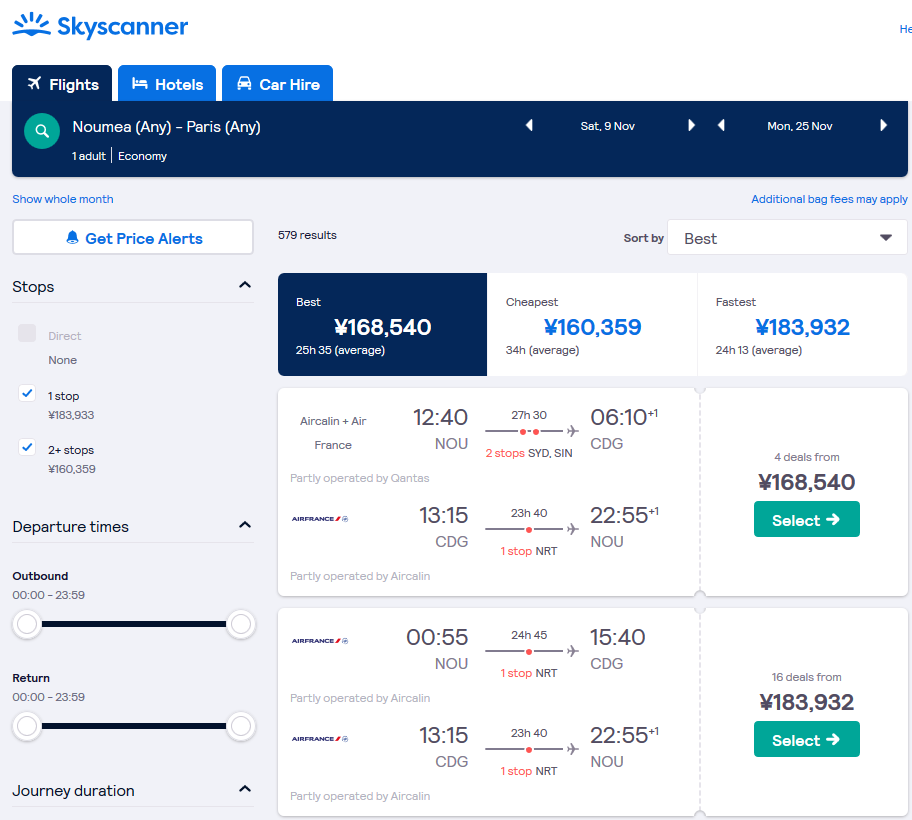 I tried playing around a little more to get a Nouméa–Papeete–Paris flight but even that would not be purely domestic as the Papeete–Paris connections all refuel in California.

Not the answer you're looking for? Browse other questions tagged air-travel where-on-earth connecting-flights or ask your own question.