Do I need to pay charges / taxes to drive in London on the weekend?

I live outside London (but inside the M25). And I'm thinking of attending a course whose classes are in the city.

I do have a car and I usually drive. Because of work, I think if they do classes on the weekend I'll attend those.

I'm aware that in general I should pay some charges to drive in London, this is why usually I use public transportation when I have to get there.

Though I'm reading here, assuming this is what I should look for, it doesn't seem to apply on the weekend.

Does this mean that if I wish to drive in London on the weekend I can do that for free?

For a standard car (e.g. not a van or a minibus or similar) there are only two places in the London area where you need to pay to use the road. One of them is the Congestion Charge zone active in central London weekdays 7:00-18:00, the other is the Dartford Crossing active all days 6:00-22:00 on the M25.

For larger and older vehicles including some minivans, minibuses, pickups and 4x4 vehicles (some of which can be driven by a standard B driving license) you might also need to consider the Low Emission Zone which is active in most of the Greater London area.

From 8 April 2019 new charges for diesel and older petrol vehicles will be introduced as well for the same area as the Congestion Charge zone, that will be active 24hrs a day every day.

The Congestion Charge zone is active on weekdays between 7am and 6pm. It is free on all other times, including some bank holidays. It roughly covers similar area than zone 1 on TFL, and you can see the big red C signs when it starts and how to avoid it: 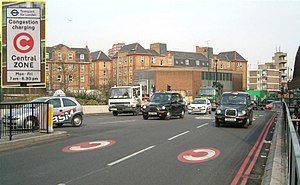 Here is a map as well: 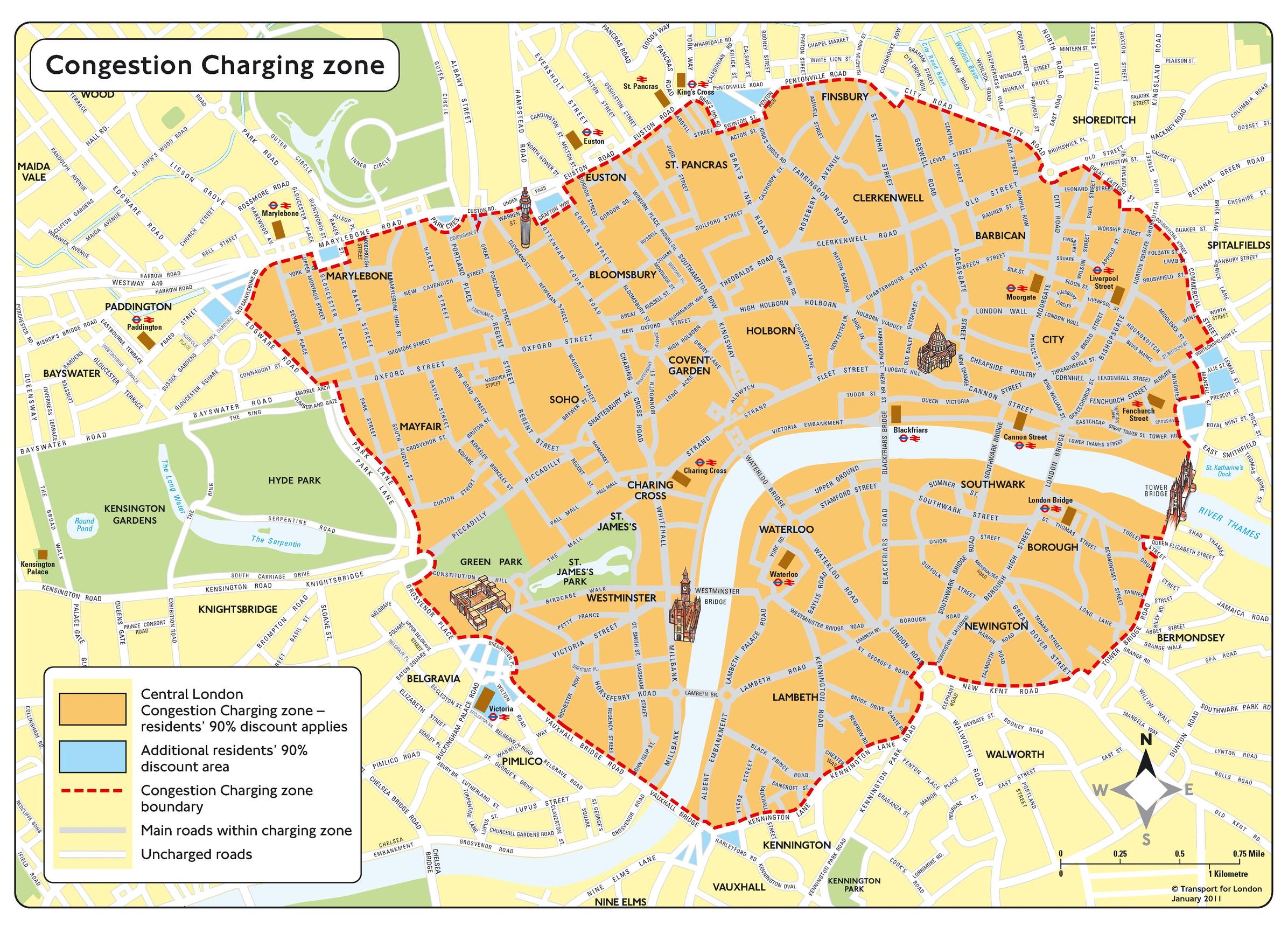 You can pay the charge online until the end of the next day. There is an additional charge for older (more than at least 10 years old) vehicles that don't meet current emission standards called T Charge, but this is also only active the same time and same place as the normal Congestion Charge.

The second place you have to pay is the Dartford Crossing, which is a Tunnel and a Bridge on the Eastern side of the M25 (technically not the M25 though, but it links the two ends of it over the Thames). It is active every day including weekends and holidays from 6am to 10pm. It is free during the night. You also have to pay it online until the end of the next day: 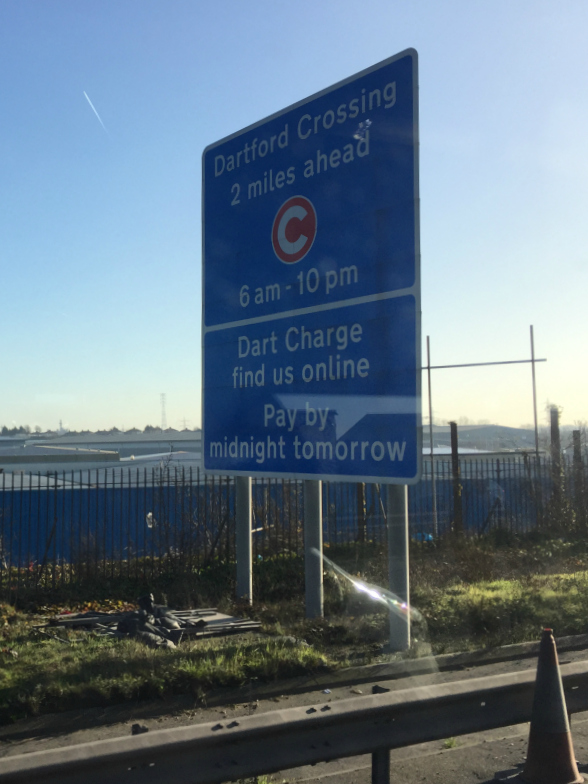 Here is a map for the location: 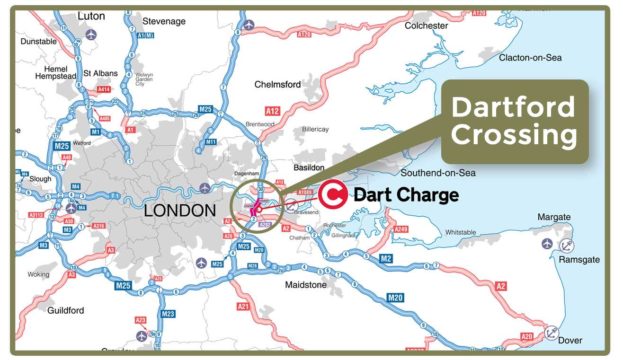 The third is only for older, non-car diesel vehicles that don't meet current emission standards, and is called the Low Emission Zone. It encompasses most of Greater London, but as a standard car user you don't need to worry about it (not even with an old diesel car).

However if you happen to drive into London with an old (manufactured before 2002) minivan, minibus, 4x4 or pickup that doesn't meet the emission standards you do have to pay it, and is fairly expensive (£100/day). Also if you happen to drive an older lorry or coach you also have to check if it meets the emission standards or not, as you might need to pay the charge as well.

It is active 24h a day, and there are also signs on when it starts and how to avoid it: 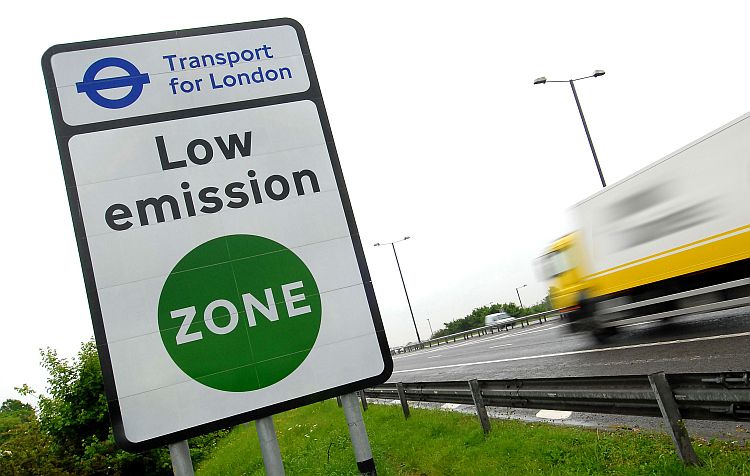 The above is up to date as of 9 March 2018. However for the near future there are plans to extend the Congestion Charge and T Charge zone to have an even higher price for almost all diesel and older petrol cars and this new charge will be active 24h a day inside the central zone. This will be called the Ultra Low Emission Zone and is set to start 8 April 2019. This would mean that for some cars you won't be able to enter the central zone for free not even on weekends.

Just to reiterate if you wish to cross the Thames here are the crossing that are free of charge all the time (except if you need to pay the Low Emission Zone):

The bridges between Vauxhall Bridge and Tower Bridge are part of the Congestion Charge Zone so are payable during weekdays, and the Dartford Crossing has it's own toll.

Very roughly, the zone is bounded by Euston Road in the North, Tower Bridge in the East, Hyde Park in the Westand and includes Vauxhall in the South.

There is no charge at Weekends.

Not the answer you're looking for? Browse other questions tagged uk driving london taxes or ask your own question.

17
How far into Washington, DC should I drive before taking the Metro?
11
Driving into Germany over Easter weekend
8
Train passport control from London to Paris
10
Going to the Wimbledon tennis championships while in London
4
Visa type for Scotland to attend Conference from India
7
How does the new London T-Charge apply to foreign vehicles?
9
Why does National Rail suggest an Off-Peak Return for a Friday morning into London? Is the ticket valid?
1
Chinese national, UK residency, supported by partner - how to to get a Schengen visa?
2
What laws should I be aware of as a motorcyclist going from the UK to Germany via the Netherlands