Is it worth reapplying UK Visitor visa (self employed)?

I have applied for UK visitor visa and got refused with the below 2 reasons: 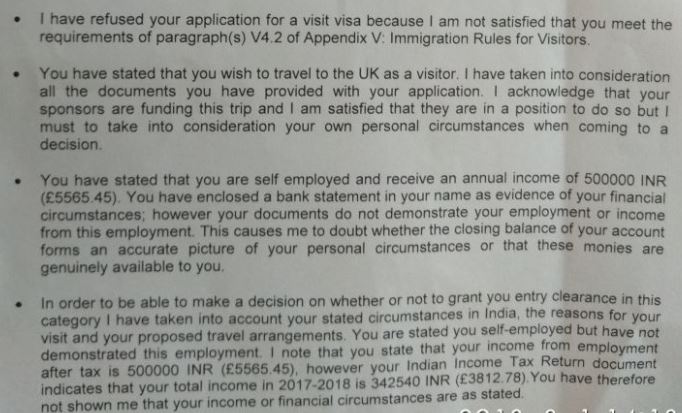 I am a self-employed Legal document writer (similar to Property Solicitor) applied from India along with 2 dependants - my wife (unemployed) and son (5 years old). My Sister and brother-in-law living in London are sponsoring our travel and accommodations for 2 months of our visit.

Appreciate your response and thanks in advance.

This is a bit beyond my expertise, but it looks as if you have presented the visa officer with a situation which is too complex for them to determine whether your financial situation is what you say, and whether it is sufficient for a visa. In particular the issues are:

The final issue is that there seems to some confusion between gross income and net income. That is probably resolveable though.

The issue of the amount of effort involved to understand your business accounts is a real one. The visa officer will simply not have the time to process detailed and complex accounts, and if they cannot find the information they need in the time available they will deny your visa. It is your responsibility to demonstrate to the visa officer that your financial situation is what you say it is.

I will frankly admit I have no idea how to address your problem. However this is the sort of thing that the visa officer wants to see. Providing this will make it easy for them to grant you a visa.

You might consider getting a qualified professional bookkeeper to do your business accounts, and have them make an official (notarized?) statement of your business' profit. I don't really know how well that would work.

Our member-on-sabbatical, Gayot Fow, has dealt with this question on his blog. At his invitation and for the benefit of the OP, I repost the body of his answer here.

Essentially the OP’s financial evidence is inconsistent and this is partially due to his operating a cash-based sole-proprietorship. The OP received a refusal notice based upon this and uploaded a partial scan of his refusal notice. The partial scan did not include the second page of the refusal notice so we don’t know the exact refusal grounds, but there’s enough there to make a solid guess that the grounds are V 4.2 (a) and (c). If our guess is correct, then the article at UK visa refusal on V 4.2 a + c (and sometimes ‘e’) fully answers the question and I cannot see how adding something to it improves the existing article. To demonstrate, let’s drill down on the OP’s narrative and accompanying refusal notice and we can do this with a metaphor drawing the terminology used in American baseball…

The OP is using a co-sponsor to assist. The ECO has acknowledged that the co-sponsor has the capacity to help and so has accepted the co-sponsor without further comment. What is unsaid is that applications in this particular profile have a lengthy history of abuse, much of which has been costly in terms of court proceedings and the public funds needed to house and accommodate the person and their dependants. Accordingly, decision-makers for a visitor application will spend much more energy examining the applicant’s personal circumstances and how that fits in to a visit to the UK at this particular point in time (or more bluntly ‘why do you want to do something that you cannot afford to do?’). This ties back to the referenced article with a section that opens with…

in many cases, needing a sponsor actually increases the onus on the applicant to demonstrate that they qualify.

To be sure, one can read through the archives and find dozens of refusals where the use of a co-sponsor did not decrease the risk in a given application.

The OP operates a sole-proprietorship, much of which is cash-based and none of the submitted evidence appears to support the OP’s claims to solvency and income.

Let’s digress for a moment… There is nothing inherent in operating a cash-based business that signals an intent to abuse one’s visa. However, in a lot of cases, it can signal a connection to the ‘black economy’ wherein the income may not be received legally (prostitution, drug dealing and so on) or the person may be avoiding taxes. UKVI’s position in such cases is simply, ‘…we see lots of self-employed applicants who can demonstrate their income has been gained lawfully, what makes you different?…‘ or in the more generic postulate… ‘…if you are happy to violate the law in your own country, what prevents you from violating the law here?…‘

Another interesting aspect of cash-based income is that the skill on offer satisfies a need that occurs everywhere and already exists in plentiful supply in the UK ‘black economy’ and when UKVI is seen as fuelling the ‘black economy’ by adding more resources, social protests can (and frequently do) take place. So as a result, UKVI needs to be especially cautious when an applicant fits this type of profile.

Returning to ‘Strike 2’, it’s clear that the OP is already in a high-risk profile from the get-go. It’s easy to read in the reference article that ‘…the application was visibly doomed before the person even arrived at the VFS to give their biometrics...’ and ‘…Obvious (and severe) evidential shortfalls that are needed to establish the applicant’s (or sponsor’s) personal circumstances …‘ And so after much belabouring of the obvious, we finally arrive at…

When I use the word “premise“, it takes on a special meaning, specifically that which forms the basis for a visa application at this particular point in time. Is it part of a regular visiting scheme? Is it a family application where visits are alternated between the home country and the UK? Does the proposed host have a historically strong relationship where a visit is appropriate right now? Does the proposed host have a great history sponsoring other applicants? Has the host previously visited the applicant in their home country? In the case at hand, it can be inferred (from the absence of text in the refusal notice) that the OP failed to provide a solid premise. This is almost always a show-stopper in its own right. Another noteworthy canonical case of a failed premise is often found in the visit application where the premise is a blossoming internet relationship however the applicant is invariably unemployed, has no immediate career prospects, living with their parents, or otherwise totally ‘ without anchors’ to their home country. In that case a premise may be offered along the lines of ‘…we want to see each other in person…’ and we already know that ECO’s do not find this to be a viable premise.

So in the American parlance, the OP is ‘three strikes and you’re out’. The rough UK equivalent might be ‘done and dusted’ or ‘that’s it and all about it’. I am not a cricket fan, but if you have a great equivalent drawn from cricket, do leave a comment.

The OP’s questions are…

1.Can I reapply with the same supporting documents (current and personal statements), and explaining the nature of my business is mostly cash transactions?

2.How should I explain my cash transactions and lack of evidence (in bank statements) for salary/dividends (although the tax returns show these as income)? Will a letter from my accountant and the business bank detailing my profession and finance help?

Both of these questions are fundamentally opinion-based, as not even recognised experts in the field will agree on a single approach. TSE, at least theoretically, eschews opinion polls, however, and inexplicably, they have agreed a generous bounty on this one. Think about it… You have given a long-winded list of dot-points about the peculiarities of being a property solicitor, but who knows stuff like that on TSE? How are they supposed to know if your explanations are worthy or not? So essentially your question is ‘off-topic, opinion-based’ or ‘unclear’. But aside from that, let’s take the questions head on by offering my own opinions.

For question 1, anybody can make an application anytime they want regardless of their history (and as long as they pay the fee, have a passport photo, etc etc). You can explain all you want, but the issues from their side will be ‘…how come other property solicitors are able to operate their business without being cash-based?…‘ and ‘…you gave us stuff where the numbers do not tie out, how does this demonstrate your competence at operating a sole-proprietor in the first instance? What is an explanation supposed to prove?…‘ In other words, it’s doubtful that you know what your income is or are otherwise unable to provide a consistent number. An explanation, unless crafted by an expert, is more likely to make matters worse (with a prior refusal, and now marked as someone they do not fully trust, your explanation will introduce inconsistencies and invite refusals based on the discrepancy method).

For question 2, it looks like you have not been operating your sole-proprietorship in a way that anticipates making a UK visa application. Introducing another party, such as an accountant, at this stage is less likely to help because they were not introduced at the initial stage. Why not? Anyway, the accountant’s credibility will become an issue it’s unclear what they could do to sort out statements given in your first application and how they would go about verifying the information. But of course if the accountant has an established practice area and a known reputation, it can be helpful (in the absence of anything else). Or alternatively, you could have a known expert in property law explain that the way you are running your business is the norm. But even so, it will be an awkward task to explain why the numbers do not tie out when they are supposed to tie out.

And so the answer is (IMHO) to start running your business in a way that anticipates the transparency and consistency needed to make successful visa applications. Then after a year or so, make a fresh application. Also, having your sister in the UK arrange a consultation with a regulated adviser can be of enormous help. I have no problems at all if she shows him this article to clarify portions of it. Or to agree with it or discredit it or to nit-pick on it or whatever. It’s all good. Anybody else is similarly invited to use this answer for whatever purposes they want.

I do not recommend making a fresh application in the near-term (even though you are entitled to make one) because it invites the tailspin of serial refusals. Also, serial refusals get a lot more expensive for a solicitor to unsnarl. Moreover, when a solicitor starts seeing the discrepancy method being used, they are more likely to start asking if you have made a full disclosure to them and liable to up their fee anyway.

Not the answer you're looking for? Browse other questions tagged uk indian-citizens visa-refusals standard-visitor-visas or ask your own question.

3
UK Visit Visa refused second time due to lack of funds and unclear documentation. What are my options?
0
Effect of previous refusals on UK visit visa?
1
UK Visa application for conference - Self employed
1
Should I attach both my bank account statements for Schengen visa?