Is there anywhere at/near Casino station where you can buy food, when changing between the CountryLink bus and train?

If you take the daytime CountryLink train from Sydney to Brisbane, it somewhat annoyingly turns into a pumpkin at Casino.... At Casino, you have to change to a bus to continue your journey onwards to Brisbane via Byron Bay and Surfers Paradise.

While on the train, there's a pretty decent buffet service, serving hot food, snacks, a very nice afternoon tea etc. On the bus, nothing :( And no refreshment stops either.

If the train isn't running early, the timetable shows a 24 minute wait between leaving the train and getting the bus. I believe the train is often early into Casino, so you'd often have longer.

Is there currently anywhere either in the station, or a short walk from it, which'd do a quick bite to eat/drink/takeaway? Be that a cafe, pub, shop etc?

Realistically there's nothing near the station food-wise, with the exception of a Coke machine and a snack machine within the waiting room at the station itself (make sure you have coins!)

Even though you may have a 24 minute wait, the process actually varies dramatically depending on how many people are on the bus(es). When the train arrives the buses will normally be lined up outside of the station (having been used to bring in people to catch the XPT when it turns around and heads south again). People generally file pretty much straight off the train and onto the buses. For the more popular routes (which basically just means the one to Brisbane) there will be multiple buses, and they will normally load them one at a time, and they will depart as soon the they are full. The last bus will normally not leave until the scheduled time, but obviously the earlier the bus you get on, the earlier you'll arrive in Brisbane!

It's also not uncommon for the inbound XPT to be at least a few minutes late (in fact, I don't think I've ever seen it actually be on time into Casino!), so your 24 minutes probably isn't a real 24 minutes...

Your best bet is probably just to either bring something with you, and/buy something from the buffet car on the train (keeping in mind that they often run out, and they close a while before they get into Casino)

The other option is to catch the night train, which is a train all the way to Brisbane, arriving early morning (exact time depends on whether it's during daylight savings or not) - or just fly which is normally going to work out cheaper!!

Well, I am not the expert in Australia, but I love playing with Google Maps. Anyway after some playing I got this corner store which is 300 meters away, 4 minutes walking (I suppose it sells food because my search query was food): 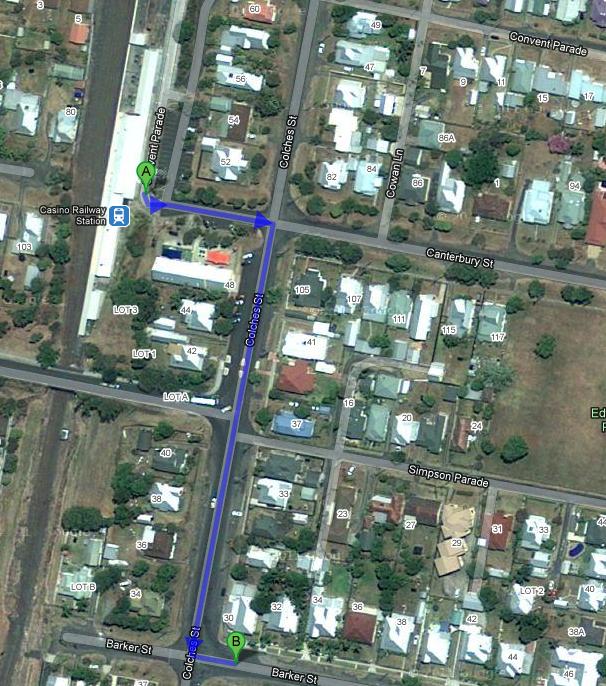 Also, there is a McDonald's 800 meters away (9 minutes walking) which seems risky since you will have 24 minutes.. if you arrive earlier this will be a good option: 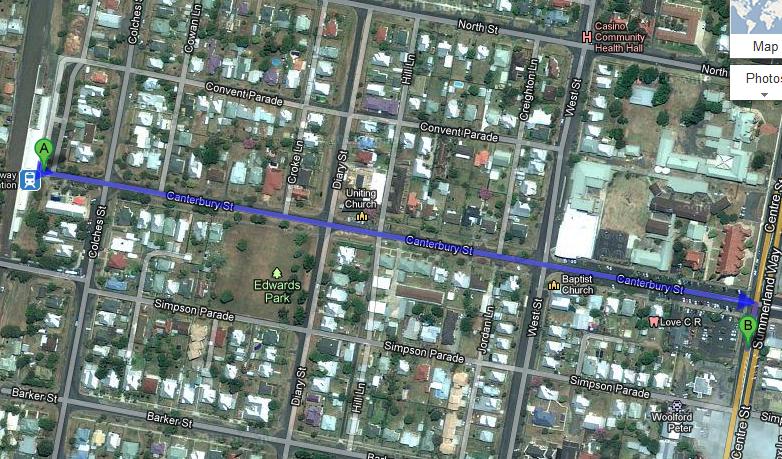 Not the answer you're looking for? Browse other questions tagged australia food-and-drink sydney new-south-wales brisbane or ask your own question.

15
Places to stop off along the Sydney to Brisbane railway?
7
Are there charter flights between Australia and New Zealand that you can join?
4
At Brisbane Cultural Centre busway station, how do you know where on the platform to wait for a given bus?
3
Can you access the Roma Street Parklands from Roma Street Station, without a train ticket?
2
Where can I buy egg and chips near Glasgow Central?