What is the longest journey made of 2-hour flights from London?

Starting from London, what are the furthest places that can be reached by commercial flights, with any number of flight segments and stopovers, but all flights lasting under 2 hours?

For example, can you make it to Shanghai? Tokyo? Sydney? Cape Town? And with what route?

FlightConnections.com lists flight times rounded off to the nearest 5 minutes. Limiting oneself to connections listed on this website as having a flight time of 2h00m or less (as of December 2017), one can construct the following 17-segment itinerary from London to Tokyo, via Shanghai:

It also appears to be possible to make it to Sydney in 27 segments. Proceed to Chengdu as above, then:

Finally, London–Cape Town can be done in 15 segments. Proceed to Belgrade as above, and then take the following flights:

Given the inefficiency of the route I found through Mozambique, there may be a route to Cape Town with fewer segments via western Africa rather than eastern Africa. 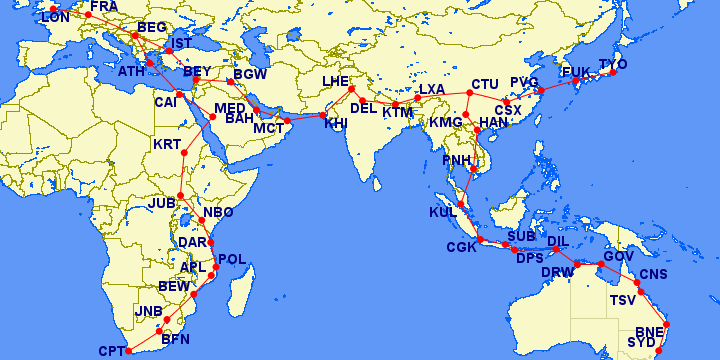 All of these itineraries are presented with the caveat that I have not verified the flight times with the airlines in question; indeed, I am not 100% convinced that Flightconnections.com is handling the time zones correctly for some of the flights in Africa.

Not the answer you're looking for? Browse other questions tagged air-travel factoids or ask your own question.

29
What is the fastest theoretical route for the London "Tube Challenge"?
9
How much does it add to a North America / Australia journey to go "the wrong way"?
15
What are the drawbacks of taking TWO (unconnected) indirect flights?
0
Checking return departure time
44
What is the cheapest regular-priced scheduled flight I can book and fly?
16
What airport has the fewest regular commercial flights?
7
What is the name for the set of the outbound segment and inbound segment together?
7
Why does a flight from Melbourne to Cape Town need to go via Doha?