Could you be denied entry to a country because your heritage and name sound Turkish?

Coming from a Turkish heritage and having a Turkish-sounding name (I don't speak the language), could I be refused entry into a country such as America?

I attached a very recent article about a man being refused into the USA even though having the correct paperwork. 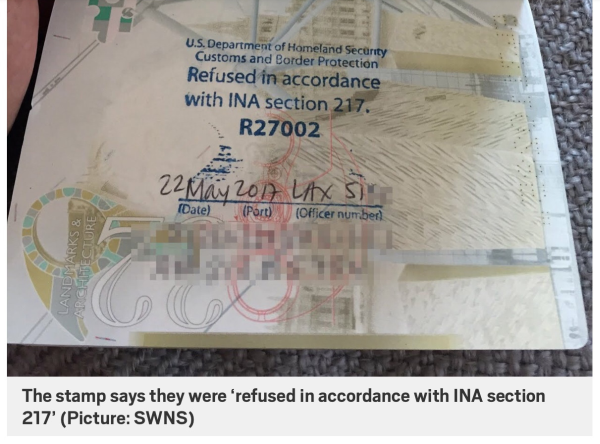 Although they were never told why they were denied entry, Natasha suspects it was because of her husband’s Turkish name and origin. Ali is British, however, and holds a British passport.

‘I am in utter shock that this has happened,’ she said. ‘We had just got married, we were on our way to our honeymoon as excited as anything, and never expected that we would be deported.

In a nutshell, no, the USA will not deny entry because of your name. The article (which, incidentally, is from a free newspaper with low journalistic standards) even admits that the couple was not told why they were refused entry, and that the "Turkish name" thing is just the wife's theory:

Although they were never told why they were denied entry, Natasha suspects it was because of her husband’s Turkish name and origin.

The refusal stamp references INA 217, which in turns means that they may have been denied entry for any of the reasons in Section 212.

So what was the actual reason? Given that we have near-zero data to go on, it's difficult to speculate, but presumably the story they told at Immigration didn't match up with what they said when applying for the visa, or they raised suspicion that they were planning to work and/or overstay in the US. (You will also note that Section 212, which is the complete list of reasons why you may be denied entry to the US, says nothing about having a "Muslim name" or anything remotely similar.)

9
US citizens previously refused entry into UK. Does this refusal of entry mean that we will have problems going back as tourists?
13
Can you be involuntarily denied boarding if you already checked in AND already have your seat assigned?
2
Denied Canadian ETA because of my purpose of travel and ties to my country of residence. How should I reapply?
23
Could I be denied entry into Ireland due to medical and police situations during a previous UK visit?
7
How to answer "have you ever been refused a visa, denied entry or ordered to leave Canada or any other country?"