What do these white blocks mean at an intersection?

Here in Germany where I live, in lieu of stop signs, a lot of intersections have things that look somewhat like this: 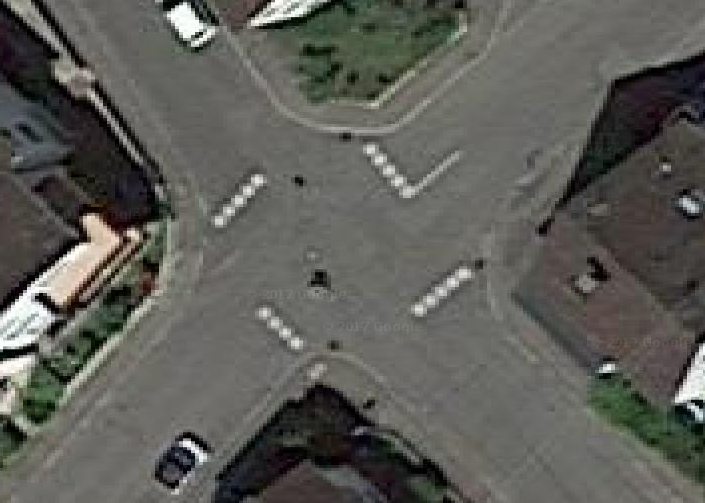 It's a set of four or five white blocks. It's similar to the solid line you'd see accompanying a stop sign, but these are separate blocks, and there's no stop sign.

I've made assumptions about what these are based on observation, and I've also searched fruitlessly for information about them.

What exactly do these mean for traffic? And is there an authoritative source where I can read about them?

If you see those lines without any sign at the road, it's usually there to remind people to respect the "right before left" rule. In the picture, you can see a white car that seems to approach the crossing from "bottom left". If there was another car coming in from "bottom right", the white car would have to stop. If there was a car coming in from "upper left", the white car would go before that one.

A question always asked in driving school: who gets to drive first if there are cars coming in along all streets at the same time? in theory, drivers should communicate using gestures, in practice, some guy in an SUV will go first :)

In contrast to the stop sign, the broken lines are an indication that you don't have to stop if you can see that there is no car coming from the right before you reach the line - as Eike already mentioned, you have to stop at a stop sign no matter what, even if it's 3am and you are the only person out in the street.

You are supposed to stop here to let pass cars that have right of way. However this is just a suggestion and serves as an indicator where it is safe to stop; stopping is not mandatory (so it is not actually in lieu of stop signs, because you'd have to stop at a stop sign even if you were the only car in town).

The ADAC (German auto club) has a complete (English) list of the names of German traffic signs. The wait linie is sign 341. There is also an (unbroken) stop line which usually accompanies the stop sign and indicates where exactly you have to stop.

The relevant law for all things related to street traffic is the Strassenverkehrsordnung.

Not the answer you're looking for? Browse other questions tagged germany road-signs or ask your own question.

51
What does this traffic sign with a crossed-out black octagon mean?
5
Hotel room was problematic - what's a typical compensation?
7
What do these signs in the Czech Republic mean? [Picture included]
20
What does the Apple Command key symbol (⌘) mean on Icelandic road signs?
57
What's the meaning of the sign "Broken white line only marks the centre of the road"?
5
What are these white things in Stuttgart
4
What do these traffic signs mean? I saw them in Bali, Indonesia
33
What does the Free Recovery sign (UK) actually mean?
2
What are the rules around intersections with flashing lights?