How do I access bicycle lockers at UK train stations?

In the UK, some train stations have bicycle lockers, such as in Earley or Lancaster. It looks like smaller stations (but not the very smallest) are more likely to have those than larger stations; I couldn't find any at Reading, Paddington, or Birmingham New Street.

But the question is: how do I access those lockers? I couldn't find any relevant information on the websites of National Rail, South Western Railway (manages Earley), or Virgin Trains (manages Lancaster); I only find information about taking bicycles on the train, not parking them securely beyond the useless "you can park your bicycle at the station".

How would I get apply for access to one of those bicycle lockers? Who manages them? Are they by subscription only, or can I rent one for the day if available? With Google Search, I found results for different parts of the USA and for Ireland, but the UK ones remain a mystery.

Cycle storage appears to be a local amenity, and not centrally managed by the railways. For instance, in the West Midlands, they are operated by Network West Midlands and you would rent one from them. Things are organized as a Bicycle Locker User Club (BLUC) with Transport for Greater Manchester locations. Local councils may also oversee storage facilities, both at and outside of railway and bus stations, for example Wandsworth, London.

As with such schemes in the U.S., the bicycle lockers are aimed at local commuters who would ride their bicycles from home to the station, then take the train to work. The Network West Midlands requires a yearly subscription, and initial membership in the TfGM BLUC is for two years. In any case, we may surmise from these requirements as well as the wording of the applications they are not intended for ad-hoc users or visitors— for most of whom ordinary bicycle stands or racks might be deemed adequate.

This isn't a set of individual lockers, rather it's a secure bike shed which requires a pass card to access, but I know of a similar facility at Surbiton station (also managed by South Western Railway).

I found a blog, from a disgruntled commuter who couldn't get a space in the secure parking shed. It's from 2010, when it first opened, when the franchise was run by South West Trains (SWT).

Apparently the way to get a card was to be lucky:

I spoke to the SWT police liaison officer on Wednesday 12th May, when I first saw the poster telling us that spaces had all gone. He called me back to say that the station manager had put up a poster and spaces where taken on a first come, first served basis. All places when within the day.

Another cyclist told me that he had asked at the service counter and had his name had been written down and was later told he had been successful.

I was aware that the secure compound was coming, from discussions with SWT Customer Service Centre, when the construction started, I was actively looking out for a notice telling me how to apply for a place. I did ask at the counter, to be told that customers would find out in due course. If I can miss the publicity then there was something flawed.

This would tally with choster's answer that it's a local amenity, and possibly not a well managed one at that. Your best bet may be to talk to station staff to find out local information.

At many smaller stations, the bicycle lockers are essentially unmanaged. It is just a metal box, you turn up, put your bike in, then put your own padlock on the door. 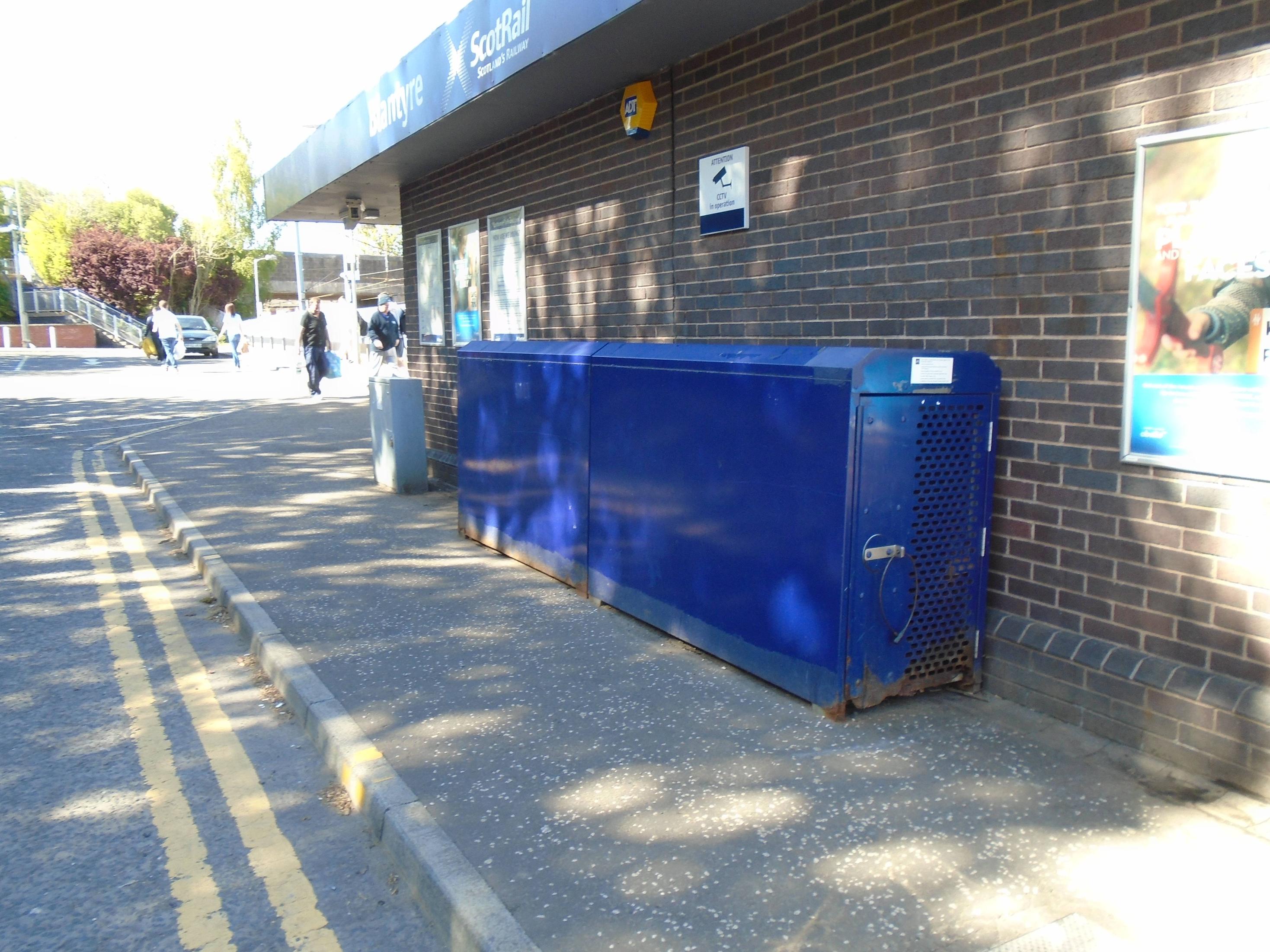 Lockers at Blantyre station. Photo from Cyclestreets, by Andypreece, CC-BY-SA

So no cost, and no need to book it in advance. But it does mean it is first come first served. Small stations may only have a few lockers, and they are often filled up by commuters in the morning, and in use for the whole day. So you are unlikely to get a space, unless you arrive early in the morning.

Most stations have plenty of other bicycle parking, ie racks. This is usually next to the lockers. So no problem finding somewhere to park your bike. Though this means you need to lock it securely to the rack, as well as remove any parts that could be stolen, eg lights. And probably not as much protection from the weather, though some racks are partly under cover.

Not the answer you're looking for? Browse other questions tagged uk trains bicycles or ask your own question.

4
Lockers at train station Hardbrücke in Zürich?
9
Can I take a bicycle when boarding a VIA Rail train at a small (flag) stop?
9
Is there secure bicycle parking at the Reading train station?
6
How to find bicycle parking in Taipei?
3
Which train stations in Brussels have bicycle access?
8
Does the high-speed train from Chongqing to Chengdu depart from Chongqing or Chongqing North station?
44
Who compensates my UK train ticket when the train in the ticket didn't exist?
3
Which Caltrain stations only have parking for Caltrain train customers only?
7
How do I find if a specific train (RE60) carries bicycles during morning rush hour?
11
Can I take a boxed bicycle on a German train?