Which part of Seoul's ancient city walls is closest to Hongdae by foot?

On a previous trip to Seoul I became very interested in the old city gates and city walls. A couple of the largest gates are famous and are close to the city centre. But the smaller gates and surviving sections of the wall don't seem to be well known at all.

I've seen the wall referred to by various names including "Seoul Fortress", "Fortress Wall of Seoul", "Hanyangdoseong", "Seoulseonggwak", and even "The Great Wall of Seoul".

Its Wikipedia article only mentions its history, no maps, no tourist info.

Most of the useful info I can find is in various blog posts: one from 2009, one from 2010. Maps seem to be impossible to find, especially ones which show the location of the walls along with locations of roads or the subway system. And even pasting placenames from the blogs into Google Maps usually doesn't help.

I know there is one part of the wall recently opened for hiking but it required you to bring a passport and is closed at 3pm.

What I'm looking for are the lesser known parts of the walls, no matter their condition. Many of the backpacker and guesthouse style accommodations are in the Hongdae area of Seoul and I like walking random streets. If any part of the wall is within about two hours walk from Hongdae that's what I'm looking for. Asking locals doesn't seem to work because they don't understand why I would walk rather than take the subway.

Well I'm pretty sure I found it by pure coincidence about a week ago on my way bag from a many-hours-long random walk around Seoul.

On the way back for variety I came a different way, also randomly and in the dark. This is where I found myself: 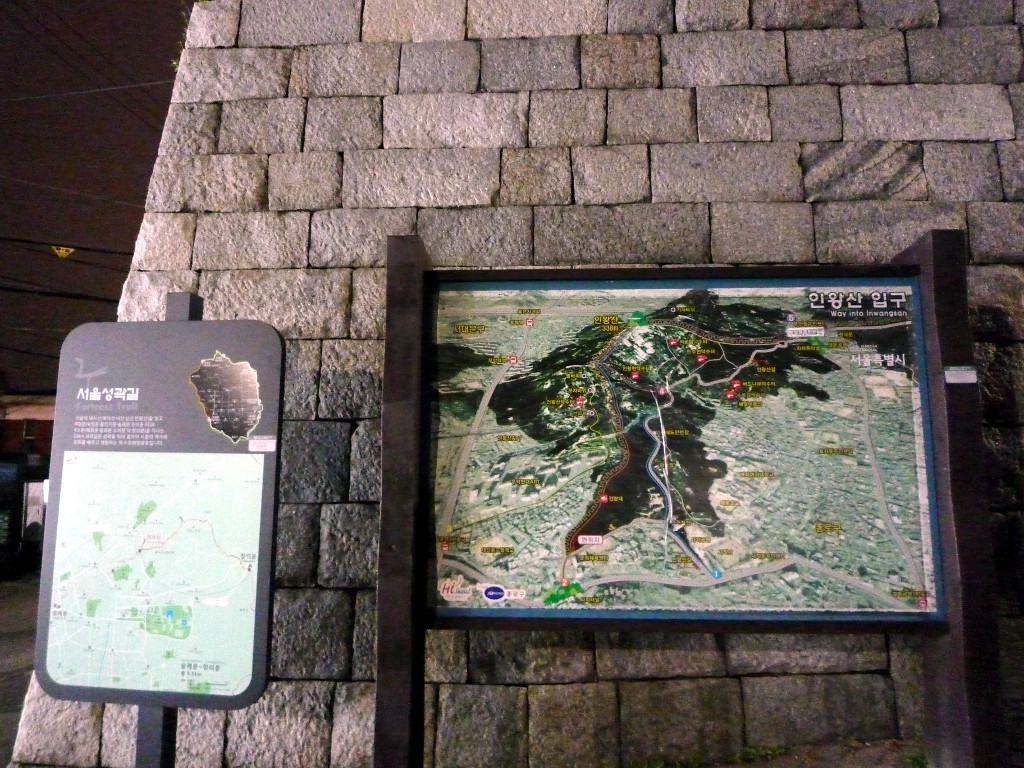 This part of the wall is obviously a pretty recent reconstruction and might not even be very accurate but it's obviously in pretty much the original place. There's a path going steeply up the hill and the wall did connect the tops of the four mountains surrounding Seoul's old centre.

The only problem is the signs are all in Korean and translating the labels is not giving me much helpful other than "current location", "Culture and Sports Center", and the name of a church, none of them turned up anything definitive searching Google Maps in English or Korean. The location is the tip of the bottom left point of the dark area on the map but I'm almost certain that North is not at the top of the map - it's rotated for best fit. Here's a close-up of the map which shows this edge of the wall along with the modern roads etc: 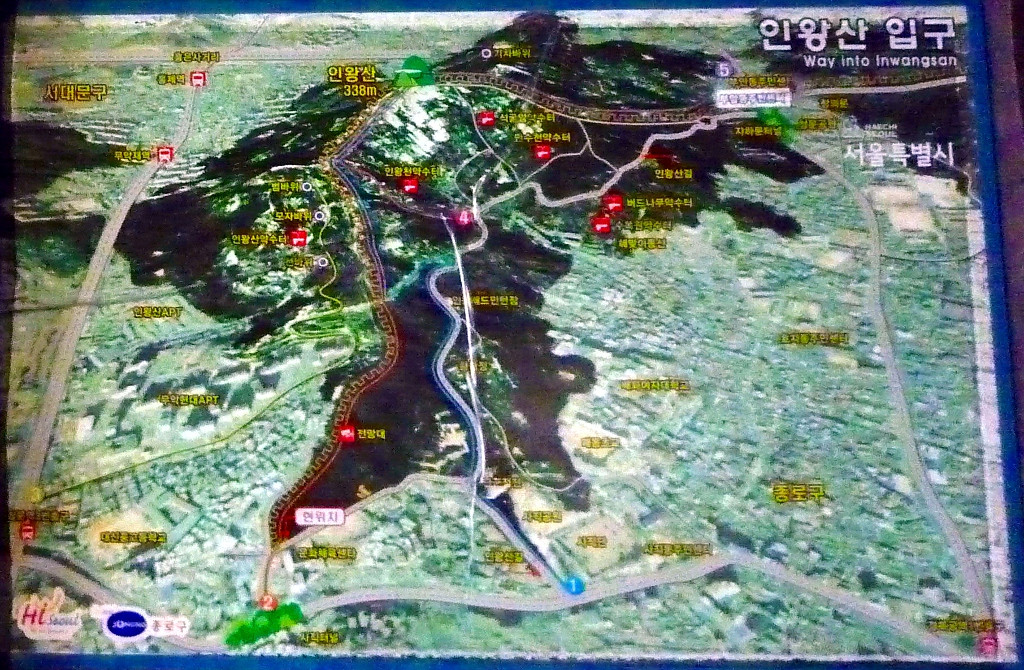 There was also this schematic map of just the wall without any details of the modern city, also only in Korean: 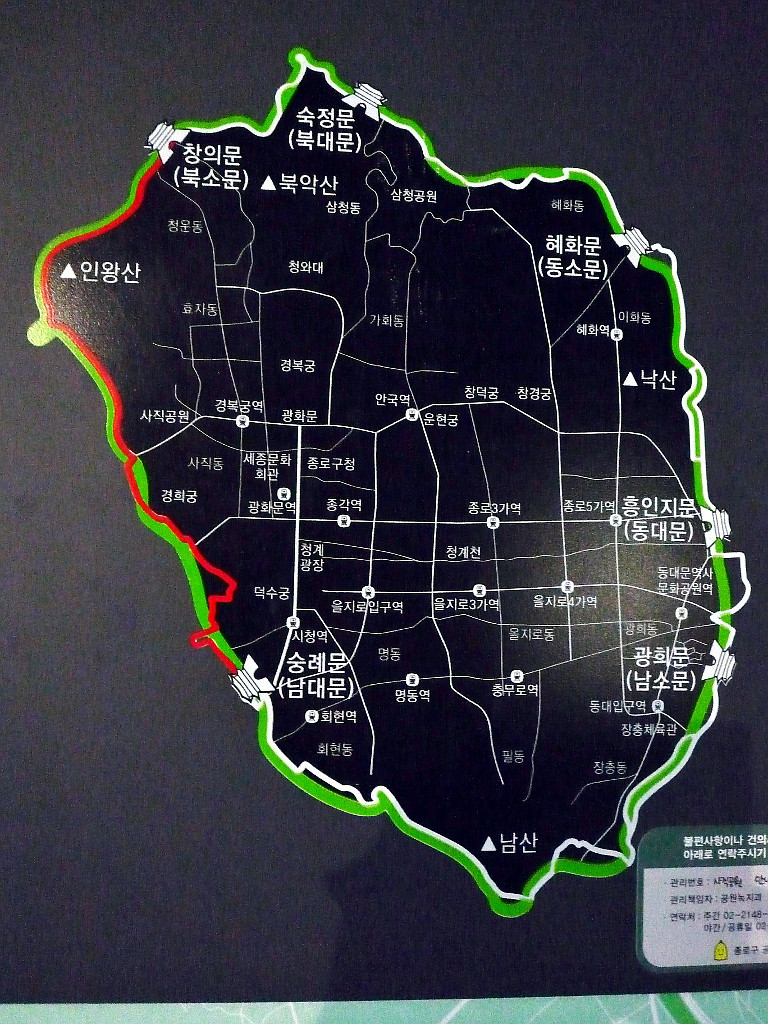 I'm uncertain of the position on this map though the bottom end of the red line seems sensible.

If anybody can pinpoint this location from the maps and the Korean labels it would be greatly appreciated.

As it was late and cold and I didn't expect to be here I didn't follow the wall path up the hill because it was the wrong direction for getting home. But as I headed off I finally found one sign in English: 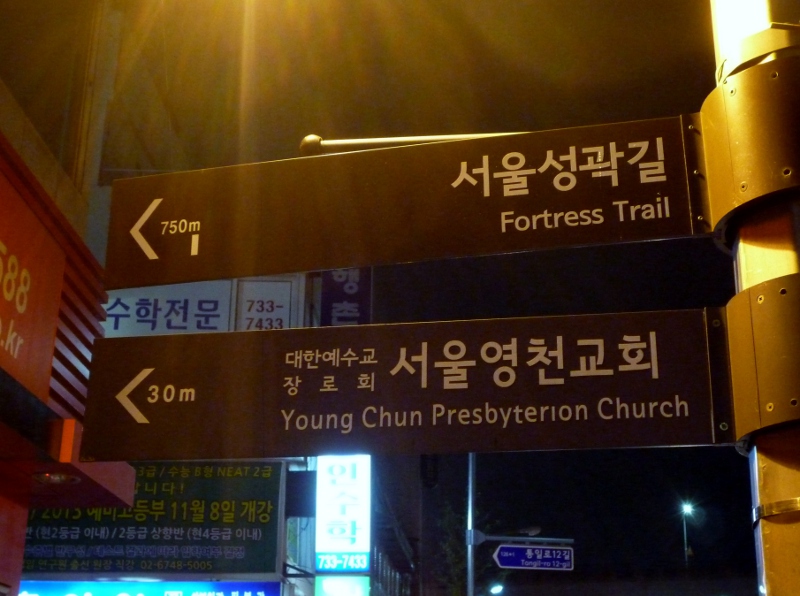 Not the answer you're looking for? Browse other questions tagged architecture walking seoul or ask your own question.

9
Can you visit the Lille Citadelle?
12
In which city is this building with the inscription "domus dei et porta coeli"?