Can you visit the Lille Citadelle?

Looking on a city centre map of Lille, I spotted a very interesting looking 5 point Citadelle at the edge of the old town, as handily shown by OSM: 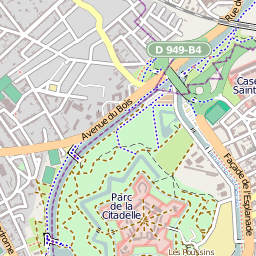 I wandered over there, and saw some impressive looking walls and ramparts, but after a short walk round part of the surrounding park I couldn't spot anything about being able to go in.

Is the Citadelle generally open to tourists? And if not, are there any times when you can visit the inside of it?

Assuming that this page (which also has more details about the citadel and what's inside) is still up-to-date, it appears that it is possible to visit only via pre-booked guided tour costing e7 booked via tourist office. So seems that the tourist office should have all the details.

THE CITADEL
...
The Lille Citadel is still occupied by the army and may only be visited as part of a guided tour organised by the Tourist Office. (guided tour only in French).

Following the information that @BrendanMcK found, I headed to the Lille Tourist Office this afternoon to ask them. (As an aside, the tourist office is worth a visit in its own right, as it's in an amazing old building!)

According to the tourist office, they do run tours of the Citadelle, but only on Sundays in the summer. Summer is apparently defined as starting in June, and ending in September. It certainly doesn't extend to October! I was told that they do two tours a day on summer Sundays, at 3pm and 5pm.

We'll need someone to visit Lille one weekend next summer to confirm any further details!

Not the answer you're looking for? Browse other questions tagged architecture lille or ask your own question.

5
Can tourists visit the Citadel of Alessandria?
-1
Which town/city is worth a day visit north/north-east of Paris?

7
Public transport journey planner for Lille?
10
Changing trains in Lille - what's the transfer with luggage between Lille Europe and Lille Flanders stations like?
5
How to find a co-working space in Lille as a tourist?
9
Can you buy Eurostar Brussels-Lille tickets on the day, for the same price as in advance?
2
Is there an ATM in Lille Europe station?
2
What is the cheapest way, by public transport, of getting from Tournai to Lille airport?
1
How can I get to Lille airport by public transport, avoiding the shuttle?
9
Lille Metro schedule… is it 24/7?