Statistically, is there a safest seat on the plane if it crashes?

So to clarify, there are lots of different planes, so for the sake of argument, there are areas:

So that's 18ish possible safe zones in the plane. Is there a particular area that statistically people have survived more (or less) in?

An important factor is that seats closer to an exit improve your chances after a crash landing, in case the plane catches fire (very common) or sinks underwater.

Contradicting the Popular Mechanics study, the University of Greenwich found that

A seat up to five rows from an exit offers a better than even chance of escaping if there's a fire, according to researchers from the University of Greenwich commissioned by the Civil Aviation Authority.

When seated six or more rows from an exit, however, 'the chances of perishing far outweigh those of surviving'.

Whether the seat is on the aisle or not only makes a 'marginal' amount of difference, the study shows.

The scientists checked the accounts of 2,000 survivors in 105 air accidents around the world.

When it comes to surviving a fire, those seated in an aisle had a 'marginally' higher chance of surviving – at 65 per cent – than those seated by a window (58 per cent). 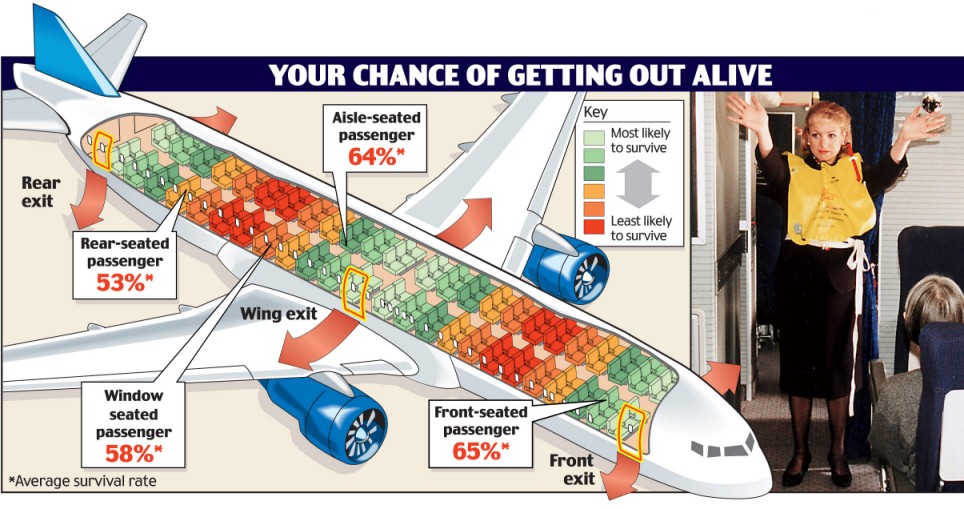 This question is difficult to answer, there are many types of crashes. If the plane stalled most likely it will fall down on its tail. If the plane spins then God knows! and if the plane splits into pieces while air borne then no one is safe!

Let's talk about normal crash landing where the pilot is forced to land the plane in a desert or a field or any other area other than airports. Lately, Discovery Channel arranged a controlled crash landing for the first time to research this exact point, A Boeing 727 were crashed in Sonoran Desert to come up with the answer to this question and the funny fact is, The seats at the back of the cabin are the safest seats on a plane in case of crash landing. So the research somehow suggests that you go cheap and get an economy class ticket if you are concerned about crashing :)

Read more about this experiment here or here.

This is a photo of the crashed plane right after hitting the ground, the front part of the plane had the biggest impact 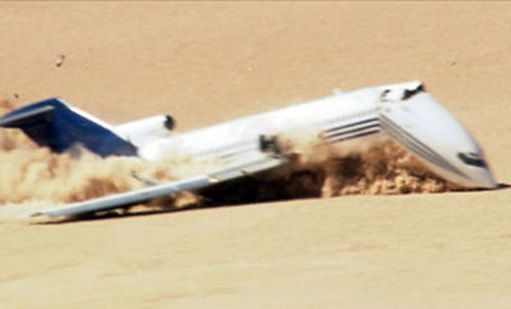 Any way, Statistically speaking, according to the research made by Popular Mechanics the seats at the back of the plane have better odds of survival. 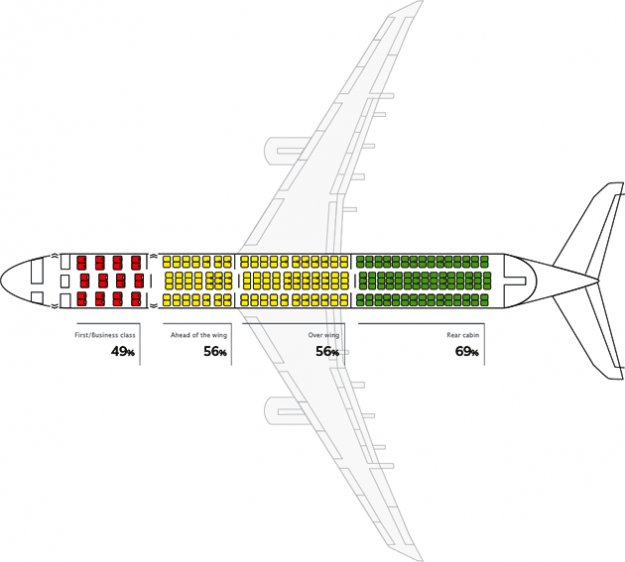 To sum that up, the farther back you sit, the better your chances are to survive a plane crash.

The Telegraph has just published an article entitled "Which is the safest seat on an aircraft?".

They refer to a documentary "The Crash" on the subject, where:

After hitting the ground, the front of the plane and the first 11 rows of seats – usually reserved for first-class, business-class or premium-economy passengers – were ripped off. A force of 12G was recorded in this section of the aircraft. Further back, the force fell to around 6G. Experts concluded that none of the plane’s first-class passengers would have survived, but 78 per cent of the other passengers would have, with the chance of survival increasing the closer they were sitting to the rear of the aircraft.

They also talk about a Popular Mechanics study from 2007:

The magazine analysed all crashes since 1971 and found that those in rear seats (behind the wing’s trailing edge) were safest – survival rates were 69 per cent as opposed to 56 per cent over the wing and 49 per cent for those at the front of the plane.

“One seat is as safe as another,” said a spokesman for Boeing. “Especially if you stay buckled up.”

“the safest aircraft is one that doesn’t crash and is well maintained”.

Flying is very safe. The odds of being killed on a single flight are 1 in 4.7 million, according to the website planecrashinfo.com.

But you might raise that figure slightly by sitting in economy class, with your seat belt fastened, by the window, within a few rows of an emergency exit.

Choosing an aisle seat on the back is the best compromise choice to maximize your chances against both risks, that is, you consider the possibility of either a crash or a fire, and only if assuming that if there is an accident it will be a 50-50 chance or one or the other. If that ratio is far from 50-50, the choice changes.

If there are more crashes than fire, the recommendation stands, and if there is much more fire, than it's better to be close to the wing. So it's now a matter of knowing the fire-to-crash ratios.

Not the answer you're looking for? Browse other questions tagged air-travel safety aircraft statistics seating or ask your own question.

34
Where is the safest place in a train?
5
Car Seats in Saudi Arabia
32
Which airplane is the safest?
11
Are there any advantages to selecting the middle seat in an airplane?
9
Airplane seat dimension regulations: are there any?
4
What is better for mobility limited on Spirit: nonstop or big front seat?
5
Is the space in front of the first seat row in the middle of a cabin meant as a public passage?
24
Why are seats at the rear of a plane sometimes unavailable even though many other seats are available in the plane?