Japan's most famous geisha are from Kyoto, Japan's former capital and still a major cultural capital of Japan. But I've also heard of onsen geisha, far away from the big cities, who are at the bottom of the pecking order of geisha.

Do such geisha still exist nowadays? Geisha have become much smaller in number over time, and I'm wondering if onsen geisha were the first to disappear. Is it possible to see, or better yet socialize, with onsen geisha nowadays?

Are most geisha who perform in onsen towns necessarily "onsen geisha"? When searching for onsen geisha, I often got hits for "[location] onsen geisha", such as One of Nagano’s “Treasures” — The Togura Kamiyamada Onsen Geisha.

How do onsen geisha differ from their big city counterparts? I assume that they are less expensive, but apart from that, do they tend to have a different persona? Are the geisha games available different?

"Onsen Geisha" is rather a locality issue than a "what do they do" issue. Towns that are famous for onsen have sometimes stage shows in hotels that anyone who visits can see.

You can however just as well have a private performance such as in this place:

If you want to have a private performance however, there is a risk that they do not let you in as a foreigner, unless you have local people to come with you. Japanese are often afraid that they do not speak English well enough, and if you get drunk and cause trouble, they cannot handle it.

Another place to see onsen geisha is Higashiyama Onsen, which is in Aizu Wakamatsu, Fukushima province. (Thanks Immortal Geisha user Hisayakko) I had dinner with two geishas from Higashiyama Onsen there.

I booked an evening with geishas via the Higashiyama Onsen Tourism Association. Their page about geishas (in Japanese) is http://www.aizu-higashiyama.com/geigi/geigi.html

I hired a volunteer (not professional) translator via the Aizu Wakamatsu International Association. The translator was only available on a limited number of days, so it's advisable to contact the association sooner rather than later while planning your trip.

For the Tourism Association and the Hotel New Palace, I communicated by email in Japanese, thanks to fellow Travel Answers user Chocolate.

The geishas I had dinner with spoke a bit of English. I can't really say how much English they could speak, because having a translator available meant they mainly spoke in Japanese. They had had foreign customers before the Tohoku earthquake and Tsunami, but none since. They hope to see more foreigners come!

As well as talking, one of the geishas performed two dances while the other played the shamisen, and we played some ozashiki asobi (geisha games).

I didn't ask an awful lot of questions about what geishas were during the evening, so I didn't even ask them if they considered themselves onsen geishas, let alone what an onsen geisha is, but I had a great time! 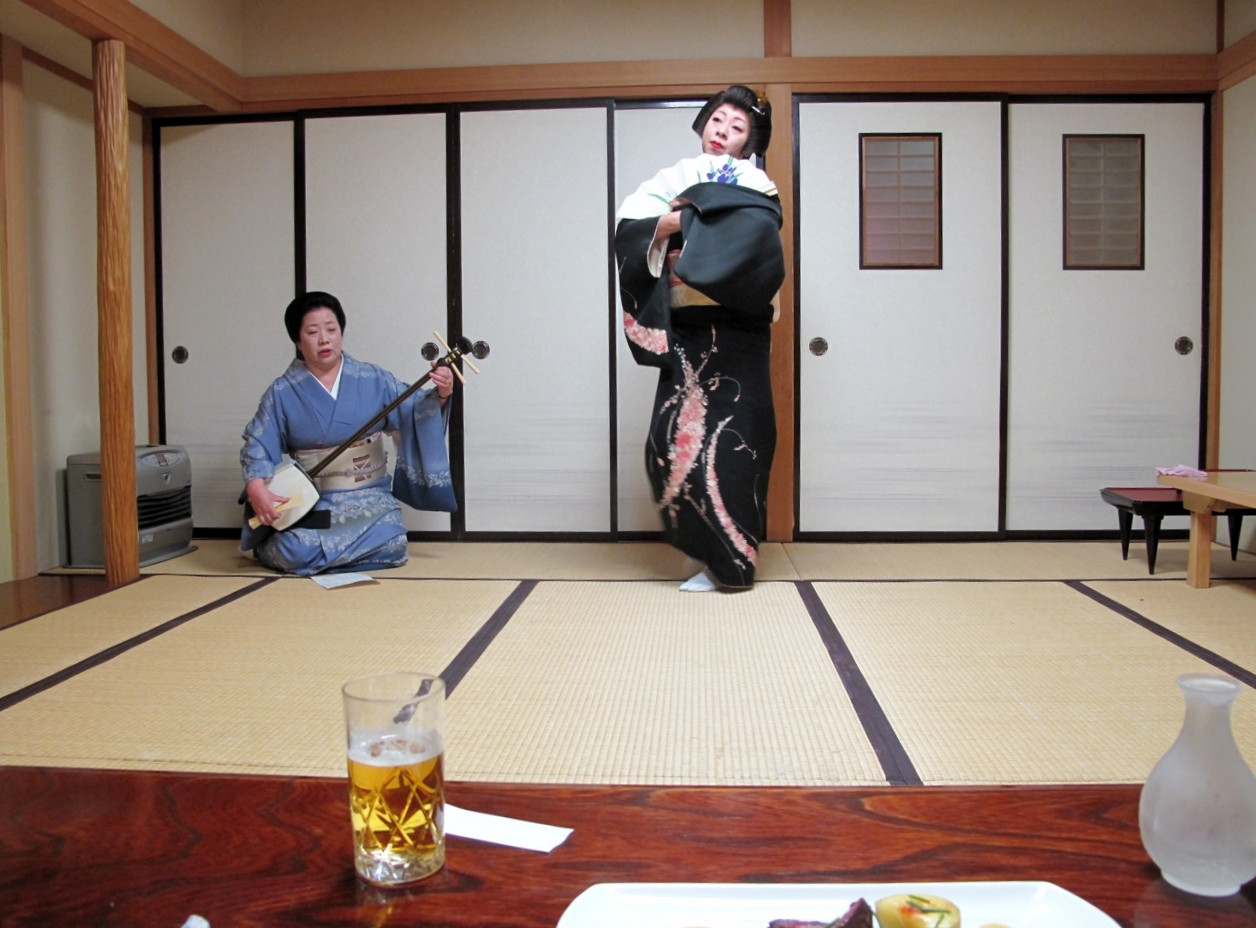 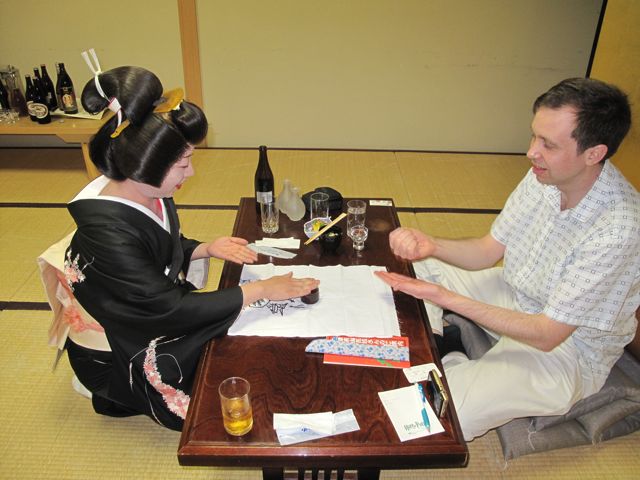 (I checked if posting photos on the internet was ok, and it was - in fact, my translator posted some photos while I was still on my trip)

Not the answer you're looking for? Browse other questions tagged japan culture hot-springs entertainment or ask your own question.

7
Are there Onsen towns with both skiing and geisha?

4
How common are onsen that require swimming costumes in Japan?
15
Can solo travelers go to a mixed gender onsen?
7
Are there Onsen towns with both skiing and geisha?
14
Can foreign tourists see Pakistani dancing girls?
18
Is it possible for tourists to enter/attend Japanese Game Shows?
19
What is the proper etiquette at Japanese onsen?
5
Can tourists meet mikos (Japanese Shinto shrine priestesses)?
17
Are onsen attached to hotels available to non-staying guests?
19
What to do with long facial hair in the onsen?
2
Are there public onsen in Ogoto Onsen?