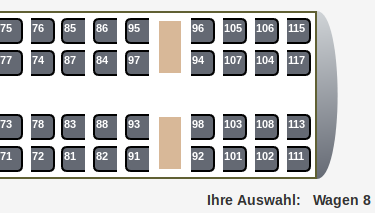 5
What's the point of reserving a seat when purchasing an Off-Peak/Anytime train ticket with National Rail?
10
How do I find out how long a UK train should be, in advance online?
27
Luggage etiquette on European trains
8
How do I book a seat reservation on ICE International, when I already have the ticket?
14
Are these Deutsche Bahn train seats side-by-side?
1
Documents for travelling within the Schengen region
10
Why do almost all international trains to Russia show as sold out?
12
Corridor seats on the TGV — why? Are seat reservations not always mandatory?
6
How should Chinese citizens go about returning to China?