Caught in Czech Republic for travelling with invalid ticket

Recently, I spent the weekend in Prague. I had purchased a 24h transport ticket and validated it in my first visit using a Tram (at 10:45). At the end of the day, I was stopped in a metro station and asked for my ticket. I presented my ticket. They said I was using a ticket which was validated one week ago. I argued that I had bought the ticket on the day and even showed them a receipt which I received after purchase. They did not believe me and took me to another person who forced me to pay 800 Czech crowns as a fine. They said if I refused to pay, I would be taken to the police station.

Attached along with here is a ticket. I had purchased it on 27th August and validated it on the same day. They claim it was validated on 21st. It was a frustrating experience.

I am looking out for tips in the future as to how to avoid such mishaps. How can I prove my right in such cases? Was I scammed? 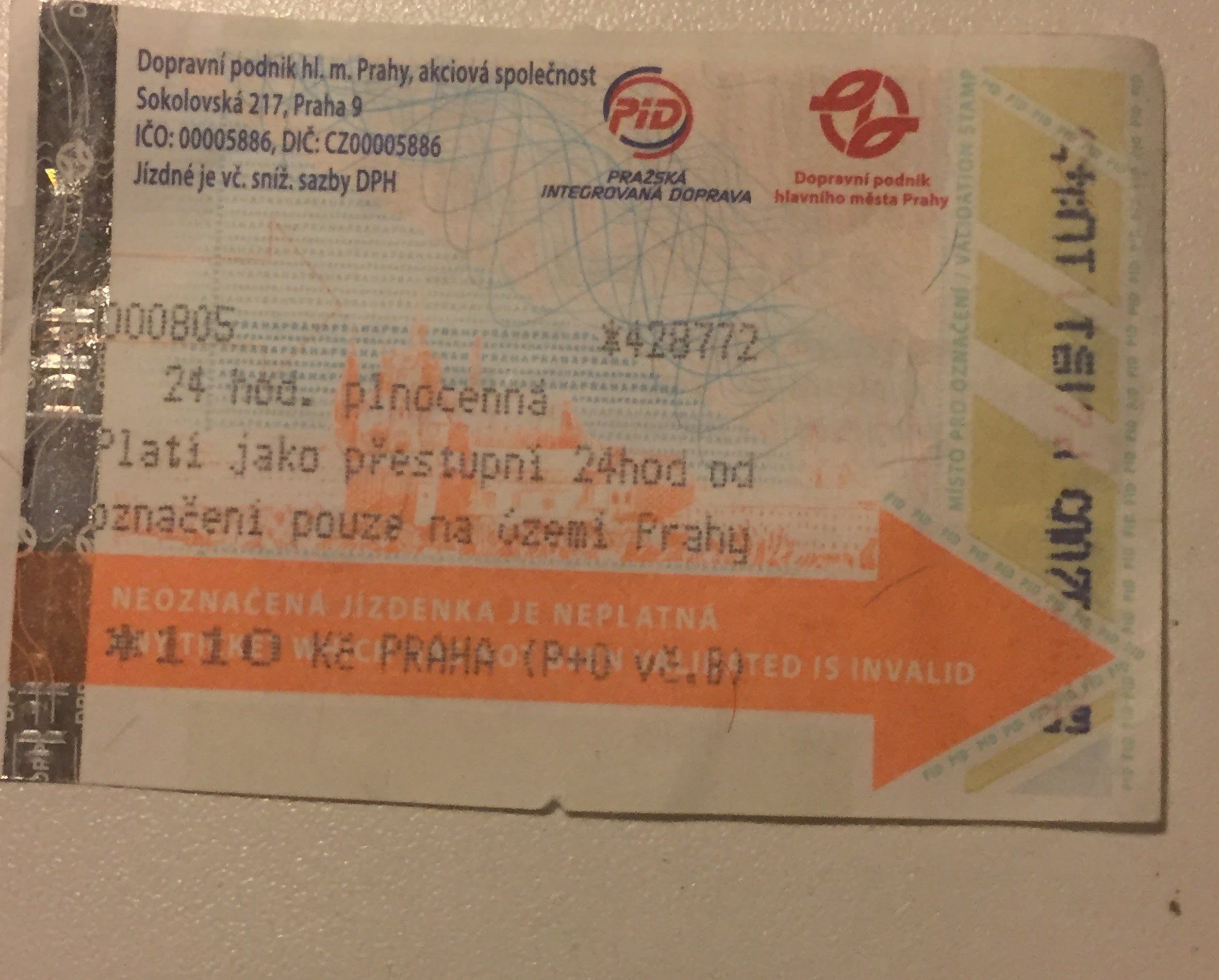 The stamp on your ticket is so poor, that it is really difficult to read. It does indeed say Aug 27th, but it can very easily be read as Aug 21st:

The stamp actually reads 'P27Ⅷ17', but the uppermost line of all characters is missing, so it could even easily be misread as 21st July (21Ⅶ). The last digit (7) is so weakly printed, that you can barely see it. Even on your stamp, it is pretty obvious that the digits before and after the Ⅷ are different.

If you look at the font used by the Prague ticket validators and the digits 1 and 7 properly printed, you can see that if the upper horizontal line of a '7' digit is missing, there is only the rightmost vertical bar left, which can easily be read as a '1'. The digit '1' is however printed with a horizontal bar at the bottom, with a vertical line rising from the center.

To avoid such situations, you could have seen yourself that the stamp is very hard to read. Depending on wether you want to waste time or money to solve the problem, you could either have made an attempt to replace the ticket at a ticket office, or bought a new ticket and stamped it in a different validator. The problem had likely been solved if you had let the ticket inspectors take you to the police, but you might have lost even more time.

They did not believe me and took me to another person who forced me to pay 800 Kronas as a fine. They said if I refused to pay, I would be taken to the police station.

Ticket inspectors cannot make you pay anything. As outlined on the official Prague Public Transport website:

The authorized person is entitled to:
...

Therefore you have the right to refuse payment on the spot and simply show them your passport. They are authorized to write down the details and issue you a fine, which you may pay (or contest) later on. They could only ask you to go to the police if you refuse to provide your passport/ID, at which point the police will find out your personal information. The ticket inspector is not authorized to use force, as he's merely an employee of the transport company rather than a police officer.

How can I prove my right in such cases?

Before giving your passport to the inspector, ask that he writes the reason for the fine on the penalty paper and puts his signature down, so that you can prove the origin of the dispute because otherwise you wouldn't be able to show the 1/7 confusion was the source of your problems. After you have the penalty statement, you may visit the Penalty Fare desk and contest the charge.

However I wouldn't set my hopes too high — the public transport authority would usually only accept disputes over personalized monthly tickets, rather than anonymous temporary ones, since it's hard to prove you didn't get someone else's ticket after you've received the fine.

We cannot know for certain, but future readers could be advised to avoid paying anything on the spot if they have doubts about the legitimacy of the ticket inspector. Instead, one can take the penalty paper and pay it in cash at the Penalty Fare desk or pay online using a bank transfer.

If the public transport agent insists on paying on the spot, I'd advise calling the police myself to sort it out, as it's likely that those people are scammers. Do not worry about issues with the police, they're much more pleasant than the ticket inspectors.

As an additional point aside from the other answers, you should always try to make sure you are being stopped by real ticket collectors:

Also remember that legally, ticket collectors are not police and so:

(Also source: 25 years living near and commuting to Prague)

As far as I know (empirically, after living in Prague for about a decade) it doesn't matter where (on which side of the ticket) exactly the stamp is as long as there is only one. This way I recommend to prefer stamping the rear side of the ticket where there are no pictures so the stamp will be easier to read.

I was in Prague, though this was a couple decades ago, and was confronted by a group of young men, one or two of which were in at least partial uniform, who said I had done something wrong and needed to pay a fine. I was clearly a foreign visitor, and they were clearly not an official police unit, and the idea I should pay them a cash fine on the spot was clearly not a reasonable legal policy. But the amount they were asking was quite small due to the conversion rate, so I paid it to avoid them.

On the same visit to Prague, I also encountered groups of young men trying to charge to enter public lavatories. In that case, I just glowered at them and walked in without paying, which also worked.

Your case sounds like the same pattern, but a more recent flavor. Your ticket was valid or at worst, unclear, and demanding immediate payment on the spot seems like a scam tactic.

I am looking out for tips in the future as to how to avoid such mishaps.

IMHO the best is to buy ticket with cell phone. There are three possibilities:

You just show the text message :).

Not the answer you're looking for? Browse other questions tagged public-transport tickets prague tourist-traps or ask your own question.

14
Paying with Euro in Czech Republic
10
What happens if you don't "collect" an Oyster top-up or transfer in time?
10
Is there any way to "Unload" credit for a Lisbon Viva Viagem card?
5
Amtrak - Why can she not buy two tickets for herself?
10
Where to buy/top up public transport tickets in Lisbon?
7
Public transportation tickets in Washington DC / arriving at Dulles Airport (IAD)
5
Do I need to validate train tickets that were purchased online?
9
How to pay for a single ticket to the driver of the public bus in Lübeck/Travemünde, Germany?