What power supply is needed to use a CPAP machine in the EU?

I'm about to take my CPAP machine outside USA for the first time (to Spain and Italy). Here is the power brick's label. 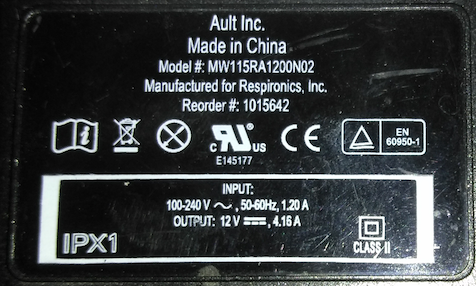 The last time I had a similar problem was when I took an electric typewriter to Switzerland in 1976, before t.se existed!

As such you only need a plug adapter, which only changes the shape of the plug but does not do anything to the power going through it.
If you have a wall cord that fits the brick and is the European kind, you can use that.
But I would just buy a plug adapter.

From that picture I can not work out whether it has a two pin plug or a three pin one.
If a three pin, one with grounding, you have to be careful to get a grounded adapter plug, one that fits Italy and one that fits Spain, (which might be the same or might be a different one.)
If it is a two pin, so without grounding, any two pin 'Euro plug' adapter plug will do, it are the three pin ones that are different for different countries that all use the same two pin Euro plug.

There are several kinds of plug adapter, you can use the smaller kind that is lighter and easier to transport.

From the label this power supply does not have an earth, it is Class 2 double-insulated (the symbol of one square inside another, just above where it says "Class II").

This is described in and article on the BBC website http://www.bbc.co.uk/schools/gcsebitesize/science/edexcel_pre_2011/electricityworld/mainselectricityrev4.shtml

Not the answer you're looking for? Browse other questions tagged electronic-items power or ask your own question.

19
Is there a standard power adaptor to use on airplanes?
7
What kind of power sockets do Jet Airways' Boeing 777s have?
5
Power supply stabilizer or inverter for use of European laptops in Laos?
2
Philippine Airlines - power supply in economy
1
What power adapter do I need to use when traveling to the US?
8
What powerbank can I use on the flight?
8
Power outlets for passenger use in Gatwick Airport
2
What is a travel-friendly light alarm or travel-friendly uninterruptable power supply for a light alarm?