I recently took a ferry from China to South Korea and back. Before I left I was looking for information about the different routes. These Q&A's contained some good information:

But not really very much information about the lesser traveled routes. Almost all of the routes go through Seoul (Incheon) so while I was there I got as much information as I could with the purpose of writing a self-answer Q&A when I got back.

I'm back now and my answer is below.

There are quite a few routes to travel by sea between China and South Korea. Most of them go through the Port of Incheon and that is what my answer will cover.

The following is a map from the Port of Incheon. It shows the passenger routes to China. I added the English names in white. 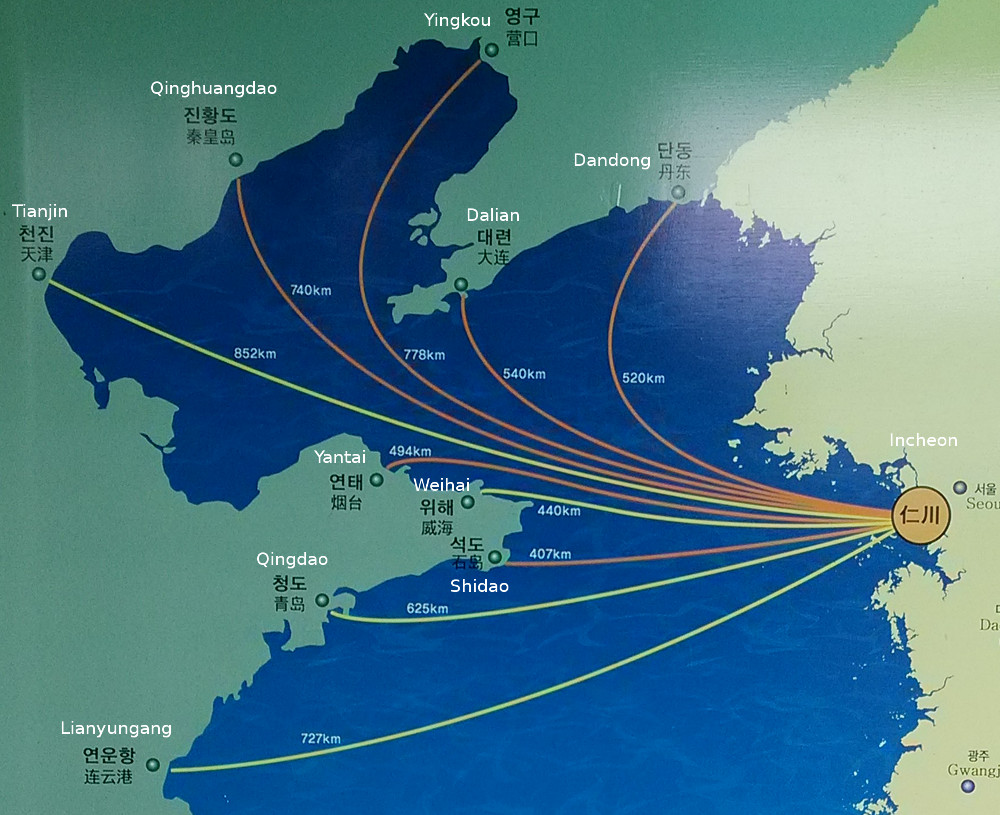 It is easy to get from Incheon to Seoul by subway.

Here is a table showing the schedules to the different cities. The image comes from the information desk at the Port of Incheon. 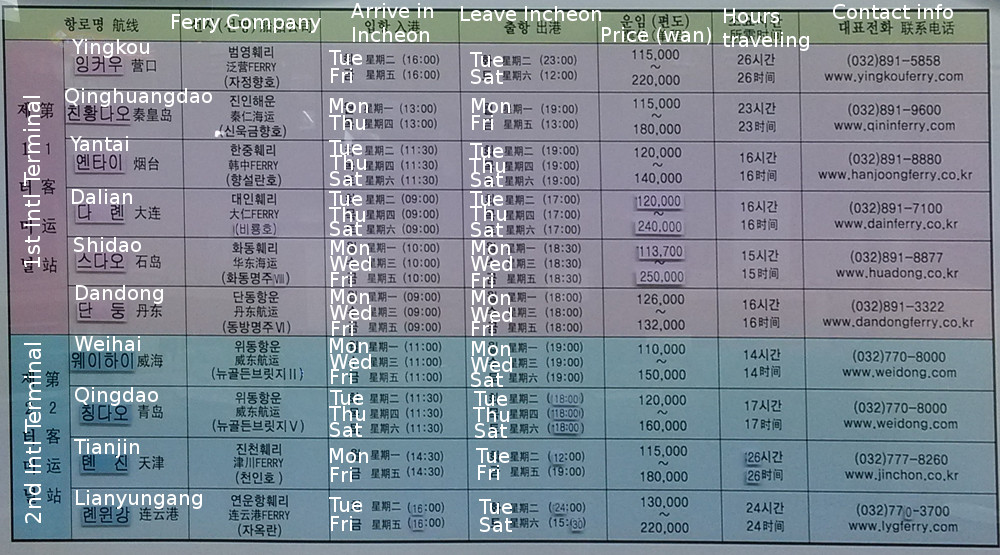 (If someone wants to edit my answer and put this in text form, please do.)

You can figure out the time that the ferry leaves or arrives in the Chinese ports by adding or subtracting the travel time from the arrival/departure time in Incheon.

It should be noted that ferry service may be suspended at times. I imagine for a bad storm, for example. Also, I think at least the Weidong ferry stops running during Chinese National Holiday and Chinese New Year.

It appears that the tickets are all around 120,000 wan ($120) for economy. However, when I took the Weidong ferry it was discounted to about 75,000 wan. You might be able to get a discount if you by round trip tickets, too.

Every time I've taken the ferry I always just get to the ferry terminal at least 3 or four hours early and just buy my ticket when I get there. They never seem to be sold out. However, it is possible to buy tickets early. I just learned that you can do it with Ctrip. I will probably try that next time. But if you can't figure out how to get it beforehand, just arrive early at whatever harbor you are leaving from and buy it there.

You have to pay for the tickets in the currency of the country the port is in (of course).

The ferries are not cruise liners but they are a very nice way to travel.

I always buy economy tickets (which are supposedly mats on the floor) but I have gotten a free upgrade to a bed every time.

There are showers and public bathrooms, which are kept fairly clean in my experience.

There are dining halls. Sometimes the meals are included in the ticket price (Tianjin ferry) and sometimes they cost extra (Qingdao ferry).

You can walk on the deck or observe the passing water from behind windows.

Getting to and from the port

There are two ferry terminals in Incheon. From the map they looked pretty close but it turned out to be an hour and a half walk between them. The bus was much faster on the way back. 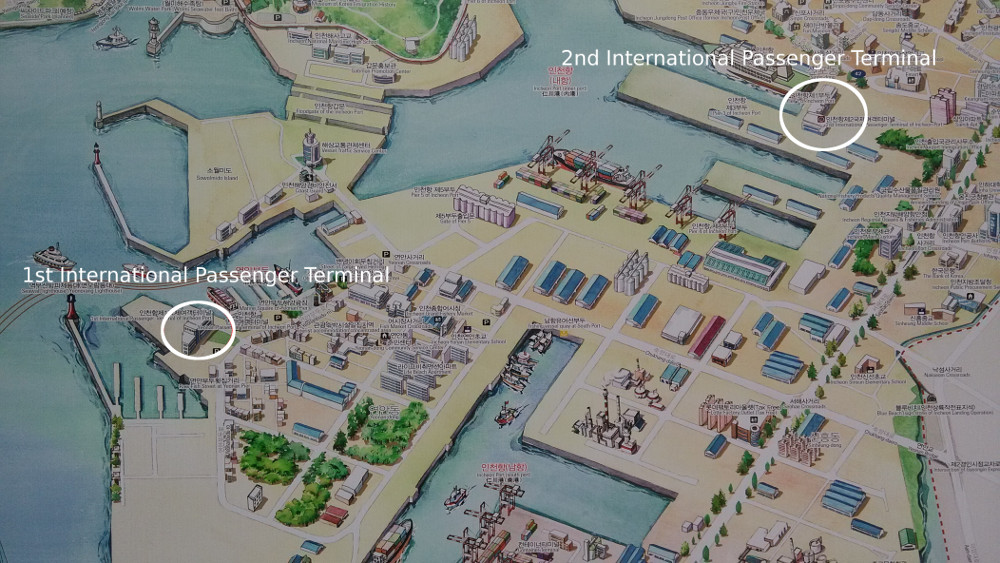 The Sinpo subway station is on the street very close to this ferry terminal. Here is a map. 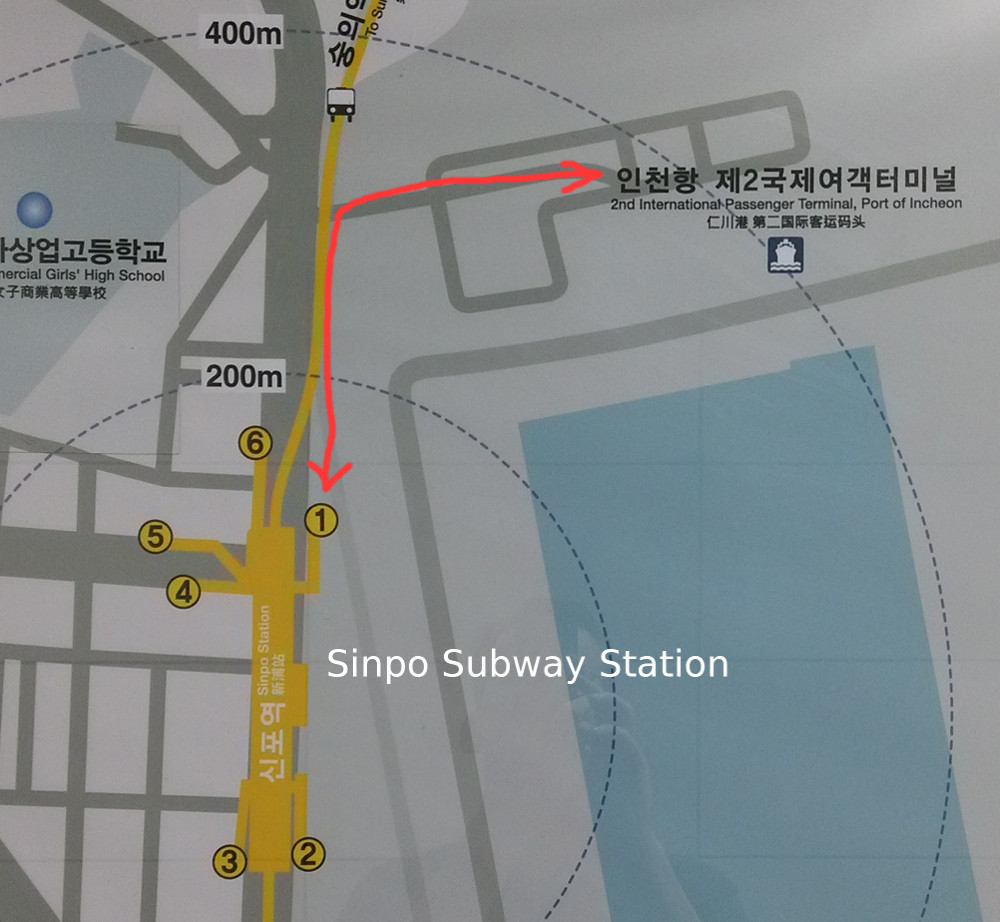 You can get to or from the Sinpo station by going to the nearby Incheon Subway Station, which is at the end of Line 1.

Although I haven't traveled from this terminal, I went inside and looked around. It is bigger than the 2nd terminal and there are ticket counters for each of the cities listed above for this terminal.

To the right of this terminal there is another building that appears to be for domestic ferry travel.

I'm not aware of a subway stop near this terminal, but you can take bus 24 to or from the Sinpo Subway Station.

If you are going to Tianjin by train, then go to Tanggu (塘沽) rather than Tianjin. The actual stop for the high speed train is Yujiabao (于家堡). Even from there it is quite a long taxi ride to the harbor. Tell the taxi driver to go to 天津国际邮轮母港. This is not the easiest harbor to get to. The timing was also a little tight getting there in the morning before the ship left. But it worked out and it was a very nice trip.

The ferry terminal is not that far from the train station so it is quite convenient to get in and out here. As I recall, busses 8 and 303 both made the trip. A taxi ride shouldn't be too expensive, either.

Feel free to update this post (or add another answer) if you have experience taking the ferry out of other cities.

The following websites are not all in English but with a little Google Translate magic, you should be able to navigate them.

I tried to book a ticket China -> South Korea today.

In my experience, there is no way to buy a ticket in Beijing. I have been to and called different places that are supposed to do it (For example- CTA Ticket Office and Beijing CTA ticket office, both in Jianguomenwai Dajie) and it looks like the service does not exist anymore.

If you plan to go from Tanggu to Incheon, you can directly give a phone call to the company and ask for an English speaker. The phone number of the company is 022 2579 6201. They will ask you to provide all the information needed for the booking (date, class, passport id, name etc). Payments are supposed to be made just before getting on the ferry and so they ask you to be present for departure early. However, I found the prices to be REALLY more expensive than what was expected (1703Yuan, ~ 256USD in August 2017).

So I decided to try to get the Quingdao to Incheon which seems to be the cheapest ticket. The booking is also easy - you can send a private message to them using Facebook (search for Weidongferry reservations), giving all the information needed for the booking.

I never had any answer to my facebook booking. I decided to keep it simple and went to the harbour terminal 4hours before the boarding time. No trouble to get the cheapeast ticket, get "special" discount and upgrade. I only paid 480Yuans (august 2017). The journey take 18hours + 3hours for the boarding procedure so 19hours total.

Not the answer you're looking for? Browse other questions tagged china south-korea ferries or ask your own question.